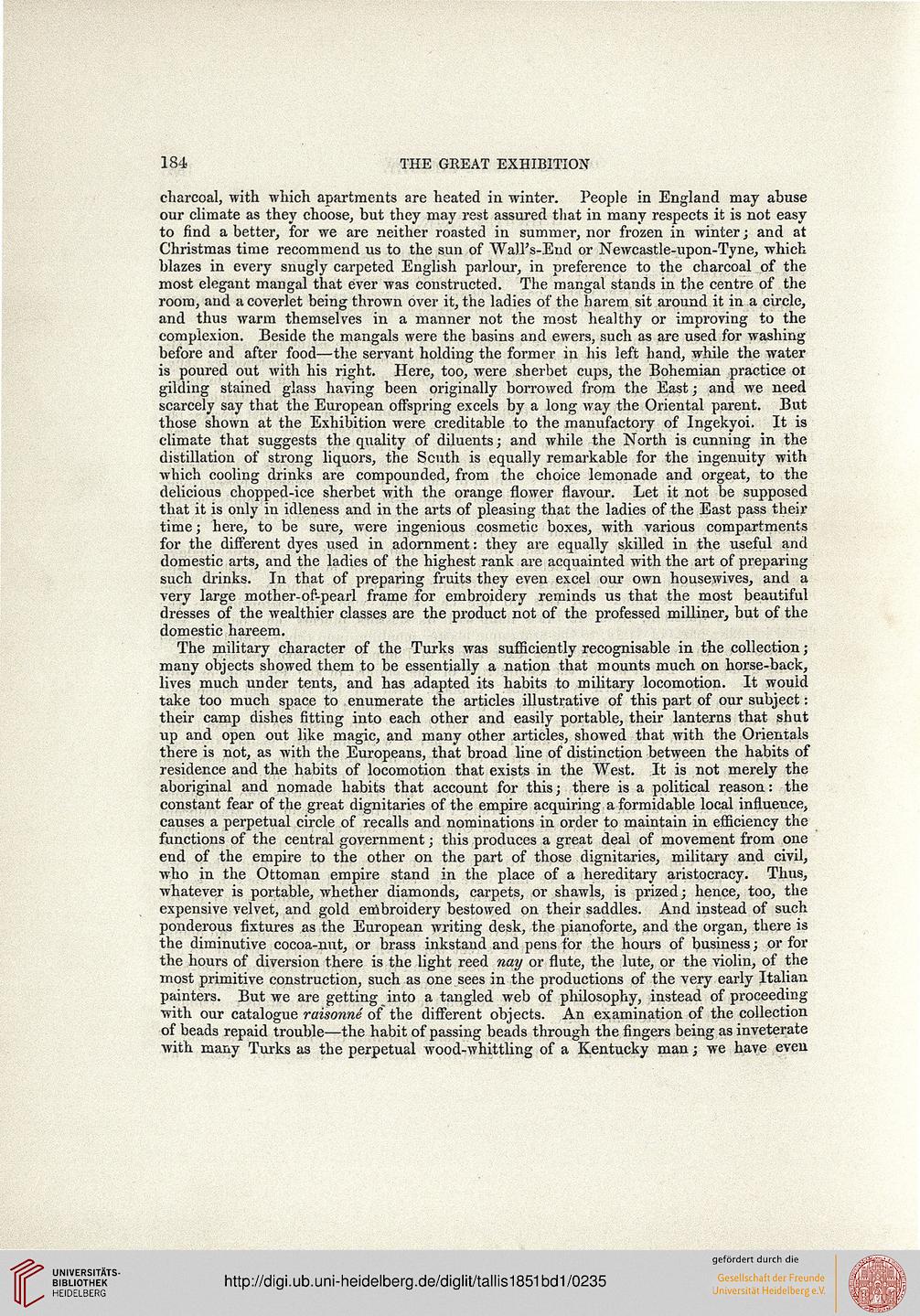 charcoal, with which apartments are heated in winter. People in England may abuse
our climate as they choose, but they may rest assured that in many respects it is not easy
to find abetter, for we are neither roasted in summer, nor frozen in winter; and at
Christmas time recommend us to the sun of Wall's-Eud or Newcastle-upon-Tyne, which
blazes in every snugly carpeted English parlour, in preference to the charcoal of the
most elegant mangal that ever was constructed. The mangal stands in the centre of the
room, and a coverlet being thrown over it, the ladies of the harem sit around it in a circle,
and thus warm themselves in a manner not the most healthy or improving to the
complexion. Beside the mangals were the basins and ewers, such as are used for washing
before and after food—the servant holding the former in his left hand, while the water
is poured out with his right. Here, too, were sherbet cups, the Bohemian practice 01
gilding stained glass having been originally borrowed from the East; and we need
scarcely say that the European offspring excels by a long way the Oriental parent. But
those shown at the Exhibition were creditable to the manufactory of Ingekyoi. It is
climate that suggests the quality of diluents; and while the North is cunning in the
distillation of strong liquors, the South is equally remarkable for the ingenuity with
which cooling drinks are compounded, from the choice lemonade and orgeat, to the
delicious chopped-ice sherbet with the orange flower flavour. Let it not be supposed
that it is only in idleness and in the arts of pleasing that the ladies of the East pass their
time; here, to be sure, were ingenious cosmetic boxes, with various compartments
for the different dyes used in adornment: they are equally skilled in the useful and
domestic arte, and the ladies of the highest rank are acquainted with the art of preparing
such drinks. In that of preparing fruits they even excel our own housewives, and a
very large mother-of-pearl frame for embroidery reminds us that the most beautiful
dresses of the wealthier classes are the product not of the professed milliner, but of the
domestic hareem.

The military character of the Turks was sufficiently recognisable in the collection;
many objects showed them to be essentially a nation that mounts much, on horse-back,
lives much under tents, and has adapted its habits to military locomotion. It would
take too much space to enumerate the articles illustrative of this part of our subject;
their camp dishes fitting into each other and easily portable, their lanterns that shut
up and open out like magic, and many other articles, showed that with the Orientals
there is not, as with the Europeans, that broad line of distinction between the habits of
residence and the habits of locomotion that exists in the West. It is not merely the
aboriginal and nomade habits that account for this; there is a political reason: the
constant fear of the great dignitaries of the empire acquiring a formidable local influence,
causes a perpetual circle of recalls and nominations in order to maintain in efficiency the
functions of the central government; this produces a great deal of movement from, one
end of the empire to the other on the part of those dignitaries, military and civil,
who in the Ottoman empire stand in the place of a hereditary aristocracy. Thus,
whatever is portable, whether diamonds, carpets, or shawls, is prized; hence, too, the
expensive velvet, and gold embroidery bestowed on their saddles. And instead of such
ponderous fixtures as the European writing desk, the pianoforte, and the organ, there is
the diminutive cocoa-nut, or brass inkstand and pens for the hours of business; or for
the hours of diversion there is the light reed nay or flute, the lute, or the violin, of the
most primitive construction, such as one sees in the productions of the very early Italian
painters. But we are getting into a tangled web of philosophy, instead of proceeding
with our catalogue raisonne of the different objects. An examination of the collection
of beads repaid trouble—the habit of passing beads through the fingers being as inveterate
■with many Turks as the perpetual wood-whittling of a Kentucky man; we have even