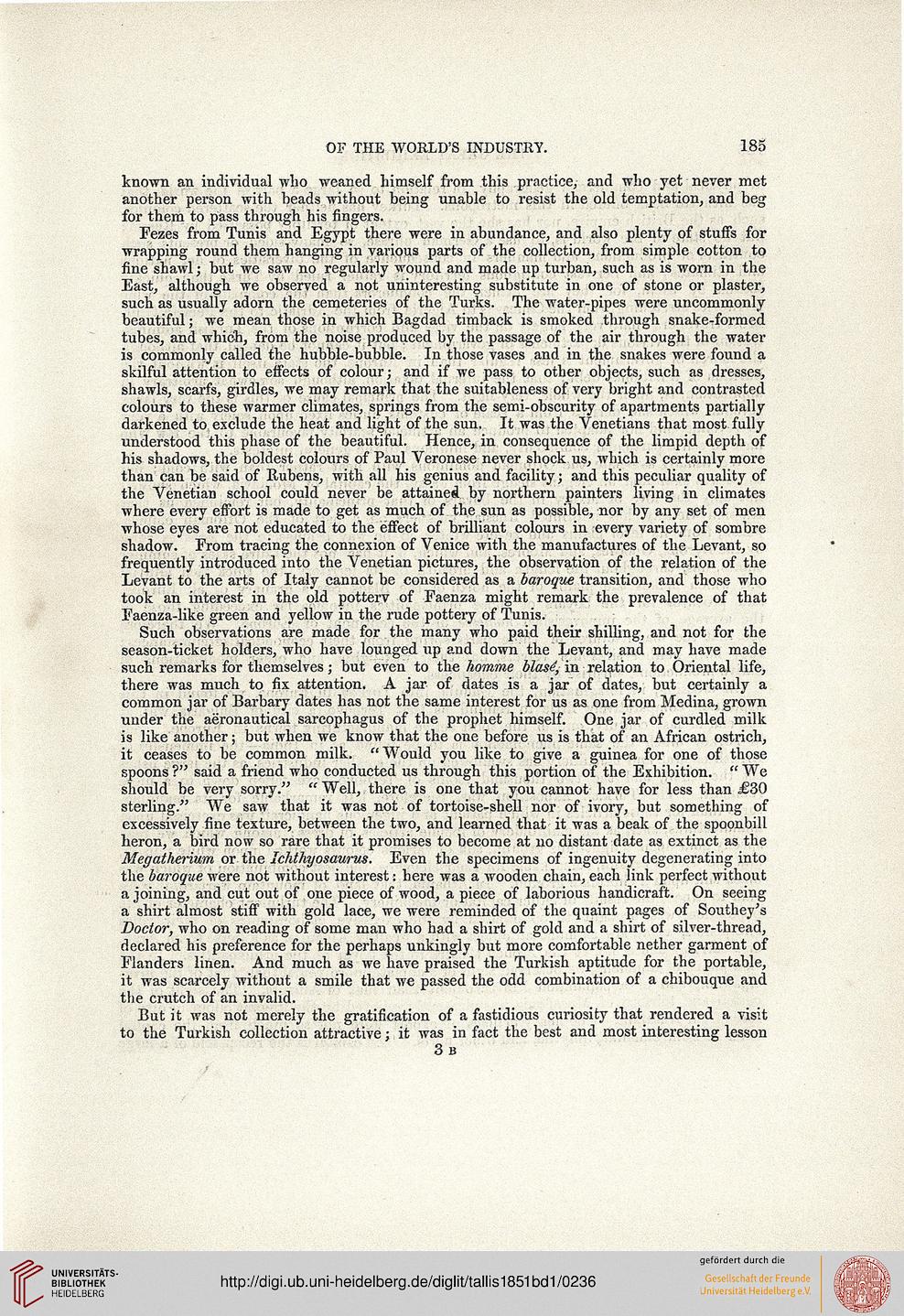 Information about OCR text
OF THE "WORLD'S INDUSTRY. 185

known an individual who weaned himself from this practice, and who yet never met
another person with heads without being unable to resist the old temptation, and beg
for them to pass through his fingers.

Fezes from Tunis and Egypt there were in abundance, and also plenty of stuffs for
wrapping round them hanging in various parts of the collection, from simple cotton to
fine shawl; but we saw no regularly wound and made up turban, such as is worn in the
East, although we observed a not uninteresting substitute in one of stone or plaster,
such as usually adorn the cemeteries of the Turks. The water-pipes were uncommonly
beautiful; we mean those in which Bagdad timback is smoked through snake-formed
tubes, and which, from the noise produced by the passage of the air through the water
is commonly called the hubble-bubble. In those vases and in the snakes were found a
skilful attention to effects of colour; and if we pass to other objects, such as dresses,
shawls, scarfs, girdles, we may remark that the suitableness of very bright and contrasted
colours to these warmer climates, springs from the semi-obscurity of apartments partially
darkened to.exclude the heat and light of the sun. It was the Venetians that most fully
understood this phase of the beautiful. Hence, in consequence of the limpid depth of
his shadows, the boldest colours of Paul Veronese never shock us, which is certainly more
than can be said of Rubens, with all his genius and facility; and this peculiar quality of
the Venetian school could never be attained by northern painters living in climates
where every effort is made to get as much of the sun as possible, nor by any set of men
whose eyes are not educated to the effect of brilliant colours in every variety of sombre
shadow. From tracing the connexion of Venice with the manufactures of the Levant, so
frequently introduced into the Venetian pictures, the observation of the relation of the
Levant to the arts of Italy cannot be considered as a baroque transition, and those who
took an interest in the old potterv of Faenza might remark the prevalence of that
Faenza-like green and yellow in the rude potteiy of Tunis.

Such observations are made for the many who paid their shilling, and not for the
season-ticket holders, who have lounged up and down the Levant, and may have made
such remarks for themselves; but even to the homme blas4} in relation to Oriental life,
there was much to fix attention. A jar of dates is a jar of dates, but certainly a
common jar of Barbary dates has not the same interest for us as one from Medina, grown
under the aeronautical sarcophagus of the prophet himself. One jar of curdled milk
is like another; but when we know that the one before us is that of an African ostrich,
it ceases to be common milk. " Would you like to give a guinea for one of those
spoons ?" said a friend who conducted us through this portion of the Exhibition. " We
should be very sorry." " Well, there is one that you cannot have for less than £30
sterling." We saw that it was not of tortoise-shell nor of ivory, but something of
excessively fine texture, between the two, and learned that it was a beak of the spoonbill
heron, a bird now so rare that it promises to become at no distant date as extinct as the
Megatherium or the Ichthyosaurus. Even the specimens of ingenuity degenerating into
the baroque were not without interest: here was a wooden chain, each link perfect without
a joining, and cut out of one piece of wood, a piece of laborious handicraft. On seeing
a shirt almost stiff with gold lace, we were reminded of the quaint pages of Southey's
Doctor, who on reading of some man who had a shirt of gold and a shirt of silver-thread,
declared his preference for the perhaps unkingly but more comfortable nether garment of
Flanders linen. And much as we have praised the Turkish aptitude for the portable,
it was scarcely without a smile that we passed the odd combination of a chibouque and
the crutch of an invalid.

But it was not merely the gratification of a fastidious curiosity that rendered a visit
to the Turkish collection attractive; it was in fact the best and most interesting lesson