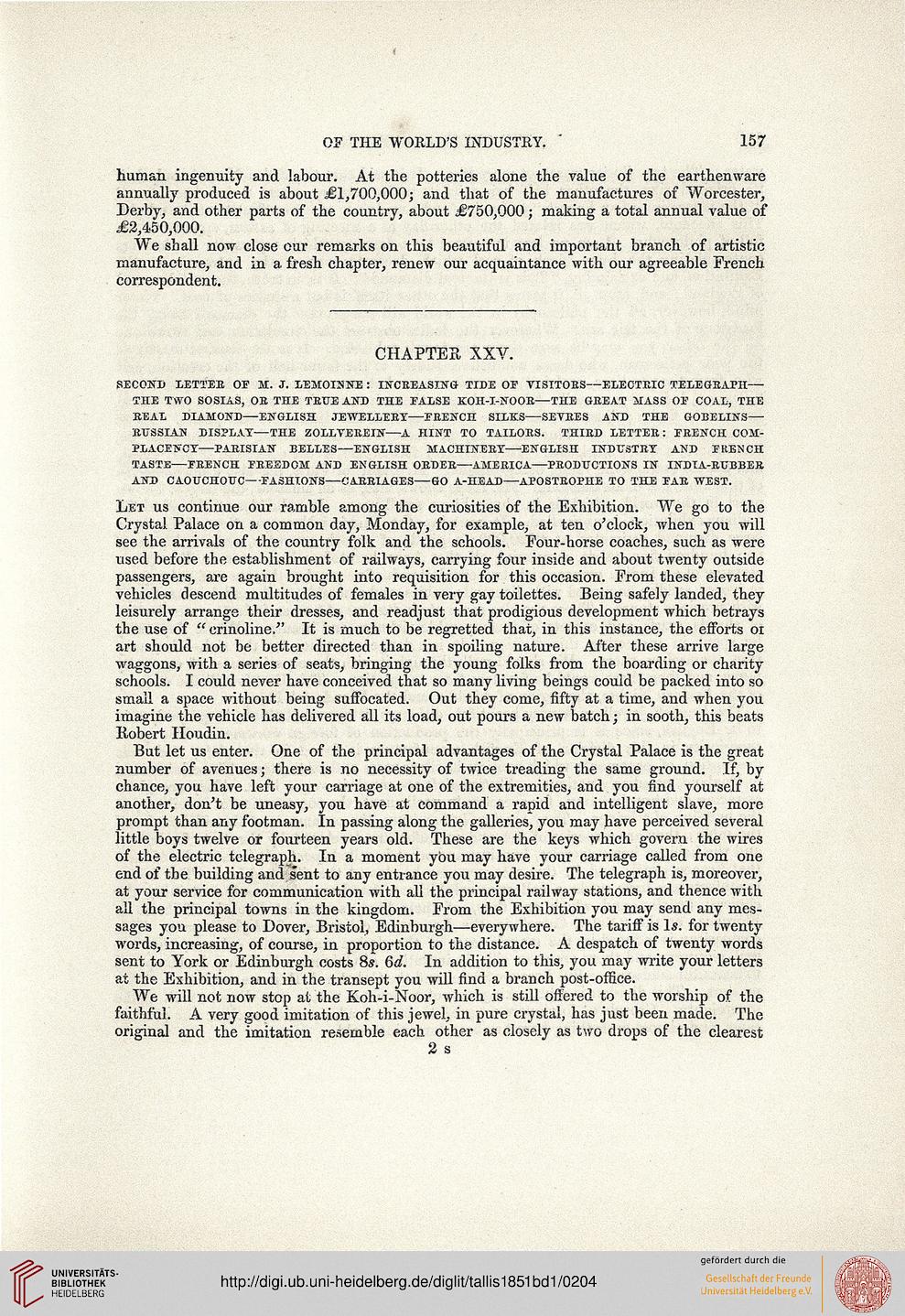 Information about OCR text
OF THE "WORLD'S INDUSTRY. ' 157

human ingenuity and labour. At the potteries alone the value of the earthenware
annually produced is about .£1,700,000; and that of the manufactures of Worcester,
Derby, and other parts of the country, about £750,000; making a total annual value of
£2,450,000.

We shall now close our remarks on this beautiful and important branch of artistic
manufacture, and in a, fresh chapter, renew our acquaintance with our agreeable French
correspondent.

Let us continue our ramble among the curiosities of the Exhibition. We go to the
Crystal Palace on a common day, Monday, for example, at ten o'clock, when you will
see the arrivals of the country folk and the schools. Four-horse coaches, such as were
used before the establishment of railways, carrying four inside and about twenty outside
passengers, are again brought into requisition for this occasion. From these elevated
vehicles descend multitudes of females in very gay toilettes. Being safely landed, they
leisurely arrange their dresses, and readjust that prodigious development which betrays
the use of " crinoline/' It is much to be regretted that, in this instance, the efforts 01
art should not be better directed than in spoiling nature. After these arrive large
waggons, with a series of seats, bringing the young folks from the boarding or charity
schools. I could never have conceived that so many living beings could be packed into so
small a space without being suffocated. Out they come, fifty at a time, and when you
imagine the vehicle has delivered all its load, out pours a new batch; in sooth, this beats
Robert Houdin.

But let us enter. One of the principal advantages of the Crystal Palace is the great
number of avenues; there is no necessity of twice treading the same ground. If, by
chance, you have left your carriage at one of the extremities, and you find yourself at
another, don't be uneasy, you have at command a rapid and intelligent slave, more
prompt than any footman. In passing along the galleries, you may have perceived several
little boys twelve or fourteen years old. These are the keys which govern the wires
of the electric telegraph. In a moment you may have your carriage called from one
end of the building and sent to any entrance you may desire. The telegraph is, moreover,
at your service for communication with all the principal railway stations, and thence with
all the principal towns in the kingdom. From the Exhibition you may send any mes-
sages you please to Dover, Bristol, Edinburgh—everywhere. The tariff is Is. for twenty
words, increasing, of course, in proportion to the distance. A despatch of twenty words
sent to York or Edinburgh costs 8$. 6d. In addition to this, you may write your letters
at the Exhibition, and in the transept you will find a branch post-office.

We will not now stop at the Koh-i-Noor, which is still offered to the worship of the
faithful. A very good imitation of this jewel, in pure crystal, has just been made. The
original and the imitation resemble each other as closely as two drops of the clearest