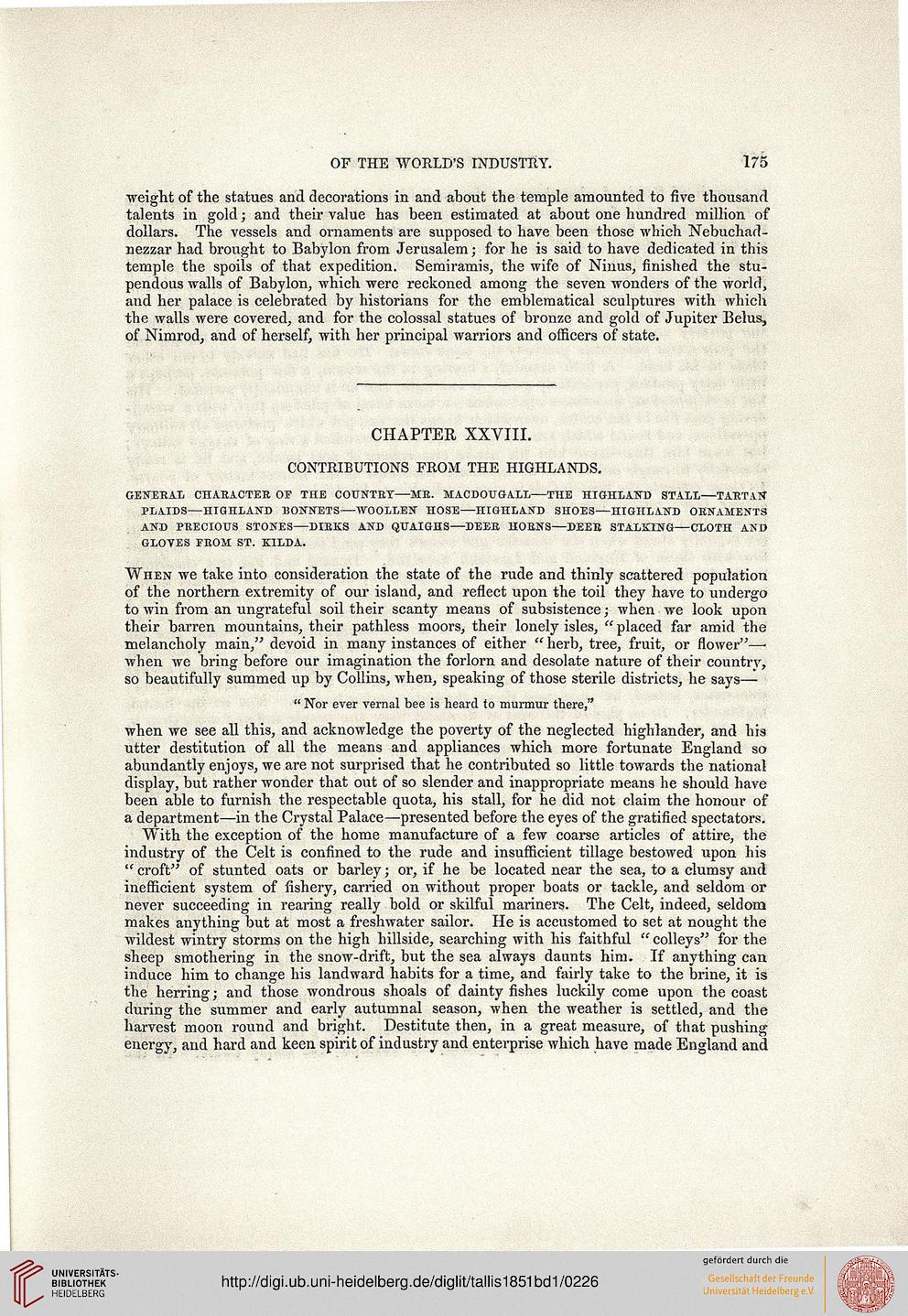 Information about OCR text
OF THE "WORLD'S INDUSTRY. 175

weight of the statues and decorations in and about the temple amounted to five thousand
talents in gold; and their value has been estimated at about one hundred million of
dollars. The vessels and ornaments are supposed to have been those which Nebuchad-
nezzar had brought to Babylon from Jerusalem; for he is said to have dedicated in this
temple the spoils of that expedition. Semiranxis, the wife of Ninus, finished the stu-
pendous walls of Babylon, which were reckoned among the seven wonders of the world,
and her palace is celebrated by historians for the emblematical sculptures with which
the walls were covered, and for the colossal statues of bronze and gold of Jupiter Belus,
of Nimrod, and of herself, with her principal warriors and officers of state.

CHAPTER XXVIII.
CONTRIBUTIONS FROM THE HIGHLANDS.

When we take into consideration the state of the rude and thinly scattered population
of the northern extremity of our island, and reflect upon the toil they have to undergo
to win from an ungrateful soil their scanty means of subsistence; when we look upon
their barren mountains, their pathless moors, their lonely isles, "placed far amid the
melancholy main," devoid in many instances of either " herb, tree, fruit, or flower"—■
when we bring before our imagination the forlorn and desolate nature of their country,
so beautifully summed up by Collins, when, speaking of those sterile districts, he says—

" Nor ever vernal bee is heard to murmur there,"

when we see all this, and acknowledge the poverty of the neglected highlander, and his
utter destitution of all the means and appliances which more fortunate England so
abundantly enjoys, we are not surprised that he contributed so little towards the national
display, but rather wonder that out of so slender and inappropriate means he should have
been able to furnish the respectable quota, his stall, for he did not claim the honour of
a department—in the Crystal Palace—presented before the eyes of the gratified spectators.
With the exception of the home manufacture of a few coarse articles of attire, the
industry of the Celt is confined to the rude and insufficient tillage bestowed upon his
"croft" of stunted oats or barley; or, if he be located near the sea, to a clumsy and
ineflicient system of fishery, carried on without proper boats or tackle, and seldom or
never succeeding in rearing really bold or skilful mariners. The Celt, indeed, seldom
makes anything but at most a freshwater sailor. He is accustomed to set at nought the
wildest wintry storms on the high hillside, searching with his faithful "colleys" for the
sheep smothering in the snow-drift, but the sea always daunts him. If anything can
induce him to change his landward habits for a time, and fairly take to the brine, it is
the herring; and those wondrous shoals of dainty fishes luckily come upon the coast
during the summer and early autumnal season, when the weather is settled, and the
harvest moon round and bright. Destitute then, in a great measure, of that pushing
energy, and hard and keen spirit of industry and enterprise which have made England and