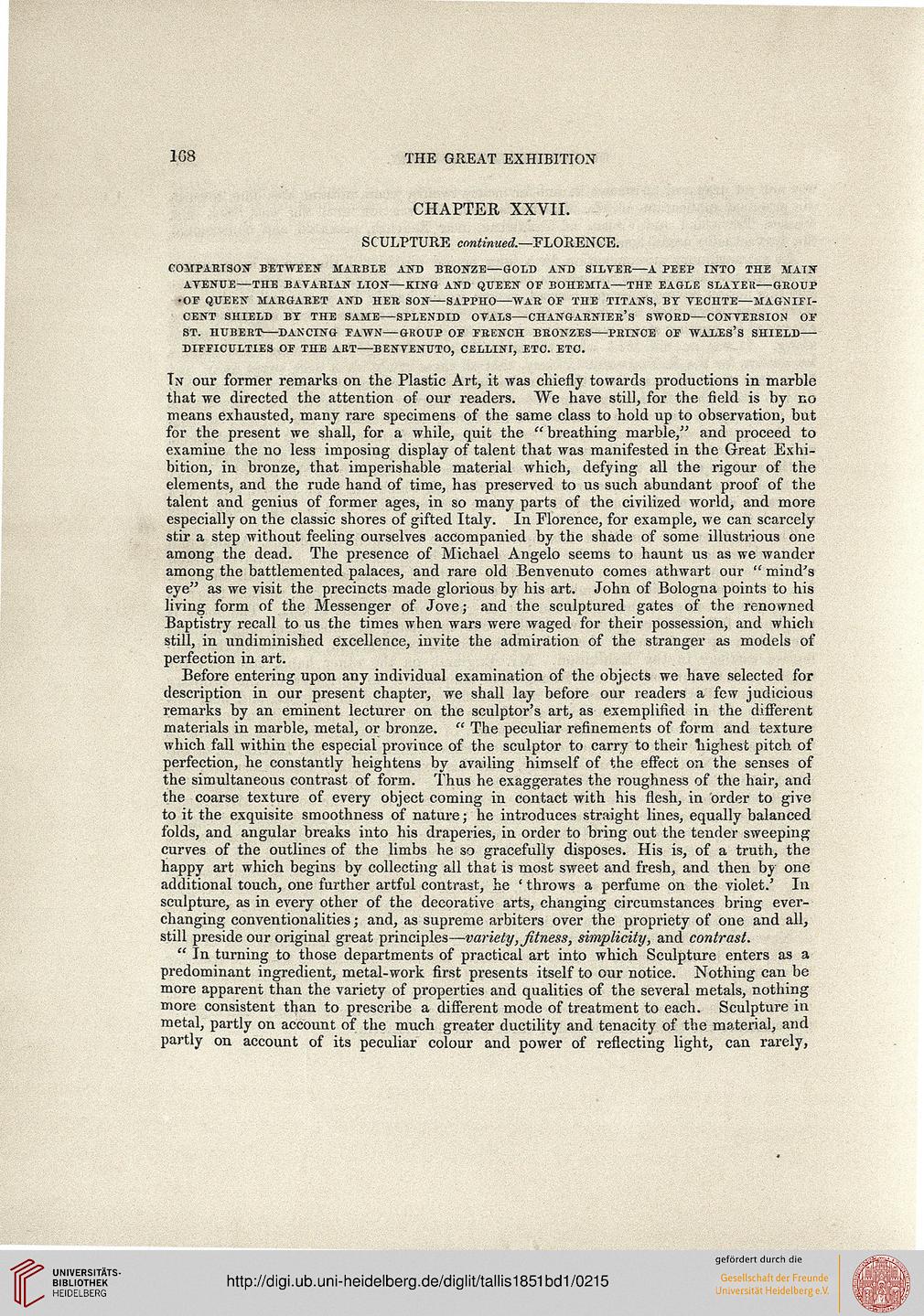 Tn our former remarks on the Plastic Art, it was chiefly towards productions in marble
that we directed the attention of our readers. We have still, for the field is by no
means exhausted, many rare specimens of the same class to hold up to observation, but
for the present we shall, for a while, quit the "breathing marble," and proceed to
examine the no less imposing display of talent that was manifested in the Great Exhi-
bition, in bronze, that imperishable material which, defying all the rigour of the
elements, and the rude hand of time, has preserved to us such abundant proof of the
talent and genius of former ages, in so many parts of the civilized world, and more
especially on the classic shores of gifted Italy. In Florence, for example, we can scarcely
stir a step without feeling ourselves accompanied by the shade of some illustrious one
among the dead. The presence of Michael Angelo seems to haunt us as we wander
among the battlemented palaces, and rare old Benvenuto comes athwart our "mind's
eye" as we visit the precincts made glorious by his art. John of Bologna points to his
living form of the Messenger of Jove; and the sculptured gates of the renowned
Baptistry recall to us the times when wars were waged for their possession, and which
still, in undiminished excellence, invite the admiration of the stranger as models of
perfection in art.

Before entering upon any individual examination of the objects we have selected for
description in our present chapter, we shall lay before our readers a few judicious
remarks by an eminent lecturer on the sculptor's art, as exemplified in the different
materials in marble, metal, or bronze. " The peculiar refinements of form and texture
which fall within the especial province of the sculptor to carry to their highest pitch of
perfection, he constantly heightens by availing himself of the effect on the senses of
the simultaneous contrast of form. Thus he exaggerates the roughness of the hair, and
the coarse texture of every object coming in contact with his flesh, in order to give
to it the exquisite smoothness of nature; he introduces straight lines, equally balanced
folds, and angular breaks into his draperies, in order to bring out the tender sweeping
curves of the outlines of the limbs he so gracefully disposes. His is, of a truth, the
happy art which begins by collecting all that is most sweet and fresh, and then by one
additional touch, one further artful contrast, he ' throws a perfume on the violet.' In
sculpture, as in every other of the decorative arts, changing circumstances bring ever-
changing conventionalities; and, as supreme arbiters over the propriety of one and all,
still preside our original great principles—variety, Jitness, simplicity, and contrast.

" In turning to those departments of practical art into which Sculpture enters as a
predominant ingredient, metal-work first presents itself to our notice. Nothing can be
more apparent than the variety of properties and qualities of the several metals, nothing
more consistent than to prescribe a different mode of treatment to each. Sculpture in
metal, partly on account of the much greater ductility and tenacity of the material, and
partly on account of its peculiar colour and power of reflecting light, can rarely,