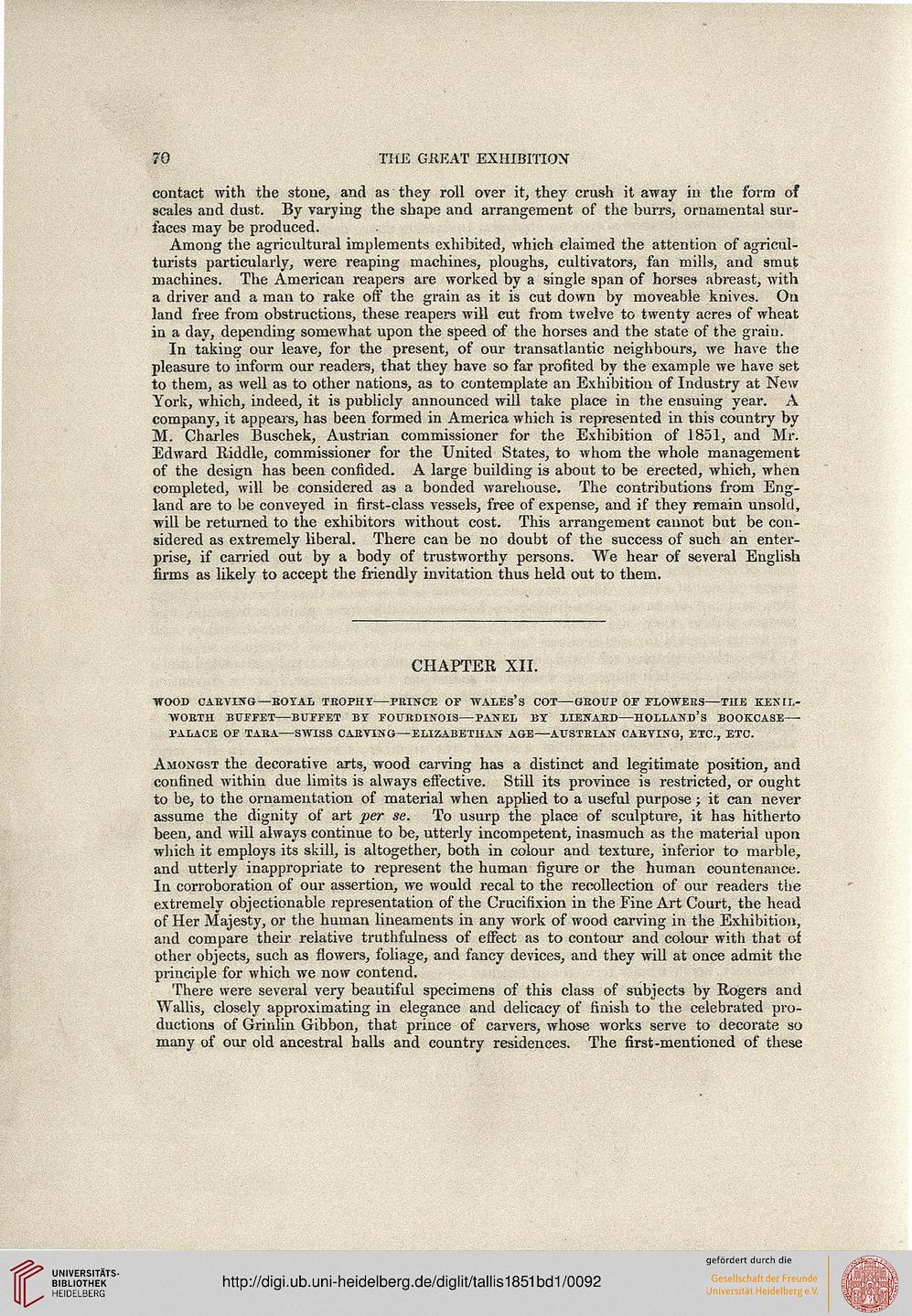 contact with the stone, and as they roll over it, they crush it away in the form of
scales and dust- By varying the shape and arrangement of the burrs, ornamental sur-
faces may be produced.

Among the agricultural implements exhibited, which claimed the attention of agricul-
turists particularly, were reaping machines, ploughs, cultivators, fan mills, and smut
machines. The American reapers are worked by a single span of horses abreast, with
a driver and a man to rake off the grain as it is cut down by moveable knives. On
land free from obstructions, these reapers will cut from twelve to twenty acres of wheat
in a day, depending somewhat upon the speed of the horses and the state of the grain.

In taking our leave, for the present, of our transatlantic neighbours, we have the
pleasure to inform our readers, that they have so far profited by the example we have set
to them, as well as to other nations, as to contemplate an Exhibition of Industry at New
York, which, indeed, it is publicly announced will take place in the ensuing year. A
company, it appeals, has been formed in America which is represented in this country by
M. Charles Buschek, Austrian commissioner for the Exhibition of 1851, and Mr.
Edward Riddle, commissioner for the United States, to whom the whole management
of the design has been confided. A large building is about to be erected, which, when
completed, will be considered as a bonded warehouse. The contributions from Eng-
land are to be conveyed in first-class vessels, free of expense, and if they remain unsold,
will be returned to the exhibitors without cost. This arrangement cannot but be con-
sidered as extremely liberal. There can be no doubt of the success of such an enter-
prise, if carried out by a body of trustworthy persons. We hear of several English
firms as likely to accept the friendly invitation thus held out to them.

Amongst the decorative arts, wood carving has a distinct and legitimate position, and
confined within due limits is always effective. Still its province is restricted, or ought
to be, to the ornamentation of material when applied to a useful purpose ; it can never
assume the dignity of art per se. To usurp the place of sculpture, it has hitherto
been, and will always continue to be, utterly incompetent, inasmuch as the material upon
which it employs its skill, is altogether, both in colour and texture, inferior to marble,
and utterly inappropriate to represent the human figure or the human countenance.
In corroboration of our assertion, we would recal to the recollection of our readers the
extremely objectionable representation of the Crucifixion in the Fine Art Court, the head
of Her Majesty, or the human lineaments in any work of wood carving in the Exhibition,
and compare their relative truthfulness of effect as to contour and colour with that of
other objects, such as flowers, foliage, and fancy devices, and they will at once admit the
principle for which we now contend.

There were several very beautiful specimens of this class of subjects by Sogers and
Wallis, closely approximating in elegance and delicacy of finish to the celebrated pro-
ductions of Grinlin Gibbon, that prince of carvers, whose works serve to decorate so
many of our old ancestral balls and country residences. The first-mentioned of these