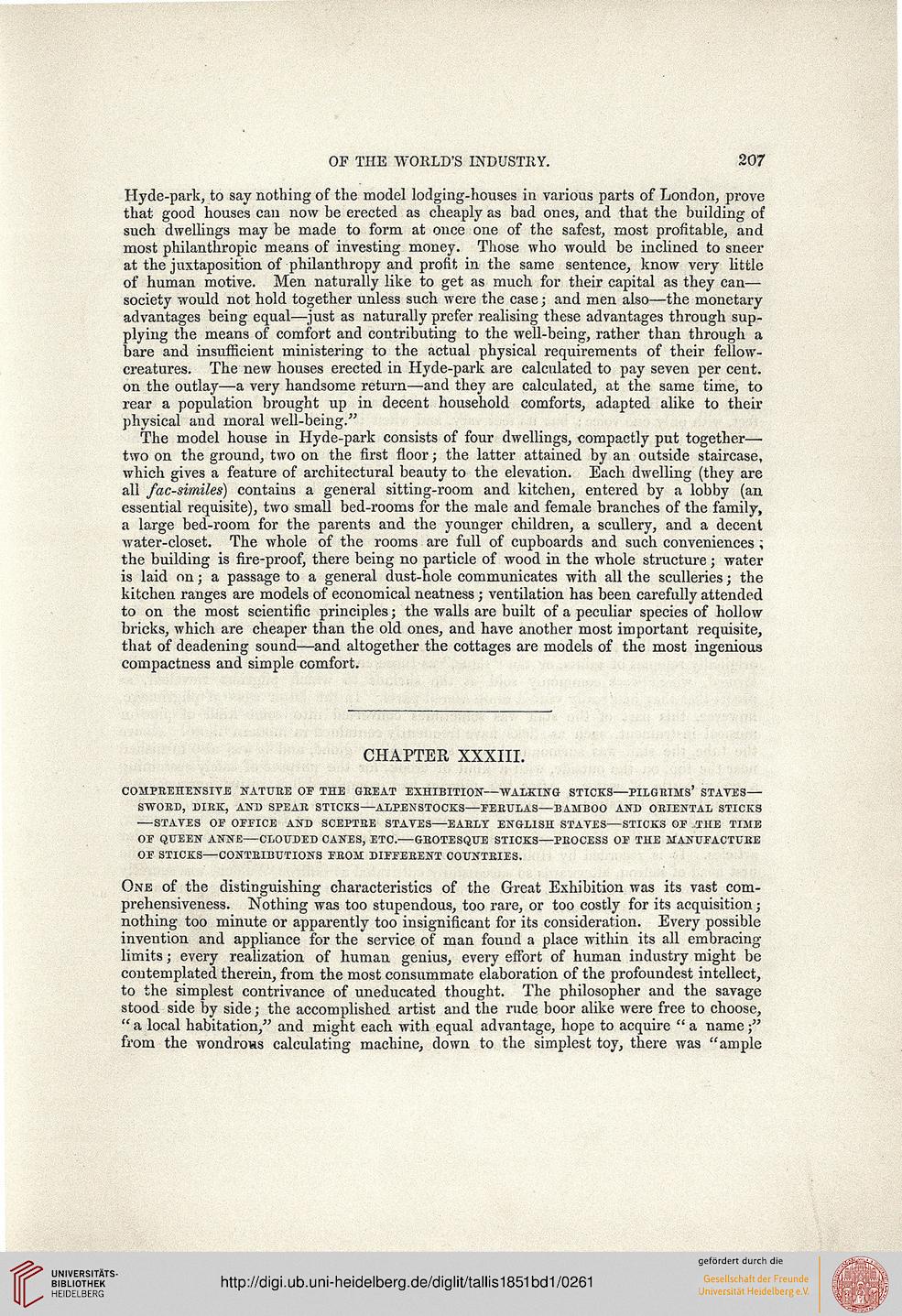 Information about OCR text
OF THE WOIiLD'S INDUSTRY. 207

Hyde-park, to say nothing of the model lodging-houses in various parts of London, prove
that good houses can now he erected as cheaply as bad ones, and that the building of
such dwellings may be made to form at once one of the safest, most profitable, and
most philanthropic means of investing money. Those who would be inclined to sneer
at the juxtaposition of philanthropy and profit in the same sentence, know very little
of human motive. Men naturally like to get as much for their capital as they can—
society would not hold together unless such were the case; and men also—the monetary
advantages being equal—just as naturally prefer realising these advantages through sup-
plying the means of comfort and contributing to the well-being, rather than through a
bare and insufficient ministering to the actual physical requirements of their fellow-
creatures. The new houses erected in Hyde-park are calculated to pay seven per cent,
on the outlay—a very handsome return—and they are calculated, at the same time, to
rear a population brought up in decent household comforts, adapted alike to their
physical and moral well-being."

The model house in Hyde-park consists of four dwellings, compactly put together—
two on the ground, two on the first floor; the latter attained by an outside staircase,
which gives a feature of architectural beauty to the elevation. Each dwelling (they are
all facsimiles) contains a general sitting-room and kitchen, entered by a lobby (an
essential requisite), two small bed-rooms for the male and female branches of the family,
a large bed-room for the parents and the younger children, a scullery, and a decent
water-closet. The whole of the rooms are full of cupboards and such conveniences;
the building is fire-proof, there being no particle of wood in the whole structure; water
is laid on; a passage to a general dust-hole communicates with all the sculleries; the
kitchen ranges are models of economical neatness; ventilation has been carefully attended
to on the most scientific principles; the walls are built of a peculiar species of hollow
bricks, which are cheaper than the old ones, and have another most important requisite,
that of deadening sound—and altogether the cottages are models of the most ingenious
compactness and simple comfort.

One of the distinguishing characteristics of the Great Exhibition was its vast com-
prehensiveness. Nothing was too stupendous, too rare, or too costly for its acquisition;
nothing too minute or apparently too insignificant for its consideration. Every possible
invention and appliance for the service of man found a place within its all embracing
limits; every realization of human genius, every effort of human industry might be
contemplated therein, from the most consummate elaboration of the profoundest intellect,
to the simplest contrivance of uneducated thought. The philosopher and the savage
stood side by side; the accomplished artist and the rude boor alike were free to choose,
"a local habitation/' and might each with equal advantage, hope to acquire " a name ;*'
from the wondroas calculating machine, down to the simplest toy, there was "ample