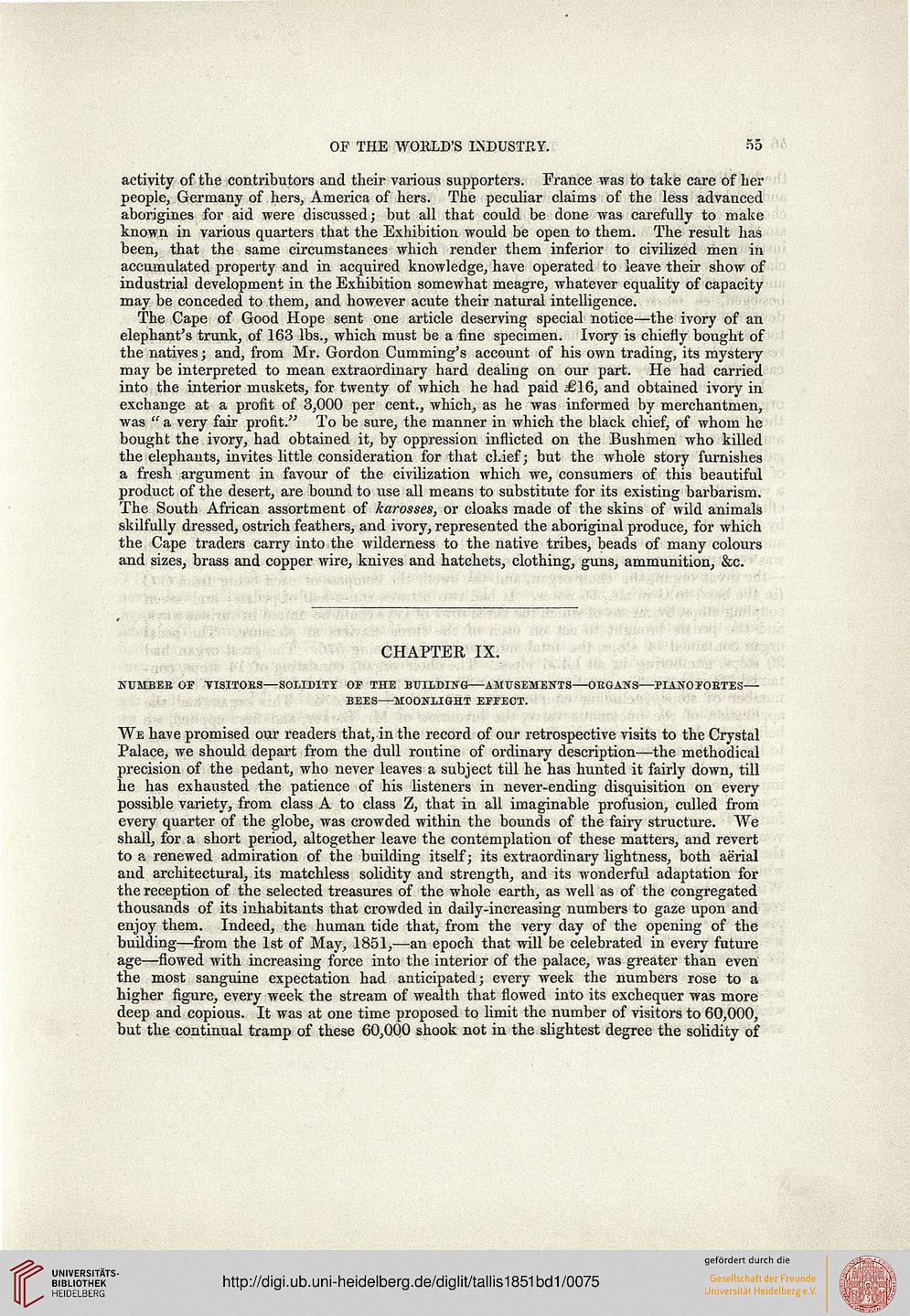 Information about OCR text
OF THE WOKLD'S INDUSTRY. 55

activity of the contributors and their various supporters. France was to take care of her
people, Germany of hers, America of hers. The peculiar claims of the less advanced
aborigines for aid were discussed; but all that could be done was carefully to make
known in various quarters that the Exhibition would be open to them. The result has
been, that the same circumstances which render them inferior to civilized men in
accumulated property and in acquired knowledge, have operated to leave their show of
industrial development in the Exhibition somewhat meagre, whatever equality of capacity
may be conceded to them, and however acute their natural intelligence.

The Cape of Good Hope sent one article deserving special notice—the ivory of an
elephant's trunk, of 163 lbs., which must be a fine specimen. Ivory is chiefly bought of
the natives; and, from Mr. Gordon Cumming's account of his own trading, its mystery
may be interpreted to mean extraordinary hard dealing on our part. He had carried
into the interior muskets, for twenty of which he had paid £\6, and obtained ivory in
exchange at a profit of 3,000 per cent., which, as he was informed by merchantmen,
was " a very fair profit." To be sure, the manner in which the black chief, of whom he
bought the ivory, had obtained it, by oppression inflicted on the Bushmen who killed
the elephants, invites little consideration for that chief; but the whole story furnishes
a fresh argument in favour of the civilization which we, consumers of this beautiful
product of the desert, are bound to use all means to substitute for its existing barbarism.
The South African assortment of karosses, or cloaks made of the skins of wild animals
skilfully dressed, ostrich feathers, and ivory, represented the aboriginal produce, for which
the Cape traders carry into the wilderness to the native tribes, beads of many colours
and sizes, brass and copper wire, knives and hatchets, clothing, guns, ammunition, &c.

We have promised our readers that, in the record of our retrospective visits to the Crystal
Palace, we should depart from the dull routine of ordinary description—the methodical
precision of the pedant, who never leaves a subject till he has hunted it fairly down, till
he has exhausted the patience of his listeners in never-ending disquisition on every
possible variety, from class A to class Z, that in all imaginable profusion, culled from
every quarter of the globe, was crowded within the bounds of the fairy structure. We
shall, for a short period; altogether leave the contemplation of these matters, and revert
to a renewed admiration of the building itself; its extraordinary lightness, both aerial
and architectural, its matchless solidity and strength, and its wonderful adaptation for
the reception of the selected treasures of the whole earth, as well as of the congregated
thousands of its inhabitants that crowded in daily-increasing numbers to gaze upon and
enjoy them. Indeed, the human tide that, from the very day of the opening of the
building—from the 1st of May, 1851,—an epoch that will be celebrated in every future
age—flowed with increasing force into the interior of the palace, was greater than even
the most sanguine expectation had anticipated; every week the numbers rose to a
higher figure, every week the stream of wealth that flowed into its exchequer was more
deep and copious. It was at one time proposed to limit the number of visitors to 60,000,
but the continual tramp of these 60,000 shook not in the slightest degree the solidity of