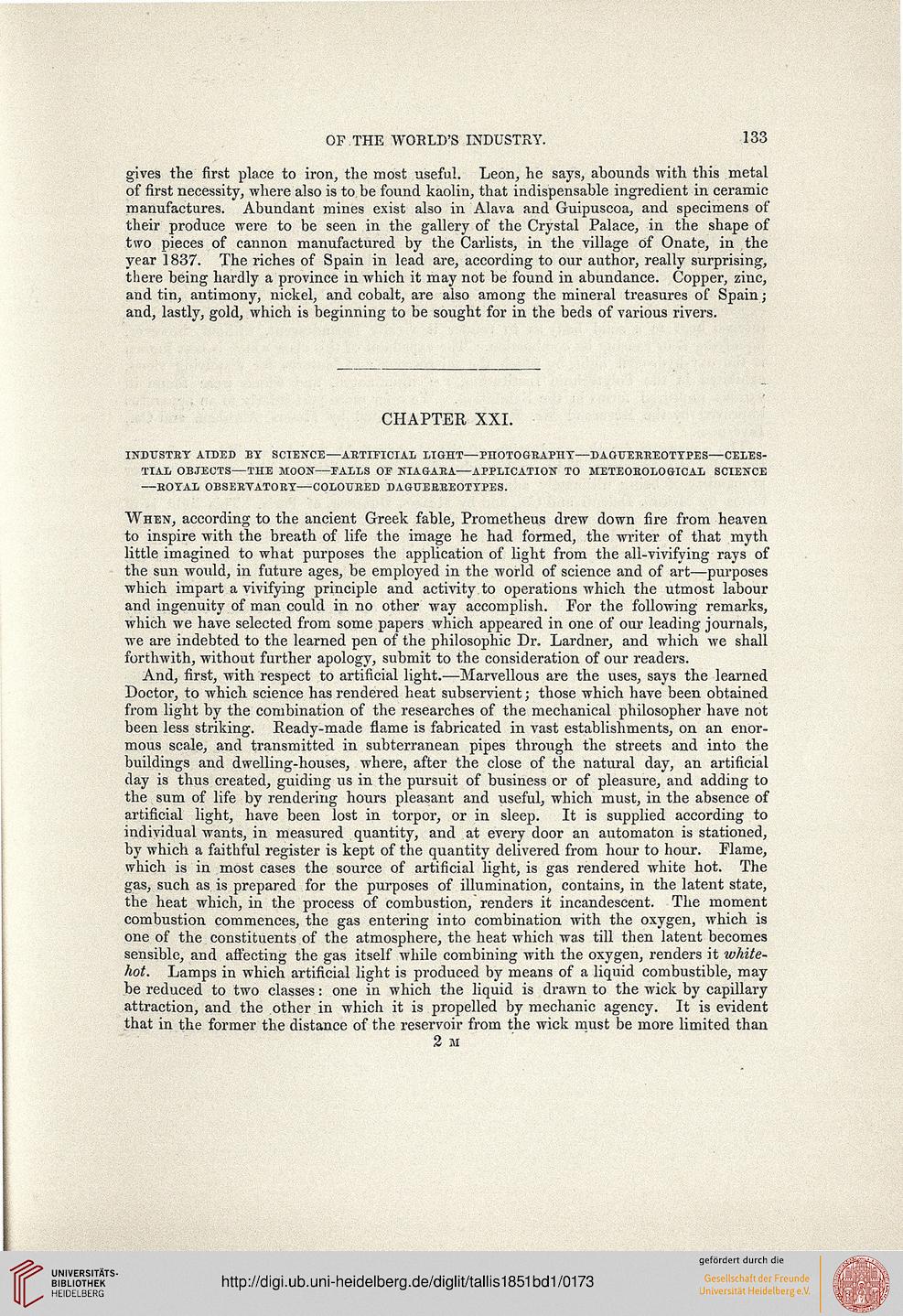 gives the first place to iron, the most useful. Leon, he says, abounds with this metal
of first necessity, where also is to be found kaolin, that indispensable ingredient in ceramic
manufactures. Abundant mines exist also in Alava and Guipuscoa, and specimens of
their produce were to be seen in the gallery of the Crystal Palace, in the shape of
two pieces of cannon manufactured by the Carlists, in the village of Onate, in the
year 1837. The riches of Spain in lead are, according to our author, really surprising,
there being hardly a province in which it may not be found in abundance. Copper, zinc,
and tin, antimony, nickel, and cobalt, are also among the mineral treasures of Spain;
and, lastly, gold, which is beginning to be sought for in the beds of various rivers.

"When, according to the ancient Greek fable, Prometheus drew down fire from heaven
to inspire with the breath of life the image he had formed, the writer of that myth
little imagined to what purposes the application of light from the all-vivifying rays of
the sun would, in future ages, be employed in the world of science and of art—purposes
which impart a vivifying principle and activity.to operations which the utmost labour
and ingenuity of man could in no other way accomplish. Por the following remarks,
which we have selected from some papers which appeared in one of our leading journals,
we are indebted to the learned pen of the philosophic Dr. Lardner, and which we shall
forthwith, without further apology, submit to the consideration of our readers.

And, first, with respect to artificial light.—Marvellous are the uses, says the learned
Doctor, to which science has rendered heat subservient; those which have been obtained
from light by the combination of the researches of the mechanical philosopher have not
been less striking. Ready-made flame is fabricated in vast establishments, on an enor-
mous scale, and transmitted in subterranean pipes through the streets and into the
buildings and dwelling-houses, where, after the close of the natural day, an artificial
day is thus created, guiding us in the pursuit of business or of pleasure, and adding to
the sum of life by rendering hours pleasant and useful, which must, in the absence of
artificial light, have been lost in torpor, or in sleep. It is supplied according to
individual wants, in measured quantity, and at every door an automaton is stationed,
by which a faithful register is kept of the quantity delivered from hour to hour. Flame,
which is in most cases the source of artificial light, is gas rendered white hot. The
gas, such as is prepared for the purposes of illumination, contains, in the latent state,
the heat which, in the process of combustion, renders it incandescent. The moment
combustion commences, the gas entering into combination with the oxygen, which is
one of the constituents.of the atmosphere, the heat which was till then latent becomes
sensible, and affecting the gas itself while combining with the oxygen, renders it white-
hot. Lamps in which artificial light is produced by means of a liquid combustible, may
be reduced to two classes: one in which the liquid is drawn to the wick by capillary
attraction, and the other in which it is propelled by mechanic agency. It is evident
that in the former the distance of the reservoir from the wick must be more limited than