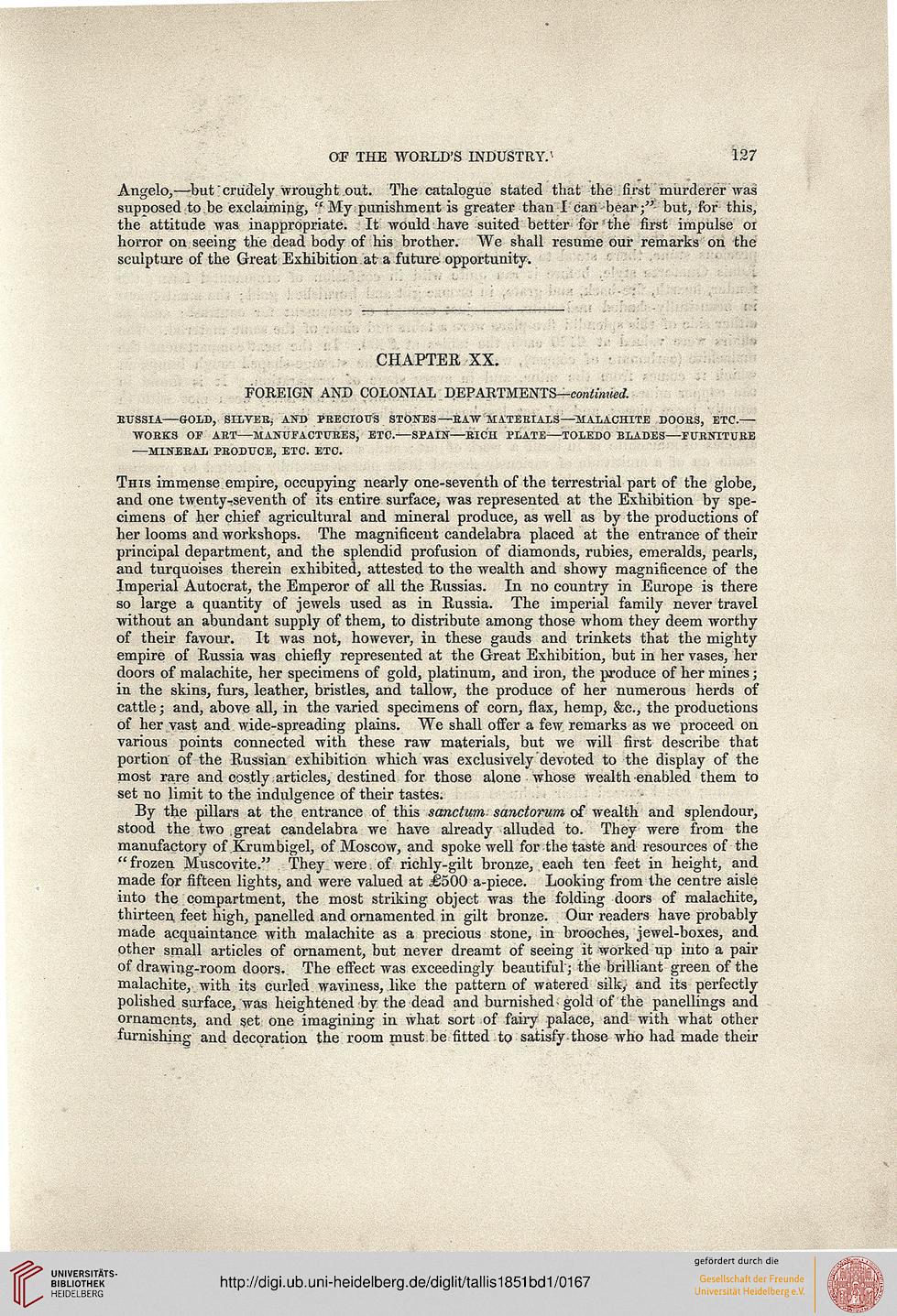 Information about OCR text
OF THE WORLD'S INDUSTRY.' 127

Angelo,—but crudely wrought.out. The catalogue stated that the first murderer was
supposed tp.be exclaiming, '? My punishment is greater than X can-bear;"- but, for this,
the attitude was inappropriate. It would: have suited better for: the first impulse 01
horror on. seeing the dead body of his brother. We shall resume our remarks on the
sculpture of the Great Exhibition at a future opportunity.

This immense, empire, occupying nearly one-seventh of the terrestrial part of the globe,
and one twenty-seventh of its entire surface, was represented at the Exhibition by spe-
cimens of her chief agricultural and mineral produce, as well as by the productions of
her looms and workshops. The magnificent candelabra placed at the entrance of their
principal department, and the splendid profusion of diamonds, rubies, emeralds, pearls,
and turquoises therein exhibited, attested to the wealth and showy magnificence of the
Imperial Autocrat, the Emperor of all the Russias. In no country in Europe is there
so large a quantity of jewels used as in Russia. The imperial family never travel
without an abundant supply of them, to distribute among those whom they deem worthy
of their favour. It was not, however, in these gauds and trinkets that the mighty
empire of Russia was chiefly represented at the Great Exhibition, but in her vases, her
doors of malachite, her specimens of gold, platinum, and iron, the produce of her mines;
in the skins, furs, leather, bristles, and tallow, the produce of her numerous herds of
cattle; and, above all, in the varied specimens of corn, flax, hemp, &c., the productions
of her vast and wide-spreading plains. "We shall offer a few; remarks as we proceed on
various points connected with these raw materials, but we will first describe that
portion' of the Russian exhibition which was exclusively'devoted to the display of the
most rare and costly articles, destined for those alone whose wealth enabled them to
set no limit to the indulgence of their tastes.

By the pillars at the entrance of this sanctum: sanctorum of wealth and splendour,
stood the two .great candelabra we have already alluded to. They were from the
manufactory of Krumbigel, of Moscow, and spoke well for the taste and resources of the
"frozen Muscovite/' They were, of richly-gilt bronze, each ten feet in height, and
made for fifteen lights, and were valued at j£500 a-piece. Looking from the centre aisle
into the compartment, the most striking object was the folding doors of malachite,
thirteen feet high, panelled and ornamented in gilt bronze. Our readers have probably
made acquaintance with malachite as a precious stone, in brooches, jewel-boxes, and
other small articles of ornament, but never dreamt of seeing it worked up into a pair
of drawing-room doors. The effect was exceedingly beautiful"; the brilliant green of the
malachite, with its curled waviness, like the pattern of watered silky and its perfectly
polished surface, was heightened by the dead and burnished • gold of the panellings and
ornaments, and set one imagining in what sort of fairy palace, and with what other
furnishing and decoration the room must be fitted to satisfythose who had made their