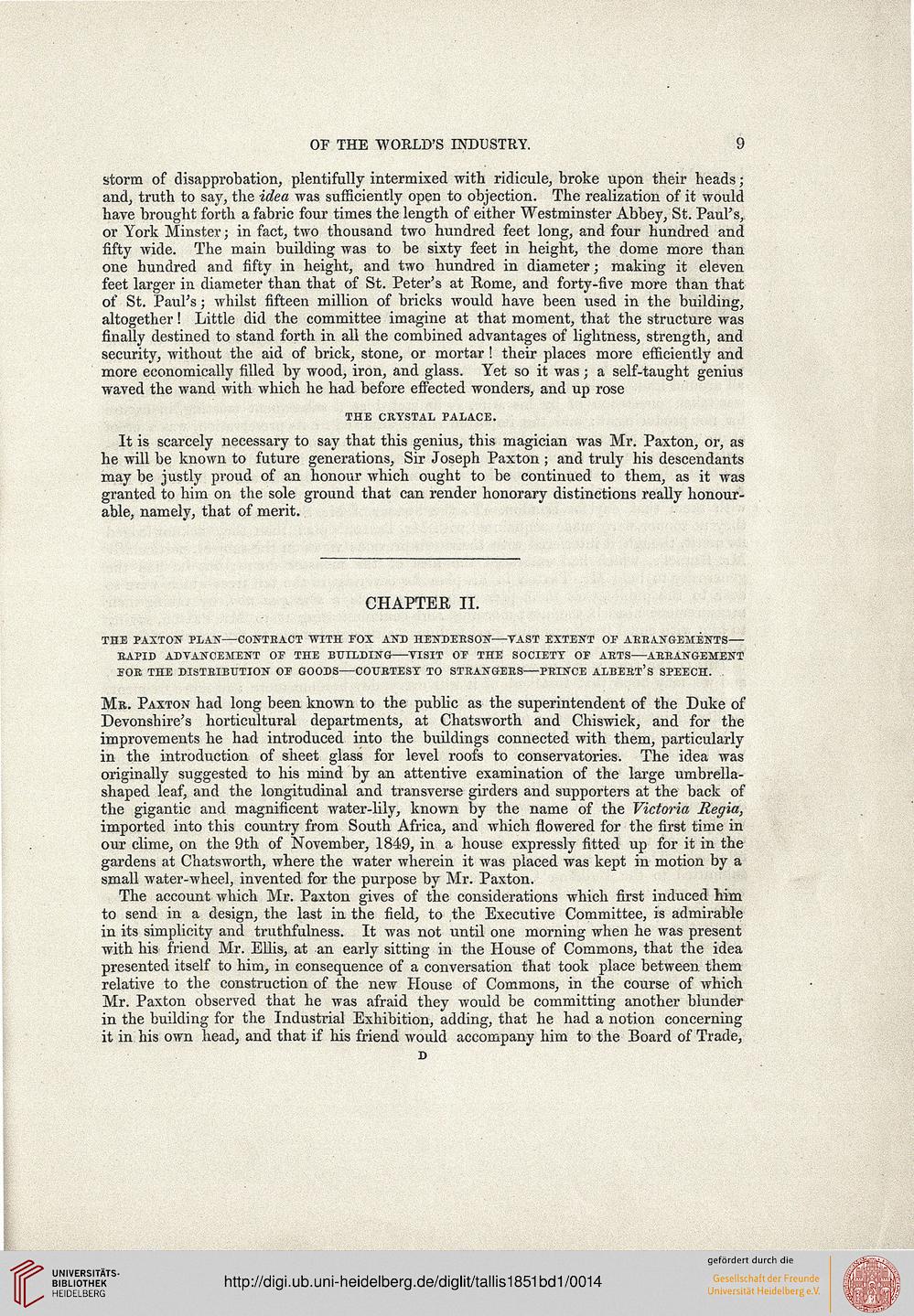 Information about OCR text
OF THE WORLD'S INDUSTRY, 9

storm of disapprobation, plentifully intermixed with ridicule, broke upon their heads;
and, truth to say, the idea was sufficiently open to objection. The realization of it would
have brought forth a fabric four times the length of either Westminster Abbey, St. Paul's,,
or York Minster; in fact, two thousand two hundred feet long, and four hundred and
fifty wide. The main building was to be sixty feet in height, the dome more than
one hundred and fifty in height, and two hundred in diameter; making it eleven
feet larger in diameter than that of St. Peter's at Rome, and forty-five more than that
of St. Paul's; whilst fifteen million, of bricks would have been used in the building,
altogether! Little did the committee imagine at that moment, that the structure was
finally destined to stand forth in all the combined advantages of lightness, strength, and
security, without the aid of brick, stone, or mortar ! their places more efficiently and
more economically filled by wood, iron, and glass. Yet so it was; a self-taught genius
waved the wand with which he had before effected wonders, and up rose

It is scarcely necessary to say that this genius, this magician was Mr. Paxton, or, as
he will be known to future generations. Sir Joseph Paxton ; and truly his descendants
may be justly proud of an honour which ought to be continued to them, as it was
granted to him on the sole ground that can render honorary distinctions really honour-
able, namely, that of merit.

Mr. Paxton had long been known to the public as the superintendent of the Duke of
Devonshire's horticultural departments, at Cliatsworth and Chiswiek, and for the
improvements he had introduced into the buildings connected with them, particularly
in the introduction of sheet glass for level roofs to conservatories. The idea was
originally suggested to his mind by an attentive examination of the large umbrella-
shaped leaf, and the longitudinal and transverse girders and supporters at the back of
the gigantic and magnificent water-lily, known by the name of the Victoria Regia,
imported into this country from South Africa, and which flowered for the first time in
our clime, on the 9th of November, 1849, in a house expressly fitted up for it in the
gardens at Chatsworth, where the water wherein it was placed was kept in motion by a
small water-wheel, invented for the purpose by Mr. Paxton.

The account which Mr. Paxton gives of the considerations which first induced him
to send in a design, the last in the field, to the Executive Committee, is admirable
in its simplicity and truthfulness. It was not until one morning when he was present
with his friend Mr. Ellis, at an early sitting in the House of Commons, that the idea
presented itself to him, in consequence of a conversation that took place between them
relative to the construction of the new House of Commons, in the course of which
Mr. Paxton observed that he was afraid they would be committing another blunder
in the building for the Industrial Exhibition, adding, that he had a notion concerning
it in his own head, and that if his friend would accompany him to the Board of Trade,