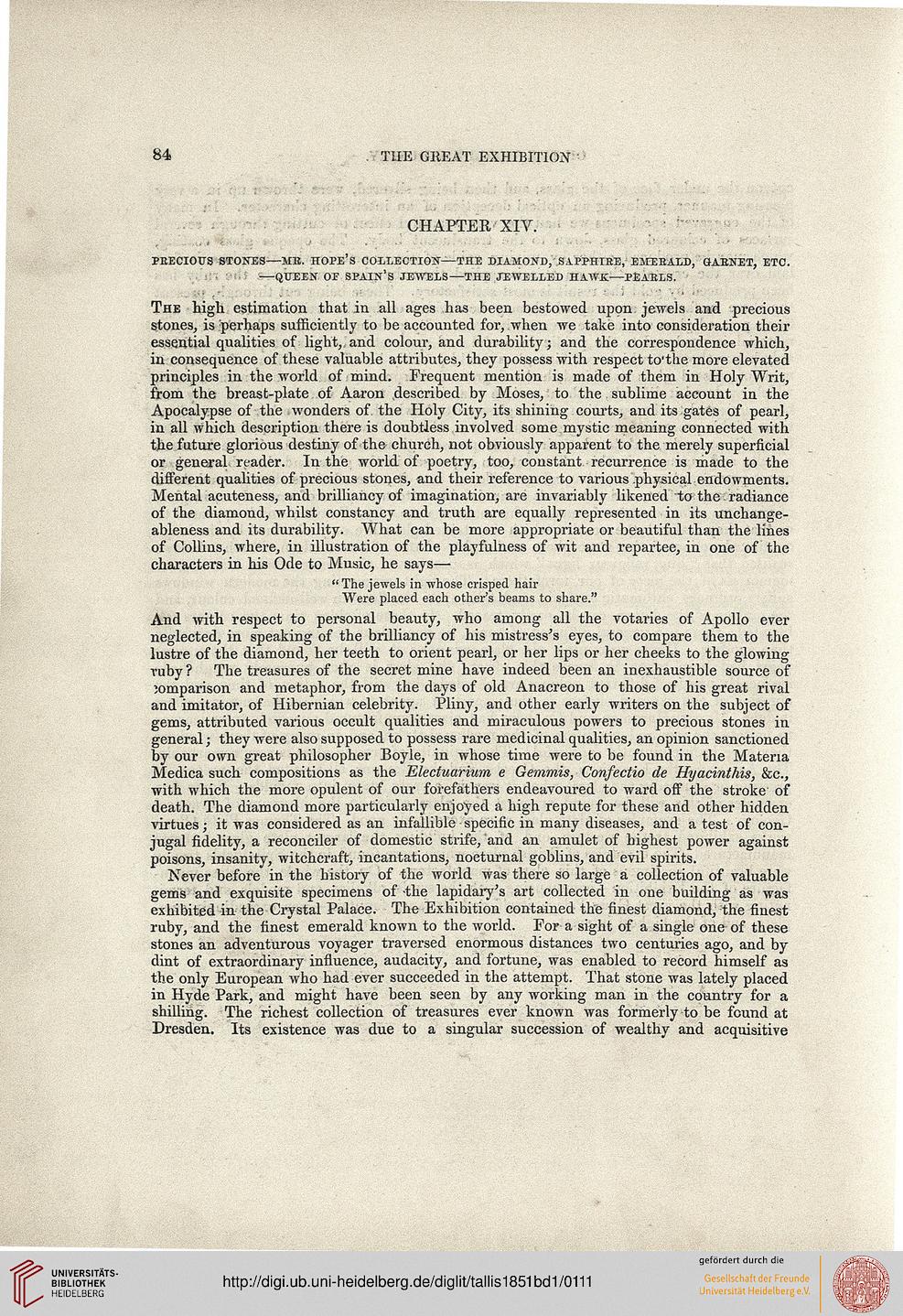 The-high estimation that in all ages has been bestowed upon: jewels and precious
stones,- is perhaps sufficiently to be accounted for, when we take into consideration their
essential qualities of light,.and colour, and durability; and the correspondence which,
in consequence of these valuable attributes, they possess with respect to* the more elevated
principles in the world of mind. Frequent mention is made of them in Holy "Writ,
from the breast-plate of Aaron .described by Moses, to the sublime account iu the
Apocalypse of the wonders of. the Holy City, its shining courts, and its gates of pearl,
in all which description there is doubtless involved some mystic meaning connected with
the future glorious destiny of the church, not obviously apparent to the merely superficial
or general reader. In the world of poetry, too, constant recurrence is made to the
different qualities of precious stones, and their reference to various physical endowments.
Mentalacuteness, and brilliancy of imagination, are invariably likened to the radiance
of the diamond, whilst constancy and truth are equally represented iu its unchange-
ableness and its durability. What can be more appropriate or beautiful than the lines
of Collins, where, in illustration of the playfulness of wit and repartee, in one of the
characters in his Ode to Music, he says—■

"The jewels in whose crisped hair
Were placed each other's beams to share."

And with respect to personal beauty, who among all the votaries of Apollo ever
neglected, in speaking of the brilliancy of his mistress's eyes, to compare them to the
lustre of the diamond, her teeth to orient pearl, or her lips or her cheeks to the glowing
ruby ? The treasures of the secret mine have indeed been an inexhaustible source of
comparison and metaphor, from the days of old Anacreon to those of his great rival
and imitator, of Hibernian celebrity. Pliny, and other early writers on the subject of
gems, attributed various occult qualities and miraculous powers to precious stones in
general; they were also supposed to possess rare medicinal qualities, an opinion sanctioned
by our own great philosopher Boyle, in whose time were to be found in the Materia
Medica such compositions as the Electuarium e Gemmis, Confectio de Hyactnthis, &c,
with which the more opulent of our forefathers endeavoured to ward off the stroke of
death. The diamond more particularly enjoyed a high repute for these and other hidden
virtues; it was considered as an infallible specific in many diseases, and a test of con-
jugal fidelity, a reconciler of domestic strife, and an amulet of highest power against
poisons, insanity, witchcraft, incantations, nocturnal goblins, and evil spirits.

Never before in the history of the world was there so large a collection of valuable
gems and exquisite specimens of -the lapidary's art collected in one building as was
exhibited in the Crystal Palace. The Exhibition contained the finest diamond, the finest
ruby, and the finest emerald known to the world. For a sight of a single one of these
stones an adventurous voyager traversed enormous distances two centuries ago, and by
dint of extraordinary influence, audacity, and fortune, was enabled to record himself as
the only European who had ever succeeded in the attempt. That stone was lately placed
in Hyde Park, and might have been seen by any working man in the country for a
shilling. The richest collection of treasures ever known was formerly to be found at
Dresden. Its existence was due to a singular succession of wealthy and acquisitive