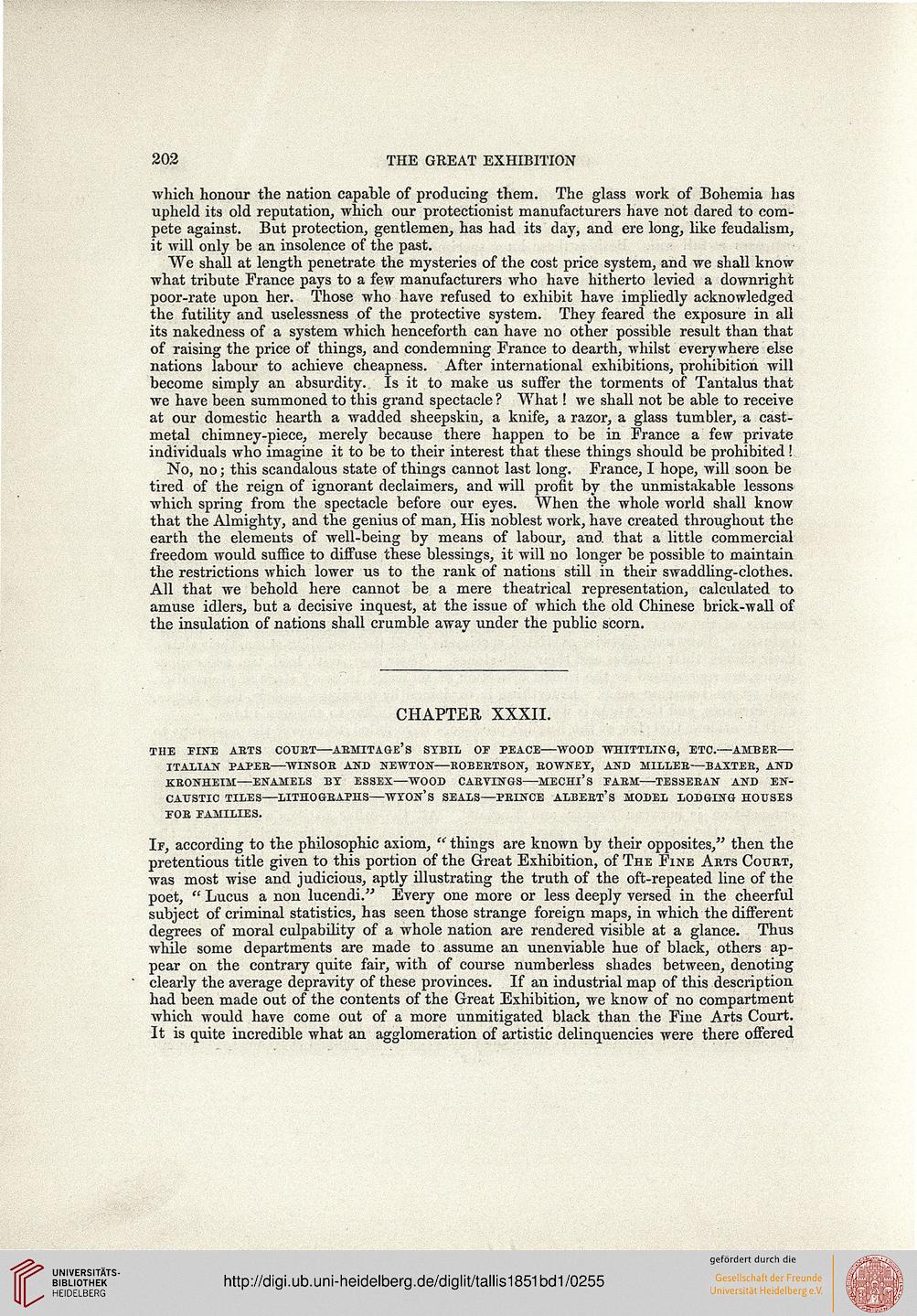 which honour the nation capable of producing them. The glass work of Bohemia lias
upheld its old reputation, which our protectionist manufacturers have not dared to com-
pete against. But protection, gentlemen, has had its day, and ere long, like feudalism,
it will only he an insolence of the past.

We shall at length penetrate the mysteries of the cost price system, and we shall know
what tribute France pays to a few manufacturers who have hitherto levied a downright
poor-rate upon her. Those who have refused to exhibit have impliedly acknowledged
the futility and uselessness of the protective system. They feared the exposure in all
its nakedness of a system which henceforth can have no other possible result than that
of raising the price of things, and condemning Prance to dearth, whilst everywhere else
nations labour to achieve cheapness. After international exhibitions, prohibition will
become simply an absurdity. Is it to make us suffer the torments of Tantalus that
we have been summoned to this grand spectacle ? "What! we shall not be able to receive
at our domestic hearth a wadded sheepskin, a knife, a razor, a glass tumbler, a cast-
metal chimney-piece, merely because there happen to be in France a few private
individuals who imagine it to be to their interest that these things should be prohibited!

No, no; this scandalous state of things cannot last long. France, I hope, will soon be
tired of the reign of ignorant declaimers, and will profit by the unmistakable lessons
which spring from the spectacle before our eyes. When the whole world shall know
that the Almighty, and the genius of man, His noblest work, have created throughout the
earth the elements of well-being by means of labour, and that a little commercial
freedom would suffice to diffuse these blessings, it will no longer be possible to maintain
the restrictions which lower us to the rank of nations still in their swaddling-clothes.
All that we behold here cannot be a mere theatrical representation, calculated to
amuse idlers, but a decisive inquest, at the issue of which the old Chinese brick-wall of
the insulation of nations shall crumble away under the public scorn.

If, according to the philosophic axiom, "things are known by their opposites," then the
pretentious title given to this portion of the Great Exhibition, of The Fine Arts Court,
was most wise and judicious, aptly illustrating the truth of the oft-repeated line of the
poet, " Lucus a nou lucendi." Every one more or less deeply versed in the cheerful
subject of criminal statistics, has seen those strange foreign maps, in which the different
degrees of moral culpability of a whole nation are rendered visible at a glance. Thus
while some departments are made to.assume an unenviable hue of black, others ap-
pear on the contrary quite fair, with of course numberless shades between, denoting
clearly the average depravity of these provinces. If an industrial map of this description
had been made out of the contents of the Great Exhibition, we know of no compartment
which would have come out of a more unmitigated black than the Fine Arts Court.
It is quite incredible what an agglomeration of artistic delinquencies were there offered