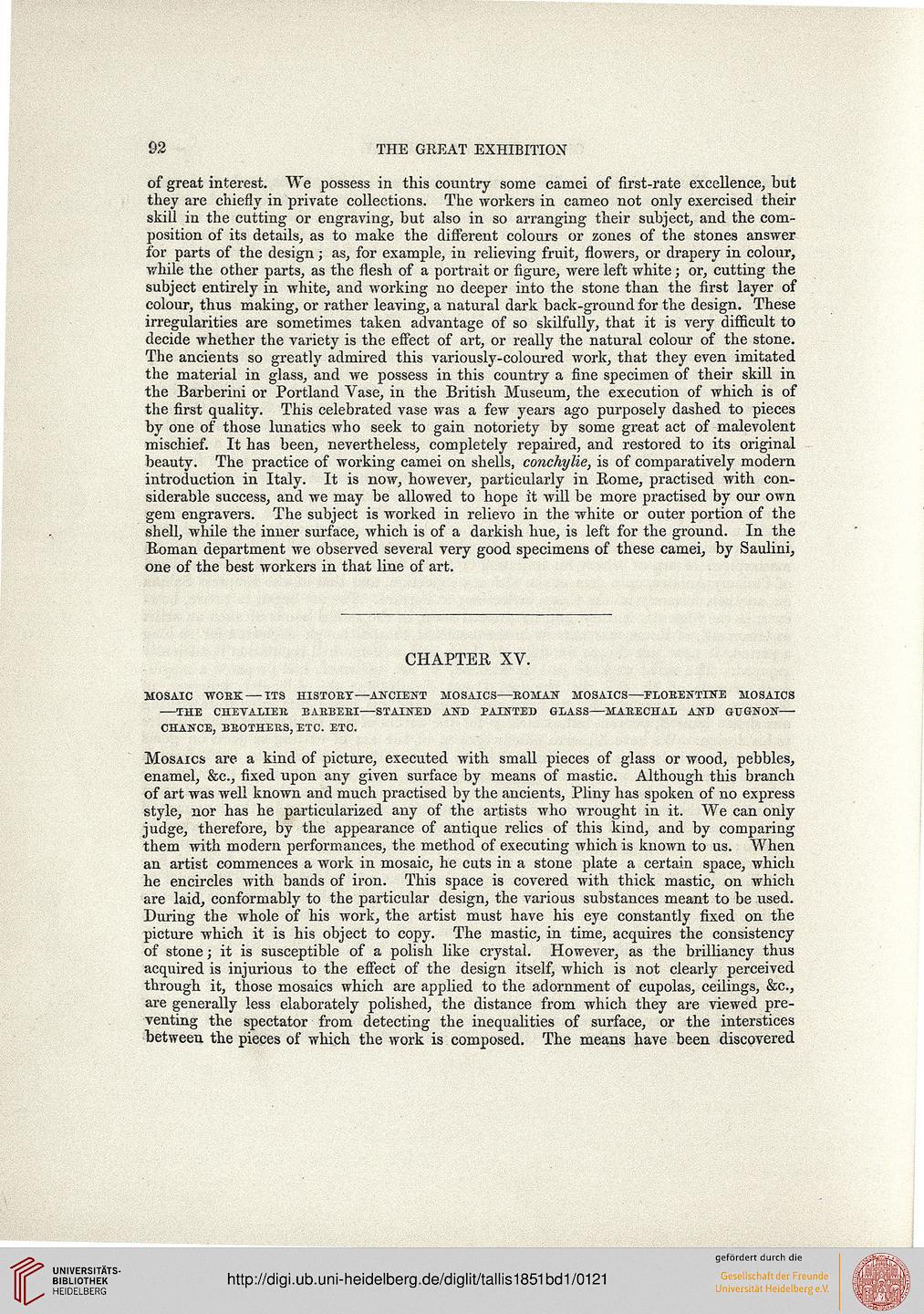 of great interest. We possess in this country some camei of first-rate excellence, but
they are chiefly in private collections. The workers in cameo not only exercised their
skill in the cutting or engraving, but also in so arranging their subject, and the com-
position of its details, as to make the different colours or zones of the stones answer
for parts of the design j as, for example, iu relieving fruit, flowers, or drapery in colour,
while the other parts, as the flesh of a portrait or figure, were left white; or, cutting the
subject entirely in white, and working no deeper into the stone than the first layer of
colour, thus making, or rather leaving, a natural dark back-ground for the design. These
irregularities are sometimes taken advantage of so skilfully, that it is very difficult to
decide whether the variety is the effect of art, or really the natural colour of the stone.
The ancients so greatly admired this variously-coloured work, that they even imitated
the material in glass, and we possess in this country a fine specimen of their skill in
the Barberini or Portland Vase, in the British Museum, the execution of which is of
the first quality. This celebrated vase was a few years ago purposely dashed to pieces
by one of those lunatics who seek to gain notoriety by some great act of malevolent
mischief. It has been, nevertheless, completely repaired, and restored to its original
beauty. The practice of working camei on shells, conchylie, is of comparatively modern
introduction in Italy. It is now, however, particularly in Borne, practised with con-
siderable success, and we may be allowed to hope it will be more practised by our own
gem engravers. The subject is worked in relievo in the white or outer portion of the
shell, while the inner surface, which is of a darkish hue, is left for the ground. In the
Roman department we observed several very good specimens of these camei, by Saulini,
one of the best workers in that line of art.

Mosaics are- a kind of picture, executed with small pieces of glass or wood, pebbles,
enamel, &c, fixed upon any given surface by means of mastic. Although this branch
of art was well known and much practised by the ancients, Pliny has spoken of no express
style, nor has he particularized any of the artists who wrought in it. "We can only
judge, therefore, by the appearance of antique relics of this kind, and by comparing
them with modern performances, the method of executing which is known to us. When
an artist commences a work in mosaic, he cuts in a stone plate a certain space, which
he encircles with bands of iron. This space is covered with thick mastic, on which
are laid, conformably to the particular design, the various substances meant to be used.
During the whole of his work, the artist must have his eye constantly fixed on the
picture which it is his object to copy. The mastic, in time, acquires the consistency
of stone; it is susceptible of a polish like crystal. However, as the brilliancy thus
acquired is injurious to the effect of the design itself, which is not clearly perceived
through it, those mosaics which are applied to the adornment of cupolas, ceilings, &c,
are generally less elaborately polished, the distance from which they are viewed pre-
venting the spectator from detecting the inequalities of surface, or the interstices
between the pieces of which the work is composed. The means have been discovered