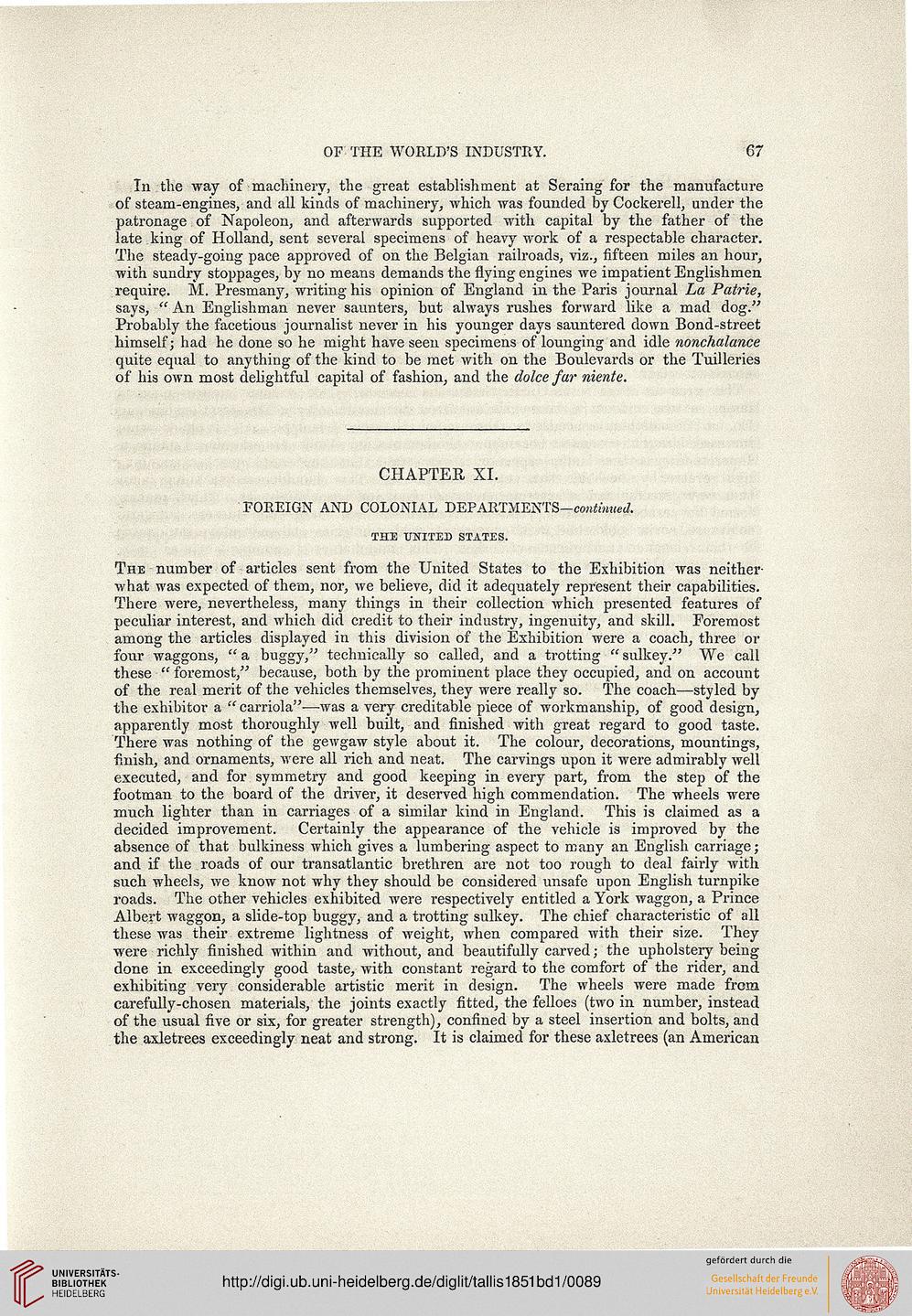 Information about OCR text
OF THE WORLD'S INDUSTRY. 6/

In the way of ■ machinery, the great establishment at Seraing for the manufacture
of steam-engines, and all kinds of machinery, which was founded by Cockerell, under the
patronage of Napoleon, and afterwards supported with capital by the father of the
late king of Holland, sent several specimens of heavy work of a respectable character.
The steady-going pace approved of on the Belgian railroads, viz., fifteen miles an hour,
with sundry stoppages, by no means demands the flying engines we impatient Englishmen
require. M. Presmany, writing his opinion of England in the Paris journal La Patrie,
says, " An Englishman never saunters, but always rushes forward like a mad dog."
Probably the facetious journalist never in his younger days sauntered down Bond-street
himself; had he done so he might have seen specimens of lounging and idle nonchalance
quite equal to anything of the kind to be met with on the Boulevards or the Tuilleries
of his own most delightful capital of fashion, and the dolce far niente.

The number of articles sent from the United States to the Exhibition was neither-
what was expected of them, nor, we believe, did it adequately represent their capabilities.
There were, nevertheless, many things in their collection which presented features of
peculiar interest, and which did credit to their industry, ingenuity, and skill. Foremost
among the articles displayed in this division of the Exhibition were a coach, three or
four waggons, " a buggy," technically so called, and a trotting " sulkey." We call
these "foremost," because, both by the prominent place they occupied, and on account
of the real merit of the vehicles themselves, they were really so. The coach—styled by
the exhibitor a "carriola"—was a very creditable piece of workmanship, of good design,
apparently most thoroughly well built, and finished with great regard to good taste.
There was nothing of the gewgaw style about it. The colour, decorations, mountings,
finish, and ornaments, were all rich and neat. The carvings upon it were admirably well
executed, and for symmetry and good keeping in every part, from the step of the
footman to the board of the driver, it deserved high commendation. The wheels were
much lighter than in carriages of a similar kind in England. This is claimed as a
decided improvement. Certainly the appearance of the vehicle is improved by the
absence of that bulkiness which gives a lumbering aspect to many an English carriage;
and if the roads of our transatlantic brethren are not too rough to deal fairly with
such wheels, we know not why they should be considered unsafe upon English turnpike
roads. The other vehicles exhibited were respectively entitled a York waggon, a Prince
Albert waggon, a slide-top buggy, and a trotting sulkey. The chief characteristic of all
these was their extreme lightness of weight, when compared with their size. They
were richly finished within and without, and beautifully carved; the upholstery being
done in exceedingly good taste, with constant regard to the comfort of the rider, and
exhibiting very considerable artistic merit in design. The wheels were made from
carefully-chosen materials, the joints exactly fitted, the felloes (two in number, instead
of the usual five or six, for greater strength), confined by a steel insertion and bolts, and
the axletrees exceedingly neat and strong. It is claimed for these axletrees (an American