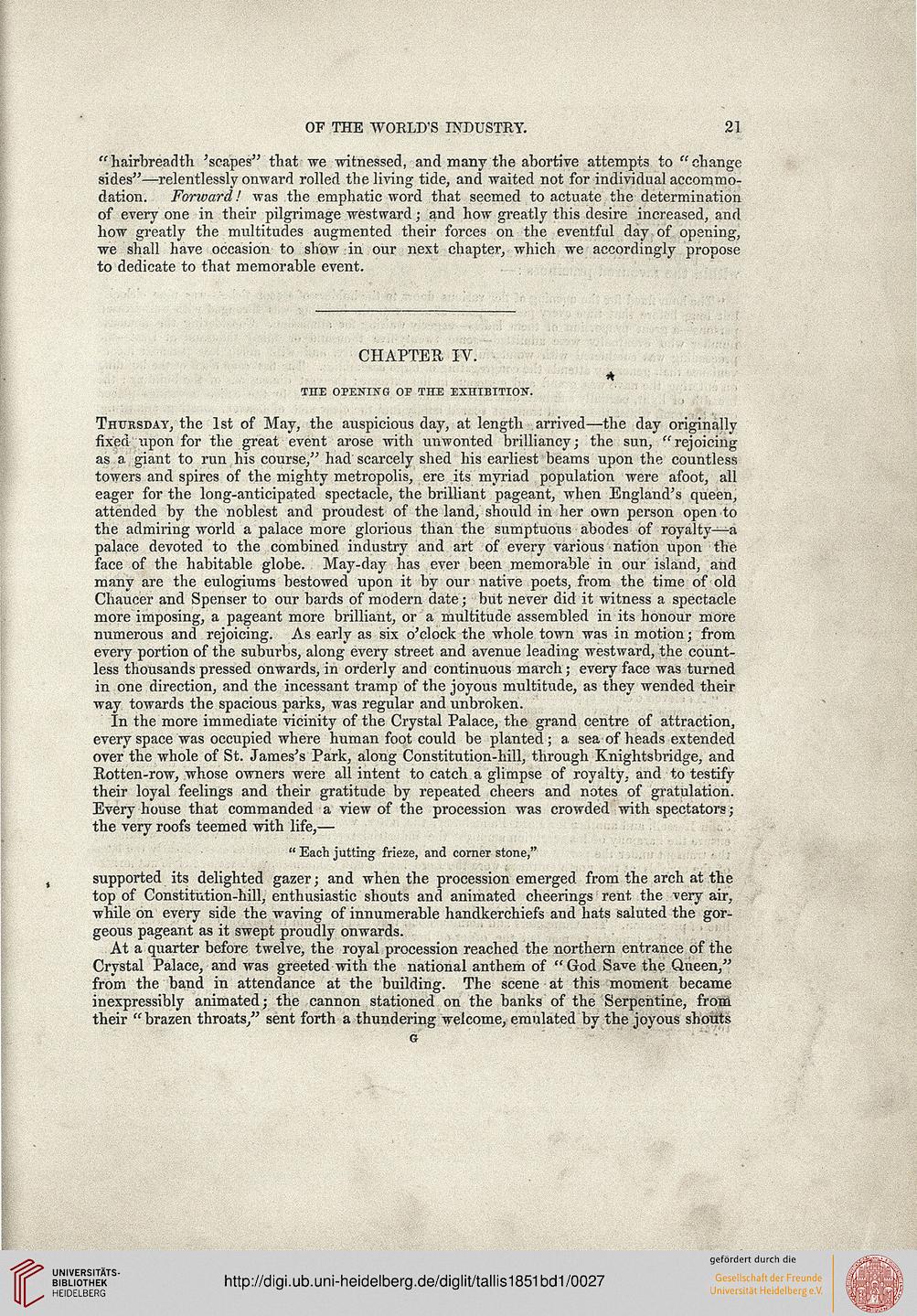 Information about OCR text
OF THE WORLD'S INDUSTRY. 21

"'hairbreadth 'scapes" that we witnessed, and many the abortive attempts to "change
sides"—relentlessly onward rolled the living tide, and waited not for individual accommo-
dation. Forward! was the emphatic word that seemed to actuate the determination
of everyone in their pilgrimage westward; and how greatly this desire increased, and
how greatly the multitudes augmented their forces on the eventful day of opening,
we shall have occasion to show in our next chapter, which we accordingly propose
to dedicate to that memorable event.

THE OEENING OP THE EXHIBITION.

Thursday, the 1st of May, the auspicious day, at length arrived—the day originally
fixed upon for the great event arose with unwonted brilliancy; the sun, "rejoicing
as a giant to run his course," had scarcely shed his earliest beams upon the countless
towers and spires of the mighty metropolis, ere its myriad population were afoot, all
eager for the long-anticipated spectacle, the brilliant pageant, when England's queen,
attended by the noblest and proudest of the land, should in her own person open to
the admiring world a palace more glorious than the sumptuous abodes of royalty-^a
palace devoted to the combined industry and art of every various nation upon the
face of the habitable globe. May-day has ever been memorable in our island, and
many are the eulogiums bestowed upon it by our native poets, from the time of old
Chaucer and Spenser to our bards of modern date; but never did it witness a spectacle
more imposing, a pageant more brilliant, or a multitude assembled in its honour more
numerous and rejoicing. As early as six o'clock the whole town was in motion; from
every portion of the suburbs, along everjr street and avenue leading westward, the count-
less thousands pressed onwards, in orderly and continuous inarch; every face was turned
in one direction, and the incessant tramp of the joyous multitude, as they wended their
way towards the spacious parks, was regular and unbroken.

In the more immediate vicinity of the Crystal Palace, the grand centre of attraction,
every space was occupied where human foot could be planted; a sea of heads extended
over the whole of St. James's Park, along Constitution-hill, through Knightsbridge, and
Kotten-row, whose owners were all intent to catch a glimpse of royalty, and to testify
their loyal feelings and their gratitude by repeated cheers and notes of gratulation.
Every house that commanded a view of the procession was crowded with spectators;
the very roofs teemed with life,—

supported its delighted gazer; an d when the procession emerged from the arch at the
top of Constitution-hill, enthusiastic shouts and animated cheerings rent the very air,
while on every side the waving of innumerable handkerchiefs and hats saluted the gor-
geous pageant as it swept proudly onwards.

At a quarter before twelve, the royal procession reached the northern entrance of the
Crystal Palace, and was greeted with the national anthem of "God Sa^e the Queen,"
from the band in attendance at the building. The scene at this moment became
inexpressibly animated; the cannon stationed on the banks of the Serpentine, froiii
their "brazen throats/' sent forth a thundering welcome; emulated by the joyous shoiits