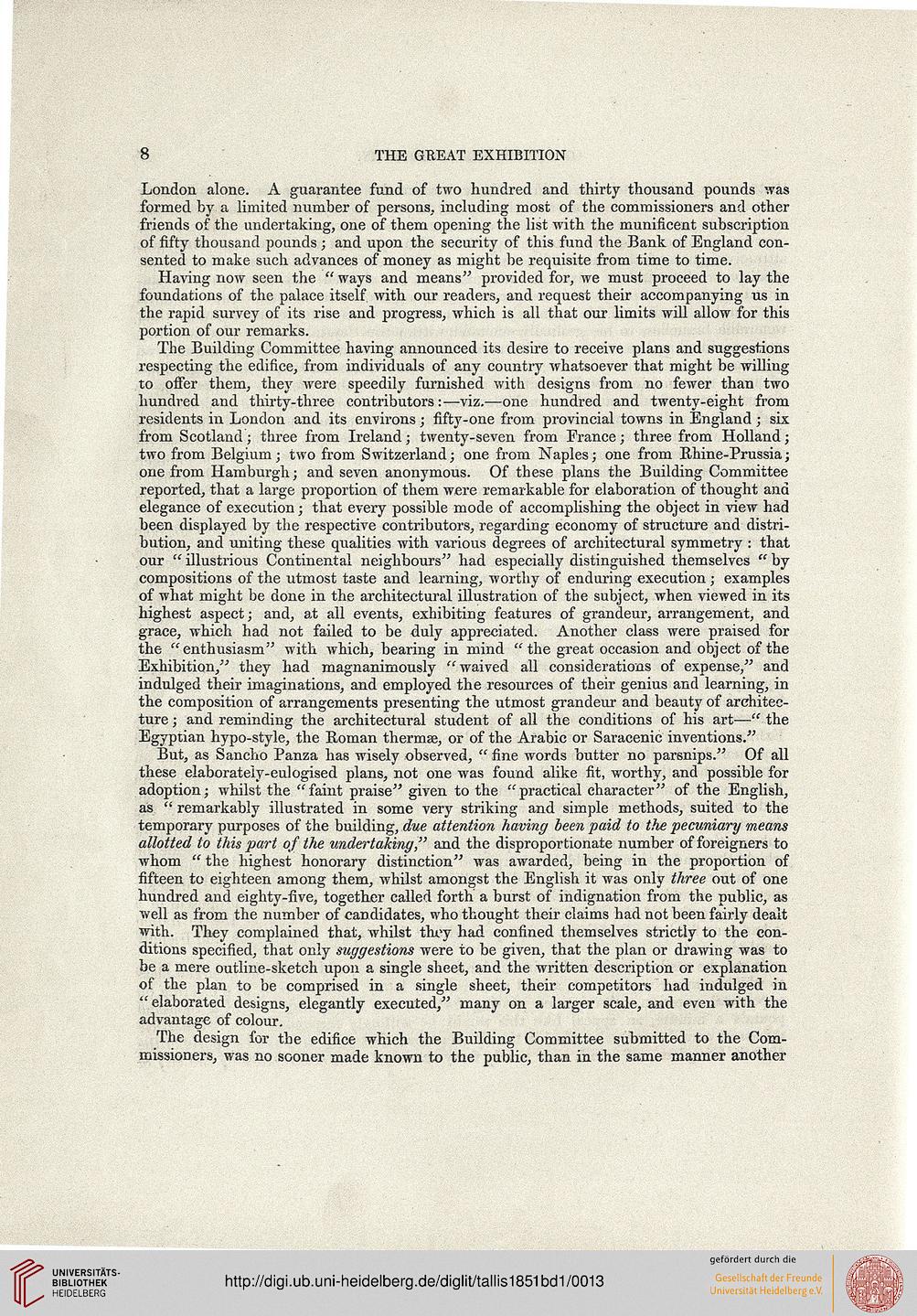 London alone. A guarantee fund of two hundred and thirty thousand pounds was
formed by a limited number of persons, including most of the commissioners and other
friends of the undertaking, one of them opening the list with the munificent subscription
of fifty thousand pounds ; and upon the security of this fund the Bank of England con-
sented to make such advances of money as might be requisite from time to time.

Having now seen the "ways and means" provided for, we must proceed to lay the
foundations of the palace itself with our readers, and request their accompanying us in
the rapid survey of its rise and progress, which is all that our limits will allow for this
portion of our remarks.

The Building Committee having announced its desire to receive plans and suggestions
respecting the edifice, from individuals of any country whatsoever that might be willing
to offer them, they were speedily furnished with designs from no fewer than two
hundred and thirty-three contributors:—viz,—one hundred and twenty-eight from
residents in London and its environs; fifty-one from provincial towns in England; six
from Scotland; three from Ireland; twenty-seven from France; three from Holland;
two from Belgium; two from Switzerland; one from Naples; one from Rhine-Prussia;
one from Hamburgh; and seven anonymous. Of these plans the Building Committee
reported, that a large proportion of them were remarkable for elaboration of thought and
elegance of execution; that every possible mode of accomplishing the object in view had
been displayed by the respective contributors, regarding economy of structure and distri-
bution, and uniting these qualities with various degrees of architectural symmetry : that
our "illustrious Continental neighbours" had especially distinguished themselves "by
compositions of the utmost taste and learning, worthy of enduring execution; examples
of what might be done in the architectural illustration of the subject, when viewed in its
highest aspect; and, at all events, exhibiting features of grandeur, arrangement, and
grace, which had not failed to be duly appreciated. Another class were praised for
the "enthusiasm" with which, bearing in mind "the great occasion and object of the
Exhibition," they had magnanimously "waived all considerations of expense/* and
indulged their imaginations, and employed the resources of their genius and learning, in
the composition of arrangements presenting the utmost grandeur and beauty of architec-
ture ; and reminding the architectural student of all the conditions of his art—" the
Egyptian hypo-style, the Roman thermae, or of the Arabic or Saracenic inventions/'

But, as Sancho Panza has wisely observed, " fine words butter no parsnips." Of all
these elaborately-eulogised plans, not one was found alike fit, worthy, and possible for
adoption; whilst the "faint praise" given to the "practical character" of the English,
as " remarkably illustrated in some very striking and simple methods, suited to the
temporary purposes of the building, due attention having been paid to the pecuniary means
allotted to this pari of the undertaking," and the disproportionate number of foreigners to
whom " the highest honorary distinction" was awarded, being in the proportion of
fifteen to eighteen among them, whilst amongst the English it was only three out of one
hundred and eighty-five, together called forth a burst of indignation from the public, as
well as from the number of candidates, who thought their claims had not been fairly dealt
with. They complained that, whilst they had confined themselves strictly to the con-
ditions specified, that only suggestions were to be given, that the plan or drawing was to
be a mere outline-sketch upon a single sheet, and the written description or explanation
of the plan to be comprised in a single sheet, their competitors had indulged in
"elaborated designs, elegantly executed," many on a larger scale, and even with the
advantage of colour.

The design for the edifice which the Building Committee submitted to the Com-
missioners, was no sooner made known to the public, than in the same manner another