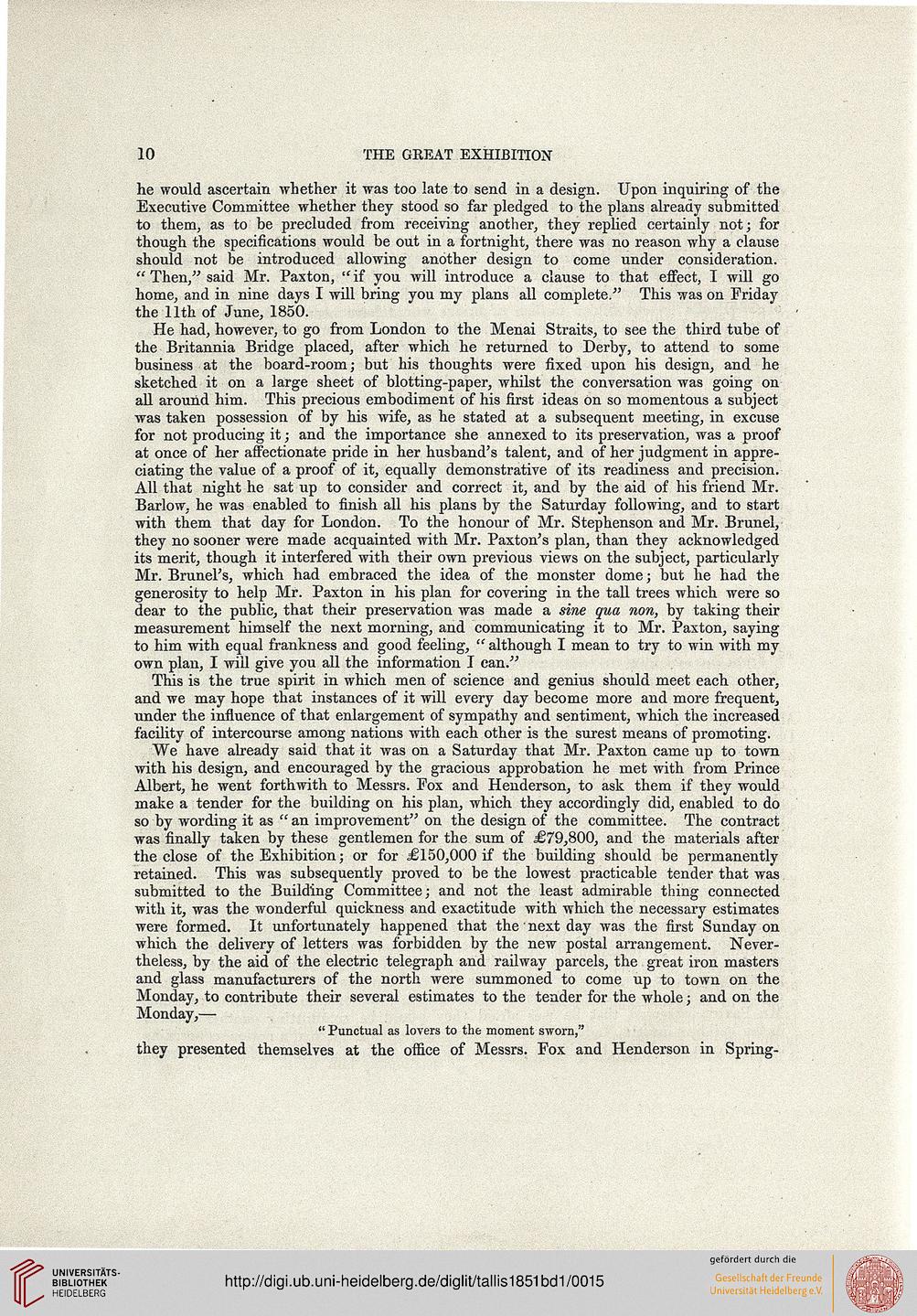 he would ascertain whether it was too late to send in a design. Upon inquiring of the
Executive Committee whether they stood so far pledged to the plans already submitted
to them, as to be precluded from receiving another, they replied certainly not; for
though the specifications would be out in a fortnight, there was no reason why a clause
should not be introduced allowing another design to come under consideration.
" Then/' said Mr. Paxton, "if you will introduce a clause to that effect, I will go
home, and in nine days I will bring you my plans all complete." This was on Friday
the 11th of June, 1850.

He had, however, to go from London to the Menai Straits, to see the third tube of
the Britannia Bridge placed, after which he returned to Derby, to attend to some
business at the board-room; but his thoughts were fixed upon his design, and he
sketched it on a large sheet of blotting-paper, "whilst the conversation was going on
all around him. This precious embodiment of his first ideas on so momentous a subject
was taken possession of by his wife, as he stated at a subsequent meeting, in excuse
for not producing it; and the importance she annexed to its preservation, was a proof
at once of her affectionate pride in her husband's talent, and of her judgment in appre-
ciating the value of a proof of it, equally demonstrative of its readiness and precision.
All that night he sat up to consider and correct it, and by the aid of his friend Mr.
Barlow, he was enabled to finish all his plans by the Saturday following, and to start
with them that day for London. To the honour of Mr. Stephenson and Mr. Brunei,
they no sooner were made acquainted with Mr. Paxton's plan, than they acknowledged
its merit, though it interfered with their own previous views on the subject, particularly
Mr. Brunei's, which had embraced the idea of the monster dome; but he had the
generosity to help Mi*. Paxton in his plan for covering in the tall trees which were so
dear to the public, that their preservation was made a sine qua non, by taking their
measurement himself the next morning, and communicating it to Mr. Paxton, saying
to him with equal frankness and good feeling, "although I mean to try to win with my
own plan, I will give you all the information I can."

This is the true spirit in which men of science and genius should meet each other,
and we may hope that instances of it will every day become more and more frequent,
under the influence of that enlargement of sympathy and sentiment, which the increased
facility of intercourse among nations with each other is the surest means of promoting.

We have already said that it was on a Saturday that Mr. Paxton came up to town
with his design, and encouraged by the gracious approbation he met with from Prince
Albert, he went forthwith to Messrs. Pox and Henderson, to ask them if they would
make a tender for the building on his plan, which they accordingly did, enabled to do
so by wording it as " an improvement" on the design of the committee. The contract
was finally taken by these gentlemen for the sum of £79,800, and the materials after
the close of the Exhibition; or for £150,000 if the building should be permanently
retained. This was subsequently proved to be the lowest practicable tender that was
submitted to the Building Committee; and not the least admirable thing connected
with it, was the wonderful quickness and exactitude with which the necessary estimates
were formed. It unfortunately happened that the * next day was the first Sunday on
which the delivery of letters was forbidden by the new postal arrangement. Never-
theless, by the aid of the electric telegraph and railway parcels, the great iron masters
and glass manufacturers of the north were summoned to come up to town on the
Monday, to contribute their several estimates to the tender for the whole; and on the
Monday,—

" Punctual as lovers to the moment sworn,"

they presented themselves at the office of Messrs. Fox and Henderson in Spring-