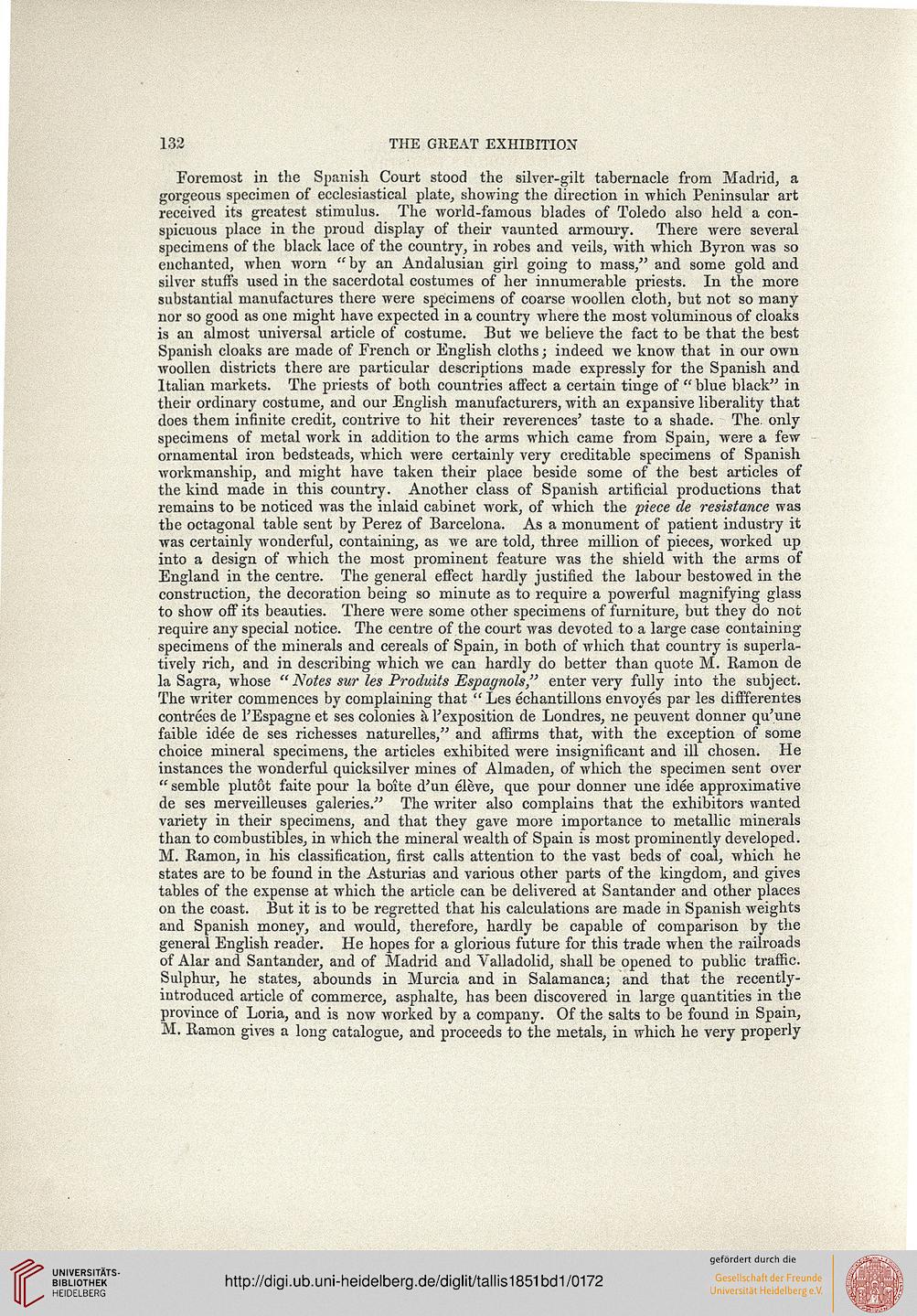 Foremost in the Spanish Court stood the silver-gilt tabernacle from Madrid, a
gorgeous specimen of ecclesiastical plate, showing the direction in which Peninsular art
received its greatest stimulus. The world-famous blades of Toledo also held a con-
spicuous place in the proud display of their vaunted armoury. There were several
specimens of the black lace of the country, in robes and veils, with which Byron was so
enchanted, when worn "by an Andalusian girl going to mass," and some gold and
silver stuffs used in the sacerdotal costumes of her innumerable priests. In the more
substantial manufactures there were specimens of coarse woollen cloth, but not so many
nor so good as one might have expected in a country where the most voluminous of cloaks
is an almost universal article of costume. But we believe the fact to be that the best
Spanish cloaks are made of French or English cloths; indeed we know that in our own
woollen districts there are particular descriptions made expressly for the Spanish and
Italian markets. The priests of both countries affect a certain tinge of "blue black" in
their ordinary costume, and our English manufacturers, with an expansive liberality that
does them infinite credit, contrive to hit their reverences' taste to a shade. The. only
specimens of metal work in addition to the ai'ms which came from Spain, were a few
ornamental iron bedsteads, which were certainly very creditable specimens of Spanish
workmanship, and might have taken their place beside some of the best articles of
the kind made in this country. Another class of Spanish artificial productions that
remains to be noticed wras the inlaid cabinet work, of which the piece de resistance was
the octagonal table sent by Perez of Barcelona. As a monument of patient industry it
was certainly wonderful, containing, as we are told, three million of pieces, worked up
into a design of which the most prominent feature was the shield with the arms of
England in the centre. The general effect hardly justified the labour bestowed in the
construction, the decoration being so minute as to require a powerful magnifying glass
to show off its beauties. There were some other specimens of furniture, but they do not
require any special notice. The centre of the court was devoted to a large case containing
specimens of the minerals and cereals of Spain, in both of which that country is superla-
tively rich, and in describing which we can hardly do better than quote M. Ramon de
la Sagra, whose " Notes sur les Produits Espagnols," enter very fully into the subject.
The writer commences by complaining that " Les echantillons envoyes par les diffferentes
contrees de TEspagne et ses colonies a l'exposition de Londres, ne peuvent donner qu'une
faible idee de ses richesses naturelles," and affirms that, with the exception of some
choice mineral specimens, the articles exhibited were insignificant and ill chosen. He
instances the wonderful quicksilver mines of Almaden, of which the specimen sent over
" semble plutot faite pour la boite d'un eleve, que pour donner une idee approximative
de ses merveilleuses galeries." The writer also complains that the exhibitors wanted
variety in their specimens, and that they gave more importance to metallic minerals
than to combustibles, in which the mineral wealth of Spain is most prominently developed.
M. Ramon, in his classification, first calls attention to the vast beds of coal, which he
states are to be found in the Asturias and various other parts of the kingdom, and gives
tables of the expense at which the article can be delivered at Santander and other places
on the coast. But it is to be regretted that his calculations are made in Spanish weights
and Spanish money, and would, therefore, hardly be capable of comparison by the
general English reader. He hopes for a glorious future for this trade when the railroads
of Alar and Santander, and of Madrid and Yalladolid, shall be opened to public traffic.
Sulphur, he states, abounds in Murcia and in Salamanca; and that the recently-
introduced article of commerce, asphalte, has been discovered in large quantities in the
province of Loria, and is now worked by a company. Of the salts to be found in Spain,
M. Ramon gives a long catalogue, and proceeds to the metals, in which he very properly