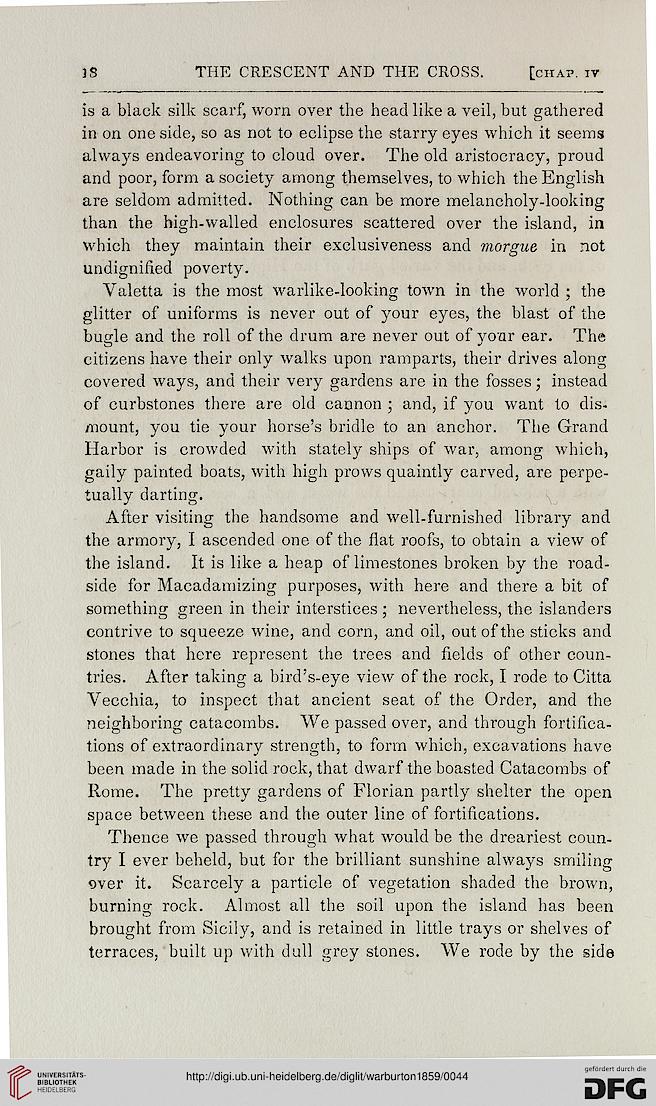 is a black silk scarf, worn over the head like a veil, but gathered
in on one side, so as not to eclipse the starry eyes which it seems
always endeavoring to cloud over. The old aristocracy, proud
and poor, form a society among themselves, to which the English
are seldom admitted. Nothing can be more melancholy-looking
than the high-walled enclosures scattered over the island, in
which they maintain their exclusiveness and morgue in not
undignified poverty.

Valetta is the most warlike-looking town in the world ; the
glitter of uniforms is never out of your eyes, the blast of the
bugle and the roll of the drum are never out of year ear. The
citizens have their only walks upon ramparts, their drives along
covered ways, and their very gardens are in the fosses; instead
of curbstones there are old cannon ; and, if you want to dis-
mount, you tie your horse's bridle to an anchor. The Grand
Harbor is crowded with stately ships of war, among which,
gaily painted boats, with high prows quaintly carved, are perpe-
tually darting.

After visiting the handsome and well-furnished library and
the armory, I ascended one of the fiat roofs, to obtain a view of
the island. It is like a heap of limestones broken by the road-
side for Macadamizing purposes, with here and there a bit of
something green in their interstices ; nevertheless, the islanders
contrive to squeeze wine, and corn, and oil, out of the sticks and
stones that here represent the trees and fields of other coun-
tries. After taking a bird's-eye view of the rock, I rode to Citta
Vecchia, to inspect that ancient seat of the Order, and the
neighboring catacombs. We passed over, and through fortifica-
tions of extraordinary strength, to form which, excavations have
been made in the solid rock, that dwarf the boasted Catacombs of
Rome. The pretty gardens of Florian partly shelter the open
space between these and the outer line of fortifications.

Thence we passed through what would be the dreariest coun-
try I ever beheld, but for the brilliant sunshine always smiling
over it. Scarcely a particle of vegetation shaded the brown,
burning rock. Almost all the soil upon the island has been
brought from Sicily, and is retained in little trays or shelves of
terraces, built up with dull grey stones. We rode by the side