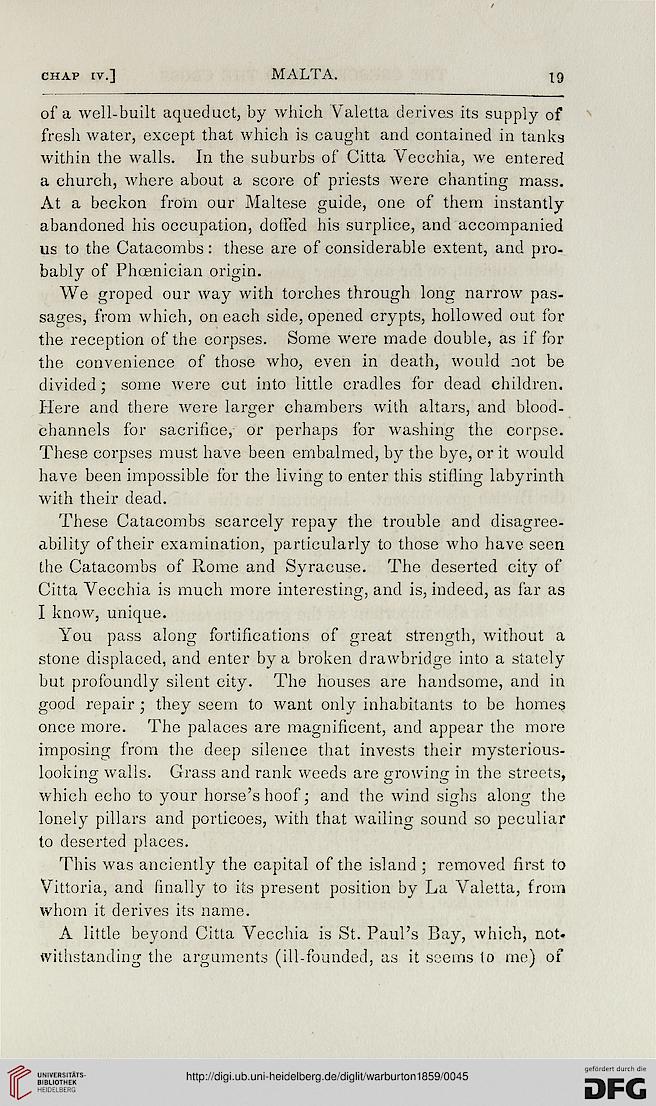 of a well-built aqueduct, by which Valetta derives its supply of
fresh water, except that which is caught and contained in tanks
within the walls. In the suburbs of Citta Vecchia, we entered
a church, where about a score of priests were chanting mass.
At a beckon from our Maltese guide, one of them instantly
abandoned his occupation, doffed his surplice, and accompanied
us to the Catacombs: these are of considerable extent, and pro-
bably of Phoenician origin.

We groped our way with torches through long narrow pas-
sages, from which, on each side, opened crypts, hollowed out for
the reception of the corpses. Some were made double, as if for
the convenience of those who, even in death, would not be
divided; some were cut into little cradles for dead children.
Here and there were larger chambers with altars, and blood-
channels for sacrifice,- or pei'haps for washing the corpse.
These corpses must have been embalmed, by the bye, or it would
have been impossible for the living to enter this stifling labyrinth
with their dead.

These Catacombs scarcely repay the trouble and disagree-
ability of their examination, particularly to those who have seen
the Catacombs of Rome and Syracuse. The deserted city of
Citta Vecchia is much more interesting, and is, indeed, as far as
I know, unique.

You pass along fortifications of great strength, without a
stone displaced, and enter by a broken drawbridge into a stately
but profoundly silent city. The houses are handsome, and in
good repair ; they seem to want only inhabitants to be homes
once more. The palaces are magnificent, and appear the more
imposing from the deep silence that invests their mysterious-
looking walls. Grass and rank weeds are growing in the streets,
which echo to your horse's hoof; and the wind sighs along the
lonely pillars and porticoes, with that wailing sound so peculiar
to deserted places.

This was anciently the capital of the island ; removed first to
Vittoria, and finally to its present position by La Valetta, from
whom it derives its name.

A little beyond Citta Vecchia is St. Paul's Bay, which, not-
withstanding the arguments (ill-founded, as it seems lo me) of