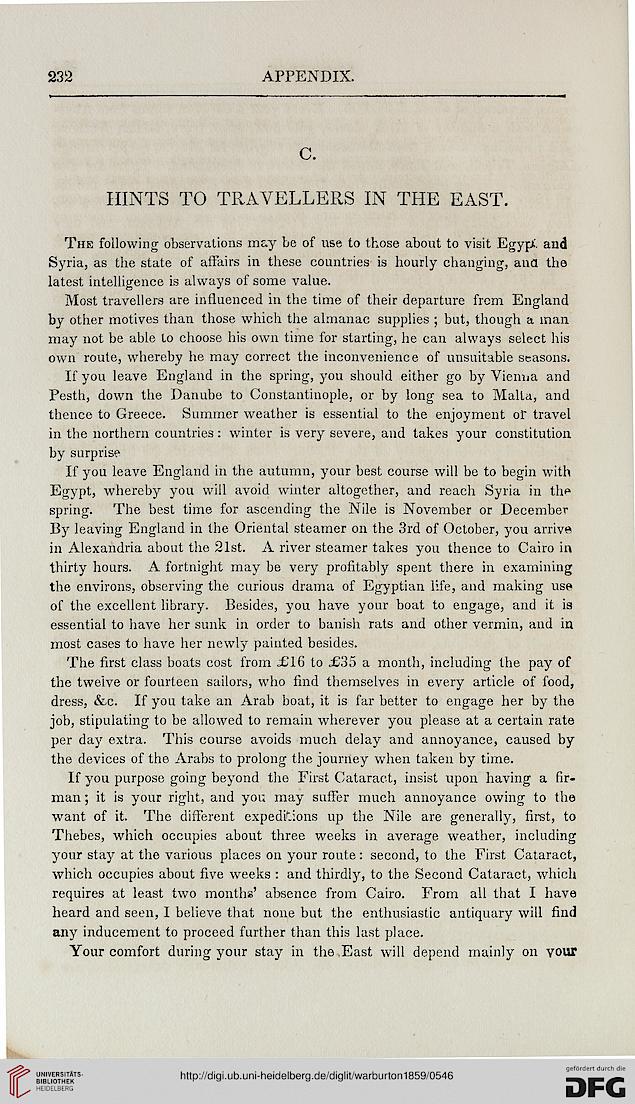 HINTS TO TRAVELLERS IN THE EAST.

The following observations may be of use to those about to visit Egypt and
Syria, as the state of affairs in these countries is hourly changing, ana the
latest intelligence is always of some value.

Most travellers are influenced in the time of their departure from England
by other motives than those which the almanac supplies ; but, though a man
may not be able to choose his own time for starting, he can always select his
own route, whereby he may correct the inconvenience of unsuitable seasons.

If you leave England in the spring, you should either go by Vieniia and
Pesth, down the Danube to Constantinople, or by long sea to Malta, and
thence to Greece. Summer weather is essential to the enjoyment of travel
in the northern countries: winter is very severe, and takes your constitution
by surprise

If you leave England in the autumn, your best course will be to begin with
Egypt, whereby you will avoid winter altogether, and reach Syria in th*>
spring. The best time for ascending the Nile is November or December
By leaving England in the Oriental steamer on the 3rd of October, you arrive
in Alexandria about the 21st. A river steamer takes you thence to Cairo in
thirty hours. A fortnight may be very profitably spent there in examining
the environs, observing the curious drama of Egyptian life, and making use
of the excellent library. Besides, you have your boat to engage, and it is
essential to have her sunk in order to banish rats and other vermin, and in
most cases to have her newly painted besides.

The first class boats cost from .£16 to £35 a month, including the pay of
the twelve or fourteen sailors, who find themselves in every article of food,
dress, &.c. If you take an Arab boat, it is far better to engage her by the
job, stipulating to be allowed to remain wherever you please at a certain rate
per day extra. This course avoids much delay and annoyance, caused by
the devices of the Arabs to prolong the journey when taken by time.

If you purpose going beyond the First Cataract, insist upon having a fir-
man ; it is your right, and you may suffer much annoyance owing to the
want of it. The different expeditions up the Nile are generally, first, to
Thebes, which occupies about three weeks in average weather, including
your stay at the various places on your route: second, to the First Cataract,
which occupies about five weeks : and thirdly, to the Second Cataract, which
requires at least two months' absence from Cairo. From all that I have
heard and seen, I believe that none but the enthusiastic antiquary will find
any inducement to proceed further than this last place.