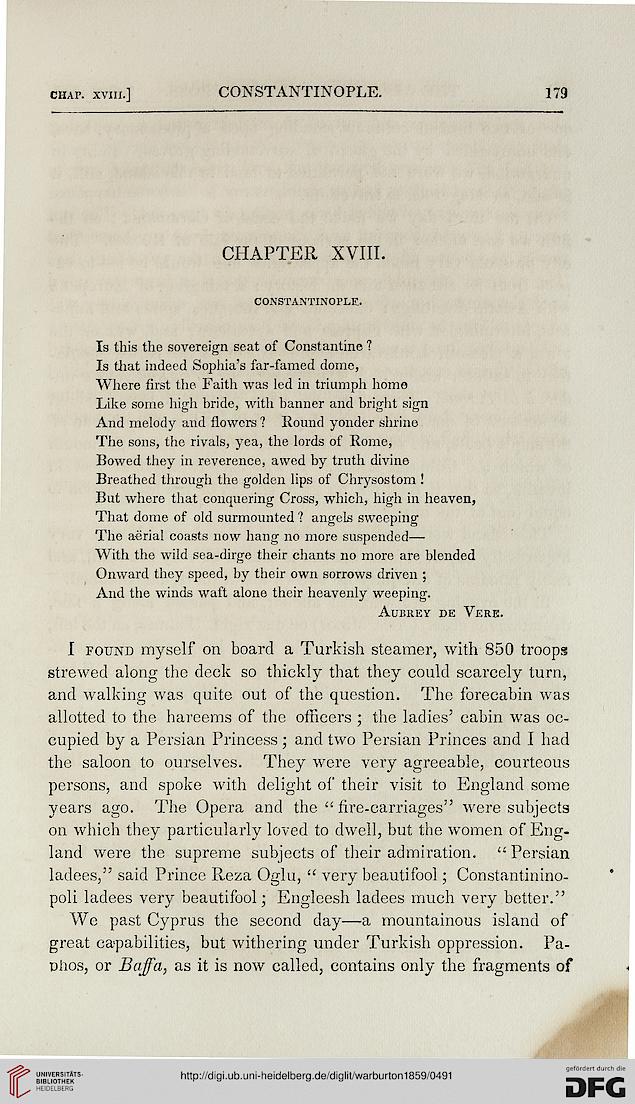 Is this the sovereign seat of Constantine ?

Is that indeed Sophia's far-famed dome,

Where first the Faith was led in triumph home

And melody and flowers ? Round yonder shrine

The sons, the rivals, yea, the lords of Rome,

Bowed they in reverence, awed by truth divine

Breathed through the golden lips of Chrysostom !

But where that conquering Cross, which, high in heaven,

With the wild sea-dirge their chants no more are blended

Onward they speed, by their own sorrows driven ;

And the winds waft alone their heavenly weeping.

I found myself on board a Turkish steamer, with 850 troops
strewed along the deck so thickly that they could scarcely turn,
and walking was quite out of the question. The forecabin was
allotted to the hareems of the officers ; the ladies' cabin was oc-
cupied by a Persian Princess ; and two Persian Princes and I had
the saloon to ourselves. They were very agreeable, courteous
persons, and spoke with delight of their visit to England some
years ago. The Opera and the " fire-carriages" were subjects
on which they particularly loved to dwell, but the women of Eng-
land were the supreme subjects of their admiration. " Persian
ladees," said Prince Reza Oglu, " very beautifool; Constantinino-
poli ladees very beautifool; Engleesh ladees much very better."

We past Cyprus the second day—a mountainous island of
great capabilities, but withering under Turkish oppression. Pa-
niios, or Baffa, as it is now called, contains only the fragments of