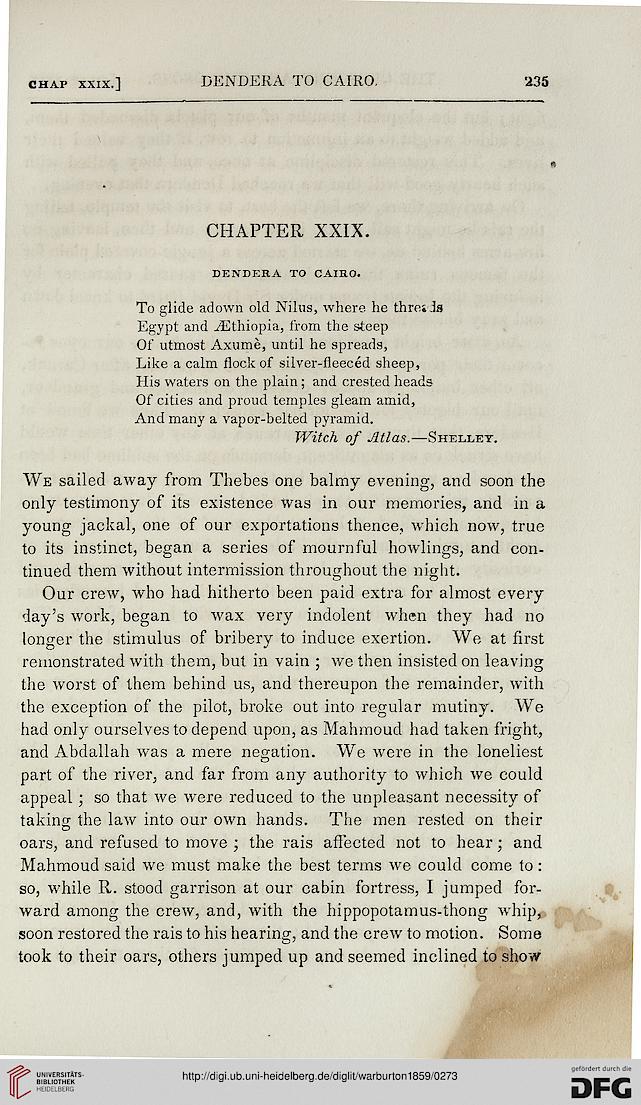 To glide adown old Nilus, where, he thret 3a
Egypt and ^Ethiopia, from the steep
Of utmost Axume, until he spreads,
Like a calm flock of silver-fleeced sheep,
His waters on the plain; and crested heads
Of cities and proud temples gleam amid,
And many a vapor-belted pyramid.

We sailed away from Thebes one balmy evening, and soon the
only testimony of its existence was in our memories, and in a
young jackal, one of our exportations thence, which now, true
to its instinct, began a series of mournful howlings, and con-
tinued them without intermission throughout the night.

Our crew, who had hitherto been paid extra for almost every
day's work, began to wax very indolent when they had no
longer the stimulus of bribery to induce exertion. We at first
remonstrated with them, but in vain ; we then insisted on leaving
the worst of them behind us, and thereupon the remainder, with
the exception of the pilot, broke out into regular mutiny. We
had only ourselves to depend upon, as Mahmoud had taken fright,
and Abdallah was a mere negation. We were in the loneliest
part of the river, and far from any authority to which we could
appeal ; so that we were reduced to the unpleasant necessity of
taking the law into our own hands. The men rested on their
oars, and refused to move ; the rais affected not to hear; and
Mahmoud said we must make the best terms we could come to :
so, while R. stood garrison at our cabin fortress, I jumped for-
ward among the crew, and, with the hippopotamus-thong whip,
soon restored the rais to his hearing, and the crew to motion. Some
took to their oars, others jumped up and seemed inclined to show