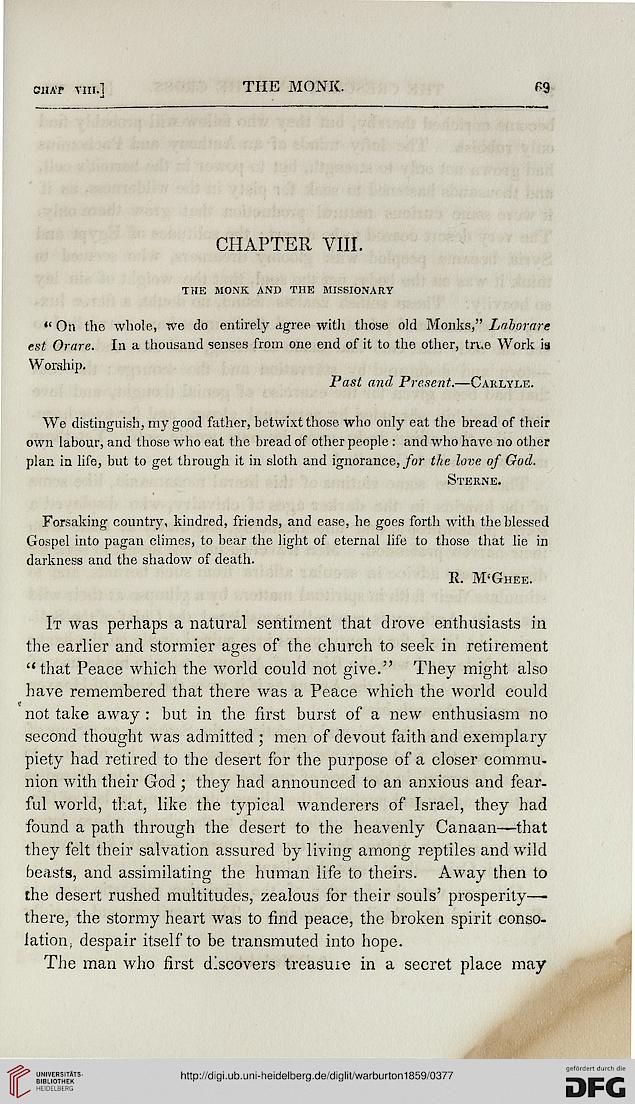 the monk and the missionary

*« On the whole, we do entirely agree with those old Monks," Laborare
est Orare. In a thousand senses from one end of it to the other, true Work ia
Worship.

We distinguish, my good father, betwixt those who only eat the bread of their
own labour, and those who eat the bread of other people: and who have no other
plan in life, but to get through it in sloth and ignorance, for the love of God.

Forsaking country, kindred, friends, and ease, he goes forth with the blessed
Gospel into pagan climes, to bear the light of eternal life to those that lie in
darkness and the shadow of death.

It was perhaps a natural sentiment that drove enthusiasts in
the earlier and stormier ages of the church to seek in retirement
"that Peace which the world could not give." They might also
have remembered that there was a Peace which the world could
not take away : but in the first burst of a new enthusiasm no
second thought was admitted ; men of devout faith and exemplary
piety had retired to the desert for the purpose of a closer commu.
nion with their God ; they had announced to an anxious and fear-
ful world, that, like the typical wanderers of Israel, they had
found a path through the desert to the heavenly Canaan—that
they felt their salvation assured by living among reptiles and wild
beasts, and assimilating the human life to theirs. Away then to
the desert rushed multitudes, zealous for their souls' prosperity—
there, the stormy heart was to find peace, the broken spirit conso-
lation; despair itself to be transmuted into hope.

The man who first discovers treasme in a secret place may