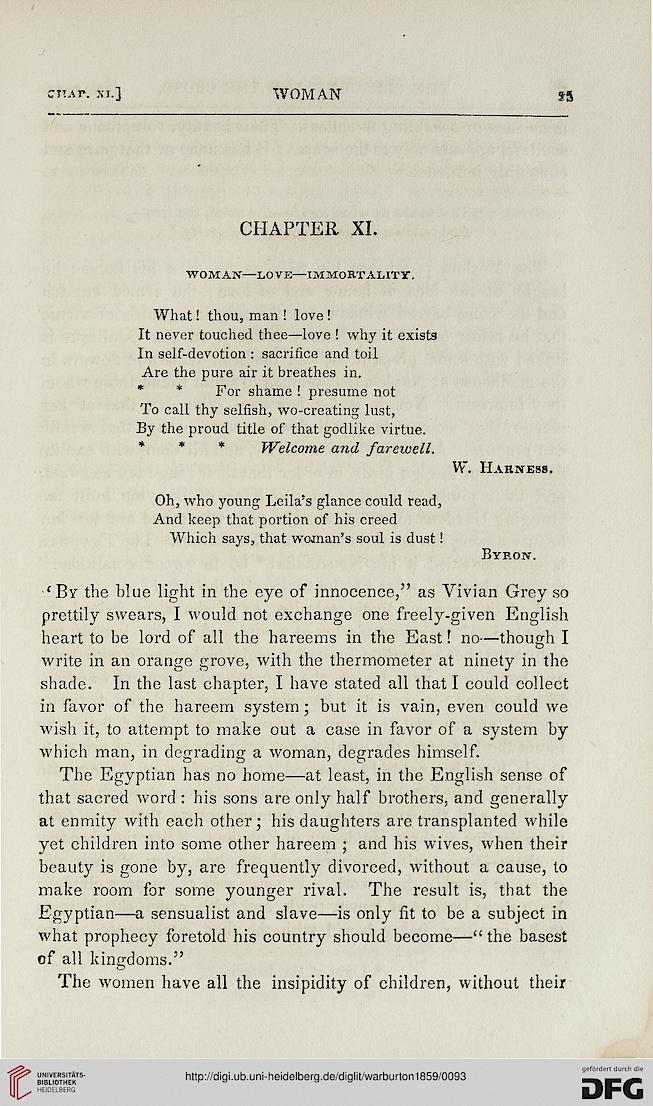 What! thou, man ! love!
It never touched thee—love ! why it exists
In self-devotion : sacrifice and toil
Are the pure air it breathes in.

* * For shame ! presume not
To call thy selfish, wo-creating lust,

By the proud title of that godlike virtue.

Oh, who young Leila's glance could read,
And keep that portion of his creed

Which says, that woman's soul is dust!

'By the blue light in the eye of innocence," as Vivian Grey so
prettily swears, I would not exchange one freely-given English
heart to be lord of all the hareems in the East! no—though I
write in an orange grove, with the thermometer at ninety in the
shade. In the last chapter, I have stated all that I could collect
in favor of the hareem system; but it is vain, even could we
wish it, to attempt to make out a case in favor of a system by
which man, in degrading a woman, degrades himself.

The Egyptian has no home—at least, in the English sense of
that sacred word : his sons are only half brothers, and generally
at enmity with each other; his daughters are transplanted while
yet children into some other hareem ; and his wives, when their
beauty is gone by, are frequently divorced, without a cause, to
make room for some younger rival. The result is, that the
Egyptian—a sensualist and slave—is only fit to be a subject in
what prophecy foretold his country should become—" the basest
of all kingdoms."

The women have all the insipidity of children, without their