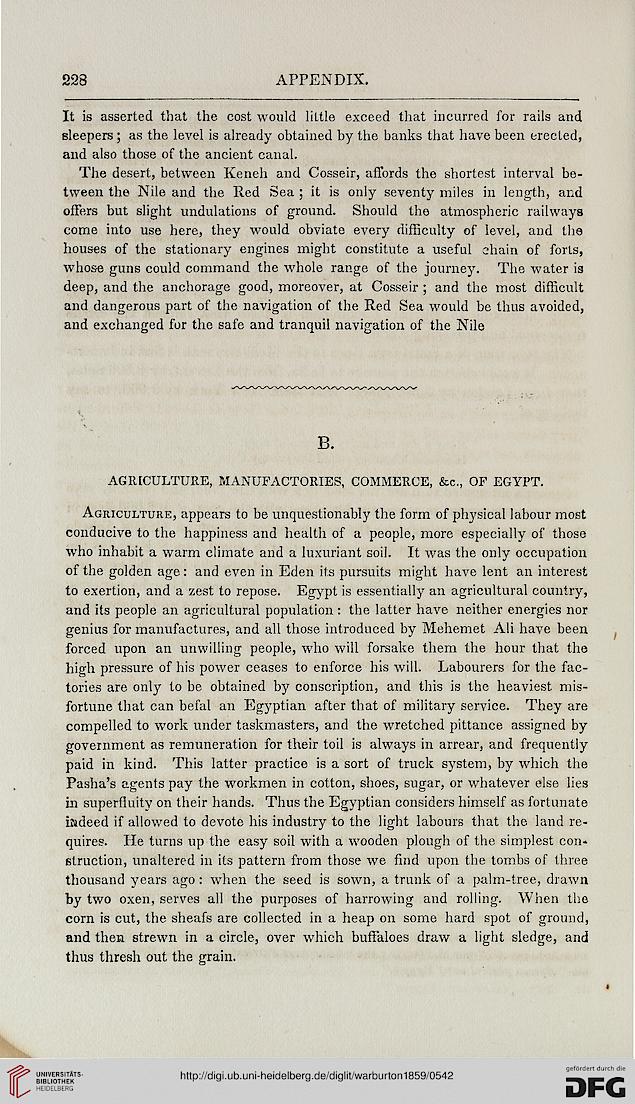 It is asserted that the cost would little exceed that incurred for rails and
sleepers ; as the level is already obtained by the banks that have been erected,
and also those of the ancient canal.

The desert, between Keneh and Cosseir, affords the shortest interval be-
tween the Nile and the Red Sea ; it is only seventy miles in length, and
offers but slight undulations of ground. Should the atmospheric railways
come into use here, they would obviate every difficulty of level, and the
houses of the stationary engines might constitute a useful chain of forts,
whose guns could command the whole range of the journey. The water is
deep, and the anchorage good, moreover, at Cosseir ; and the most difficult
and dangerous part of the navigation of the Red Sea would be thus avoided,
and exchanged for the safe and tranquil navigation of the Nile

Agriculture, appears to be unquestionably the form of physical labour most
conducive to the happiness and health of a people, more especially of those
who inhabit a warm climate and a luxuriant soil. It was the only occupation
of the golden age: and even in Eden its pursuits might have lent an interest
to exertion, and a zest to repose. Egypt is essentially an agricultural country,
and its people an agricultural population: the latter have neither energies nor
genius for manufactures, and all those introduced by Mehemet Ali have been
forced upon an unwilling people, who will forsake them the hour that the
high pressure of his power ceases to enforce his will. Labourers for the fac-
tories are only to be obtained by conscription, and this is the heaviest mis-
fortune that can befal an Egyptian after that of military service. They are
compelled to work under taskmasters, and the wretched pittance assigned by
government as remuneration for their toil is always in arrear, and frequently
paid in kind. This latter practice is a sort of truck system, by which the
Pasha's agents pay the workmen in cotton, shoes, sugar, or whatever else lies
in superfluity on their hands. Thus the Egyptian considers himself as fortunate
iindeed if allowed to devote his industry to the light labours that the land re-
quires. He turns up the easy soil with a wooden plough of the simplest con-
struction, unaltered in its pattern from those we find upon the tombs of three
thousand years ago : when the seed is sown, a trunk of a palm-tree, drawn
by two oxen, serves all the purposes of harrowing and rolling. When the
corn is cut, the sheafs are collected in a heap on some hard spot of ground,
and then strewn in a circle, over which buffaloes draw a light sledge, and
thus thresh out the grain.