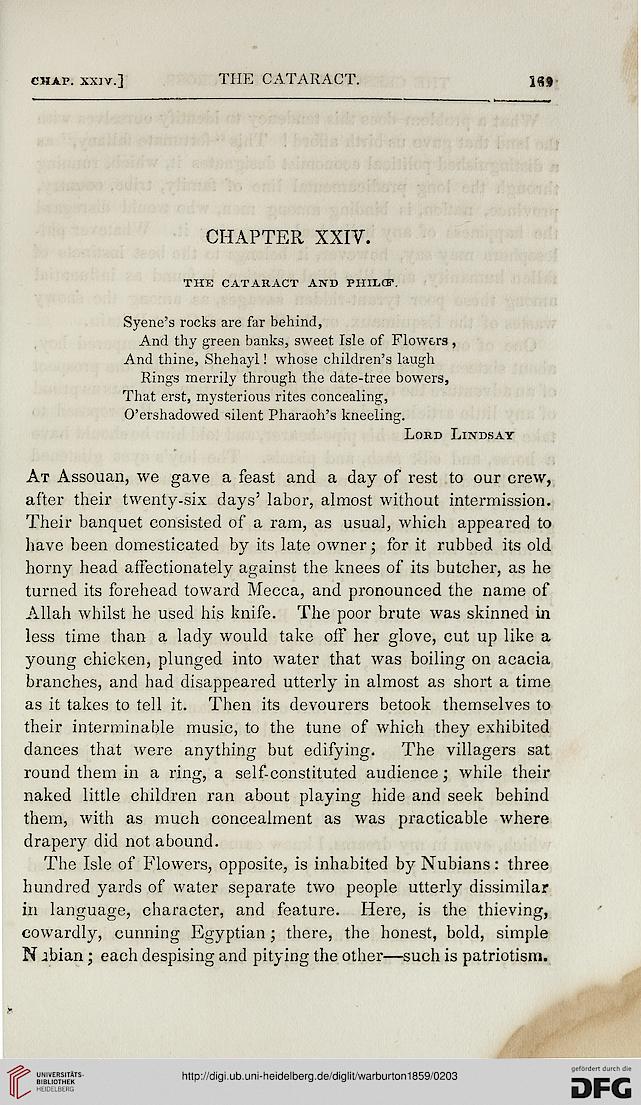 Syene's rocks are far behind,

And thy green banks, sweet Isle of Flowers,
And thine, Shehayl! whose children's laugh

At Assouan, we gave a feast and a day of rest to our crew,
after their twenty-six days' labor, almost without intermission.
Their banquet consisted of a ram, as usual, which appeared to
have been domesticated by its late owner; for it rubbed its old
horny head affectionately against the knees of its butcher, as he
turned its forehead toward Mecca, and pronounced the name of
Allah whilst he used his knife. The poor brute was skinned in
less time than a lady would take off her glove, cut up like a
young chicken, plunged into water that was boiling on acacia
branches, and had disappeared utterly in almost as short a time
as it takes to tell it. Then its devourers betook themselves to
their interminable music, to the tune of which they exhibited
dances that were anything but edifying. The villagers sat
round them in a ring, a self-constituted audience; while their
naked little children ran about playing hide and seek behind
them, with as much concealment as was practicable where
drapery did not abound.

The Isle of Flowers, opposite, is inhabited by Nubians: three
hundred yards of water separate two people utterly dissimilar
in language, character, and feature. Here, is the thieving,
cowardly, cunning Egyptian; there, the honest, bold, simple
Nubian; each despising and pitying the other—such is patriotism.