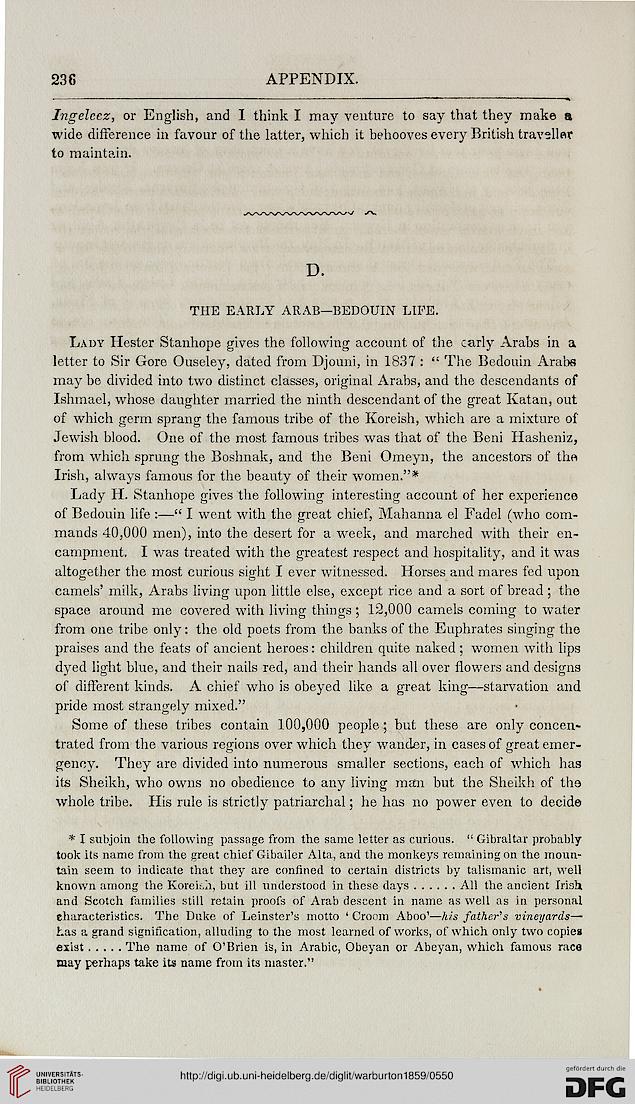 Ingelccz, or English, and I think I may venture to say that they make a
wide difference in favour of the latter, which it behooves every British traveller
to maintain.

Lady Hester Stanhope gives the following account of the early Arabs in a
letter to Sir Gore Ouseley, dated from Djouni, in 1837 : " The Bedouin Arabs
may be divided into two distinct classes, original Arabs, and the descendants of
Ishmael, whose daughter married the ninth descendant of the great Katan, out
of which germ sprang the famous tribe of the Koreish, which are a mixture of
Jewish blood. One of the most famous tribes was that of the Beni Hasheniz,
from which sprung the Boshnak, and the Beni Omeyn, the ancestors of the
Irish, always famous for the beauty of their women."*

Lady H. Stanhope gives the following interesting account of her experience
of Bedouin life :—" I went with the great chief, Mahanna el Fadel (who com-
mands 40,000 men), into the desert for a week, and marched with their en-
campment. I was treated with the greatest respect and hospitality, and it was
altogether the most curious sight I ever witnessed. Horses and mares fed upon
camels' milk, Arabs living upon little else, except rice and a sort of bread ; the
space around me covered with living things ; 12,000 camels coming to water
from one tribe only: the old poets from the banks of the Euphrates singing the
praises and the feats of ancient heroes: children quite naked; women with lips
dyed light blue, and their nails red, and their hands all over flowers and designs
of different kinds. A chief who is obeyed like a great king—starvation and
pride most strangely mixed."

Some of these tribes contain 100,000 people; but these are only concen-
trated from the various regions over which they wander, in cases of great emer-
gency. They are divided into numerous smaller sections, each of which has
its Sheikh, who owns no obedience to any living man but the Sheikh of the
whole tribe. His rule is strictly patriarchal; he has no power even to decide

* I subjoin the following passage from the same letter as curious. " Gibraltar probably
took its name from the great chief Gibailer Alta, and the monkeys remaining on the moun-
tain seem to indicate that they are confined to certain districts by talismanic art, well

known among the Koreish, but ill understood in these days......All the ancient Irish

and Scotch families still retain proofs of Arab descent in name as well as in personal
characteristics. The Duke of Leinster's motto ' Croom Aboo1—his father's vineyards-—
Las a grand signification, alluding to the most learned of works, of which only two copies

may perhaps take its name from its master."