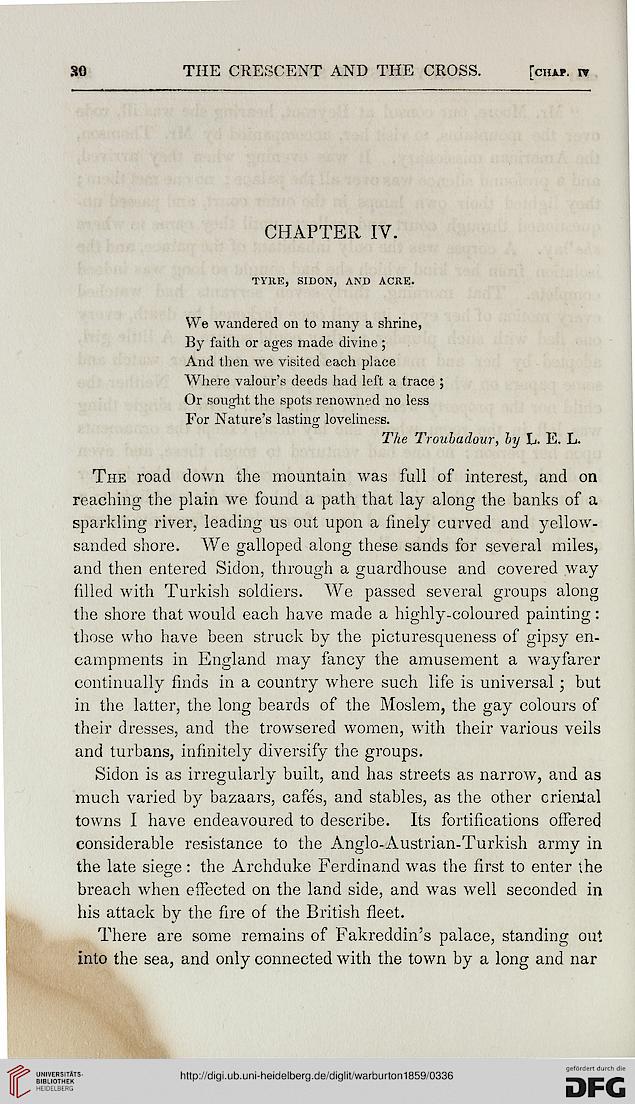 Information about OCR text
SO THE CRESCENT AND THE CROSS. [chap, it

We wandered on to many a shrine,
By faith or ages made divine ;
And then we visited each place
Where valour's deeds had left a trace ;
Or sought the spots renowned no less
For Nature's lasting loveliness.

The road down the mountain was full of interest, and on
reaching the plain we found a path that lay along the banks of a
sparkling river, leading us out upon a finely curved and yellow-
sanded shore. We galloped along these sands for several miles,
and then entered Sidon, through a guardhouse and covered way
filled with Turkish soldiers. We passed several groups along
the shore that would each have made a highly-coloured painting:
those who have been struck by the picturesqueness of gipsy en-
campments in England may fancy the amusement a wayfarer
continually finds in a country where such life is universal ; but
in the latter, the long beards of the Moslem, the gay colours of
their dresses, and the trowsered women, with their various veils
and turbans, infinitely diversify the groups.

Sidon is as irregularly built, and has streets as narrow, and as
much varied by bazaars, cafes, and stables, as the other oriental
towns I have endeavoured to describe. Its fortifications offered
considerable resistance to the Anglo-Austrian-Turkish army in
the late siege : the Archduke Ferdinand was the first to enter the
breach when effected on the land side, and was well seconded in
his attack by the fire of the British fleet.

There are some remains of Fakreddin's palace, standing out
into the sea, and only connected with the town by a long and nar