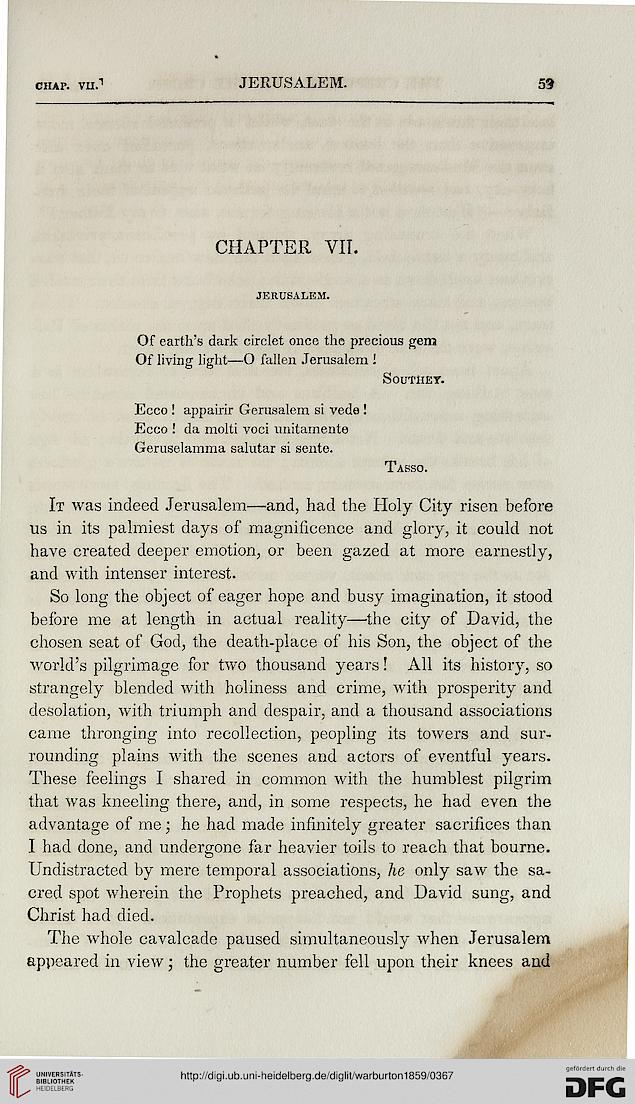 Of earth's dark circlet once the precious gem
Of living light—O fallen Jerusalem !

It was indeed Jerusalem—and, had the Holy City risen before
us in its palmiest days of magnificence and glory, it could not
have created deeper emotion, or been gazed at more earnestly,
and with intenser interest.

So long the object of eager hope and busy imagination, it stood
before me at length in actual reality—the city of David, the
chosen seat of God, the death-place of his Son, the object of the
world's pilgrimage for two thousand years! All its history, so
strangely blended with holiness and crime, with prosperity and
desolation, with triumph and despair, and a thousand associations
came thronging into recollection, peopling its towers and sur-
rounding plains with the scenes and actors of eventful years.
These feelings I shared in common with the humblest pilgrim
that was kneeling there, and, in some respects, he had even the
advantage of me; he had made infinitely greater sacrifices than
I had done, and undergone far heavier toils to reach that bourne.
Undistracted by mere temporal associations, he only saw the sa-
cred spot wherein the Prophets preached, and David sung, and
Christ had died.

The whole cavalcade paused simultaneously when Jerusalem
appeared in view; the greater number fell upon their knees and