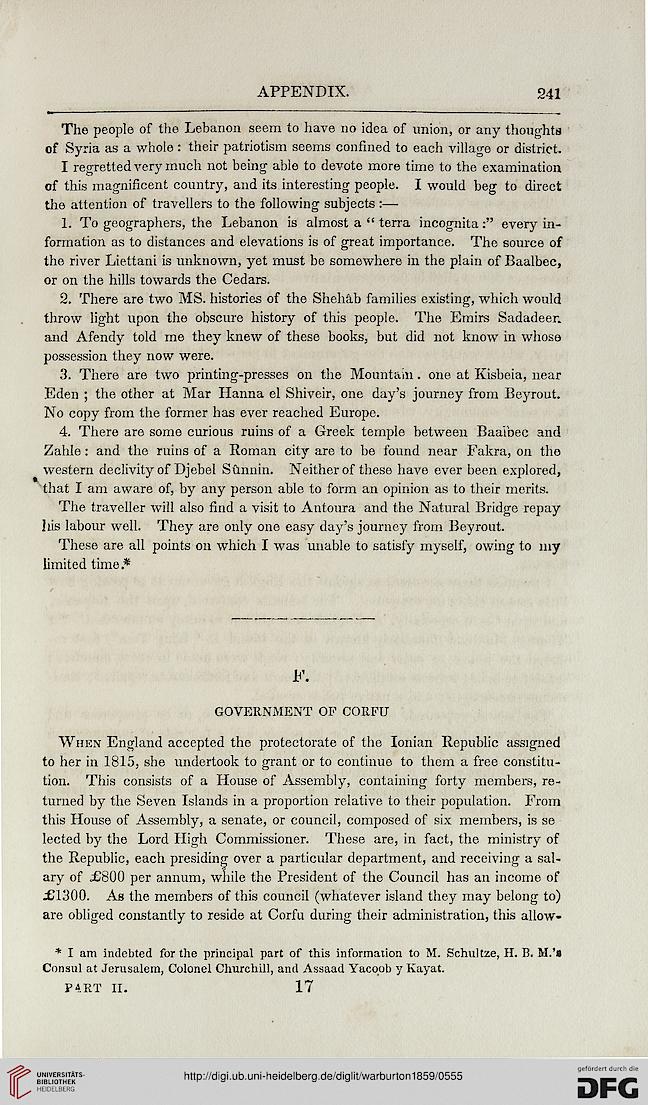 The people of the Lebanon seem to have no idea of union, or any thoughts
of Syria as a whole : their patriotism seems confined to each village or district.

I regretted very much not being able to devote more time to the examination
of this magnificent country, and its interesting people. I would beg- to direct
the attention of travellers to the following subjects :—

1. To geographers, the Lebanon is almost a " terra incognita:" every in-
formation as to distances and elevations is of great importance. The source of
the river Liettani is unknown, yet must be somewhere in the plain of Baalbec,
or on the hills towards the Cedars.

2. There are two MS. histories of the Shehab families existing, which would
throw light upon the obscure history of this people. The Emirs Sadadeen
and Afendy told me they knew of these books, but did not know in whose
possession they now were.

3. There are two printing-presses on the Mountain. one at Kisbeia, near
Eden ; the other at Mar Hanna el Shiveir, one day's journey from Beyrout.
No copy from the former has ever reached Europe.

4. There are some curious ruins of a Greek temple between Baaibec and
Zahle : and the ruins of a Roman city are to be found near Fakra, on the
western declivity of Djebel Sfinnin. Neither of these have ever been explored,
that I am aware of, by any person able to form an opinion as to their merits.

The traveller will also find a visit to Antoura and the Natural Bridge repay
liis labour well. They are only one easy day's journey from Beyrout.

These are all points on which I was unable to satisfy myself, owing to my
limited time.*

When England accepted the protectorate of the Ionian Republic assigned
to her in 1815, she undertook to grant or to continue to them a free constitu-
tion. This consists of a House of Assembly, containing forty members, re-
turned by the Seven Islands in a proportion relative to their population. From
this House of Assembly, a senate, or council, composed of six members, is se
lected by the Lord High Commissioner. These are, in fact, the ministry of
the Republic, each presiding over a particular department, and receiving a sal-
ary of .£800 per annum, while the President of the Council has an income of
£1300. As the members of this council (whatever island they may belong to)
are obliged constantly to reside at Corfu during their administration, this allow-

* I am indebted for the principal part of this information to M. Schultze, H. B. M.'»
Consul at Jerusalem, Colonel Churchill, and Assaad Yacoob y Kayat.