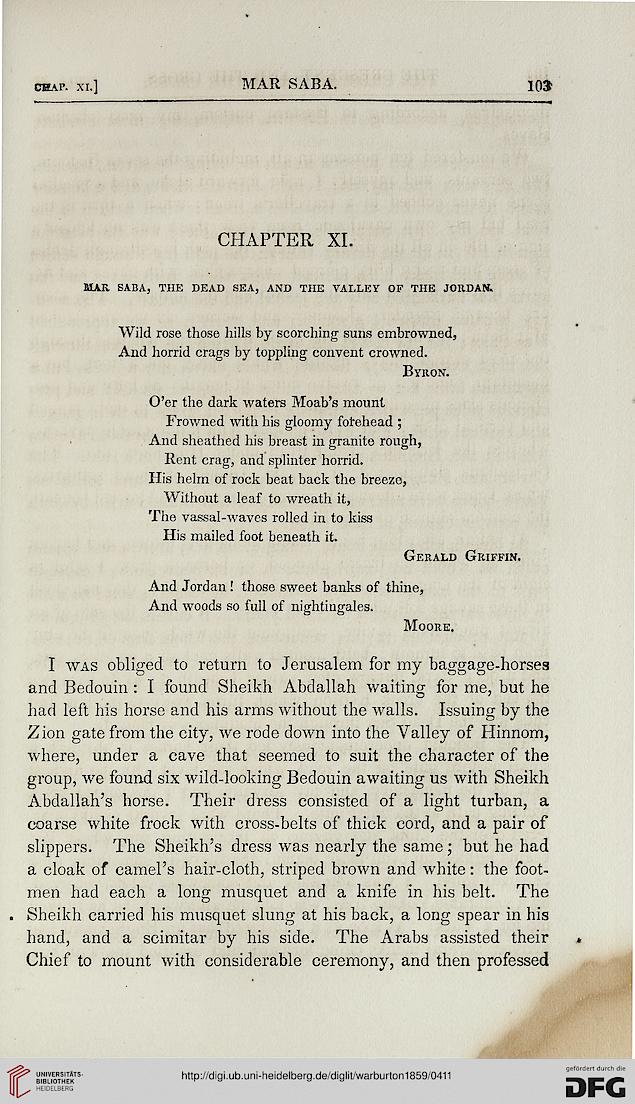 mar saba, the dead sea, and the valley of the jordan.

Frowned with his gloomy forehead ;
And sheathed his breast in granite rough,

Rent crag, and splinter horrid.
His helm of rock beat back the breeze,

Without a leaf to wreath it,
The vassal-waves rolled in to kiss

His mailed foot beneath it

And Jordan! those sweet banks of thine,
And woods so full of nightingales.

I was obliged to return to Jerusalem for my baggage-horses
and Bedouin : I found Sheikh Abdallah waiting for me, but he
had left his horse and his arms without the walls. Issuing by the
Zion gate from the city, we rode down into the Valley of Hinnom,
where, under a cave that seemed to suit the character of the
group, we found six wild-looking Bedouin awaiting us with Sheikh
Abdallah's horse. Their dress consisted of a light turban, a
coarse white frock with cross-belts of thick cord, and a pair of
slippers. The Sheikh's dress was nearly the same; but he had
a cloak of camel's hair-cloth, striped brown and white: the foot-
men had each a long musquet and a knife in his belt. The
Sheikh carried his musquet slung at his back, a long spear in his
hand, and a scimitar by his side. The Arabs assisted their
Chief to mount with considerable ceremony, and then professed