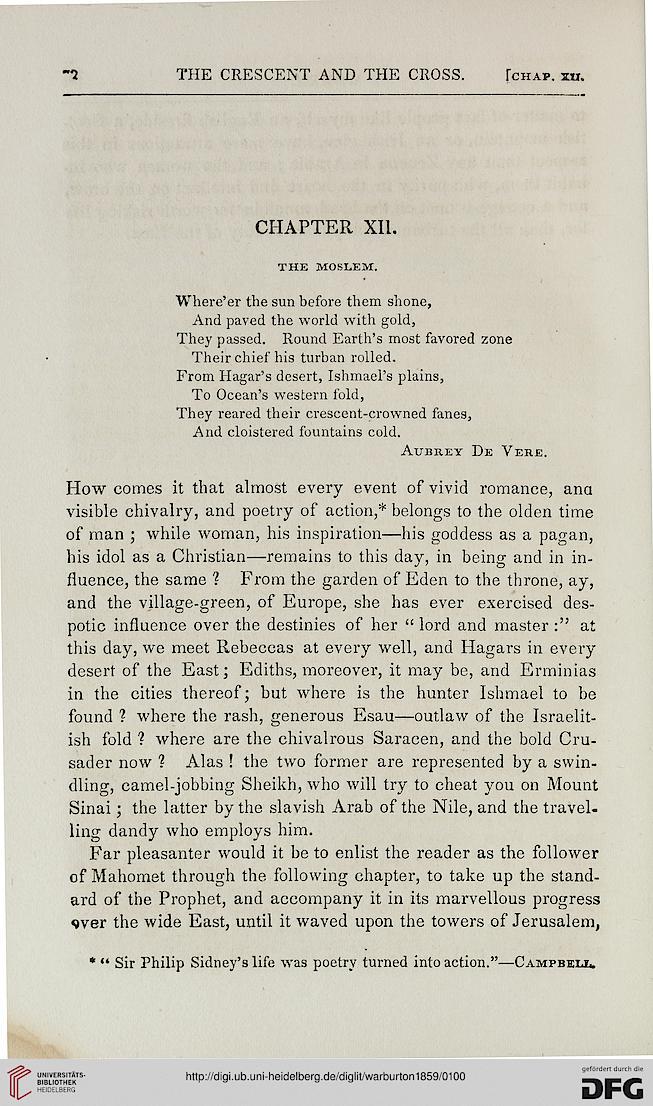 Information about OCR text
THE CRESCENT AND THE CROSS.

Where'er the sun before them shone,

And paved the world with gold,
They passed. Round Earth's most favored zone

Their chief his turban rolled.
From Hagar's desert, Ishmael's plains,

To Ocean's western fold,
They reared their crescent-crowned fanes,

How comes it that almost every event of vivid romance, ana
visible chivalry, and poetry of action,* belongs to the olden time
of man ; while woman, his inspiration—his goddess as a pagan,
his idol as a Christian—remains to this day, in being and in in-
fluence, the same ? From the garden of Eden to the throne, ay,
and the village-green, of Europe, she has ever exercised des-
potic influence over the destinies of her " lord and master :" at
this day, we meet Rebeccas at every well, and Hagars in every
desert of the East; Ediths, moreover, it may be, and Erminias
in the cities thereof; but where is the hunter Ishmael to be
found ? where the rash, generous Esau—outlaw of the Israelit-
ish fold ? where are the chivalrous Saracen, and the bold Cru-
sader now 1 Alas ! the two former are represented by a swin-
dling, camel-jobbing Sheikh, who will try to cheat you on Mount
Sinai; the latter by the slavish Arab of the Nile, and the travel-
ling dandy who employs him.

Far pleasanter would it be to enlist the reader as the follower
of Mahomet through the. following chapter, to take up the stand-
ard of the Prophet, and accompany it in its marvellous progress
<)ver the wide East, until it waved upon the towers of Jerusalem,