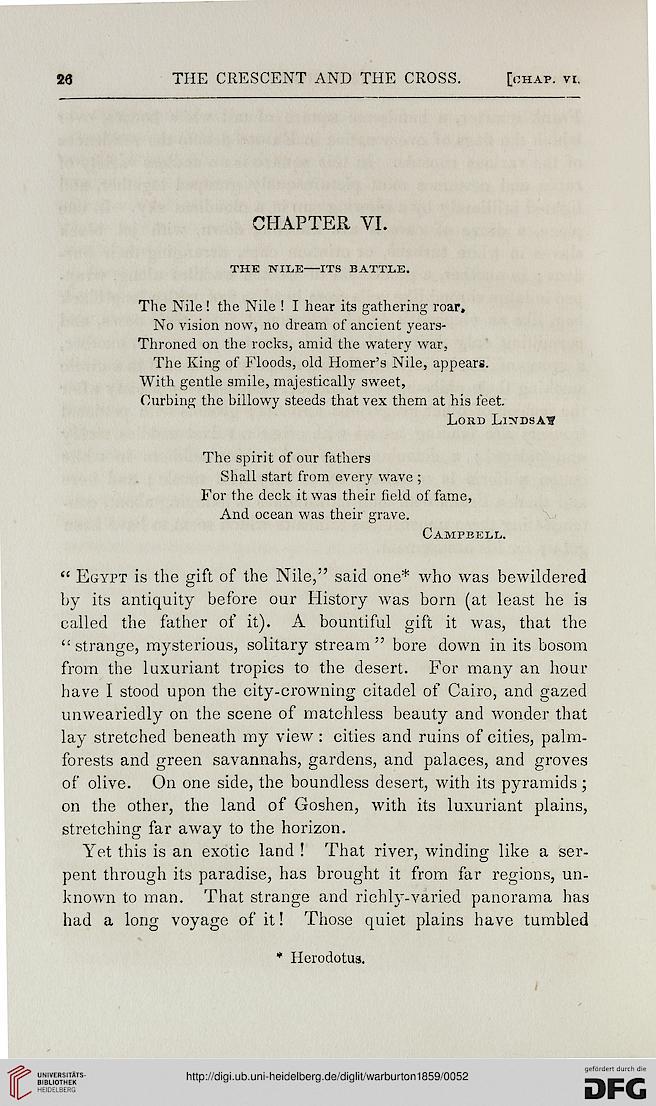 The Nile! the Nile ! I hear its gathering roar.

No vision now, no dream of ancient years-
Throned on the rocks, amid the watery war,

The King of Floods, old Homer's Nile, appears.
With gentle smile, majestically sweet,
Curbing the billowy steeds that vex them at his feet.

The spirit of our fathers

Shall start from every wave ;
For the deck it was their field of fame,

And ocean was their grave.

" Egypt is the gift of the Nile," said one* who was bewildered
by its antiquity before our History was bora (at least he is
called the father of it). A bountiful gift it was, that the
"strange, mysterious, solitary stream" bore down in its bosom
from the luxuriant tropics to the desert. For many an hour
have I stood upon the city-crowning citadel of Cairo, and gazed
unweariedly on the scene of matchless beauty and wonder that
lay stretched beneath my view: cities and ruins of cities, palm-
forests and green savannahs, gardens, and palaces, and groves
of olive. On one side, the boundless desert, with its pyramids ;
on the other, the land of Goshen, with its luxuriant plains,
stretching far away to the horizon.

Yet this is an exotic land ! That river, winding like a ser-
pent through its paradise, has brought it from far regions, un-
known to man. That strange and richly-varied panorama has
had a long voyage of it! Those quiet plains have tumbled