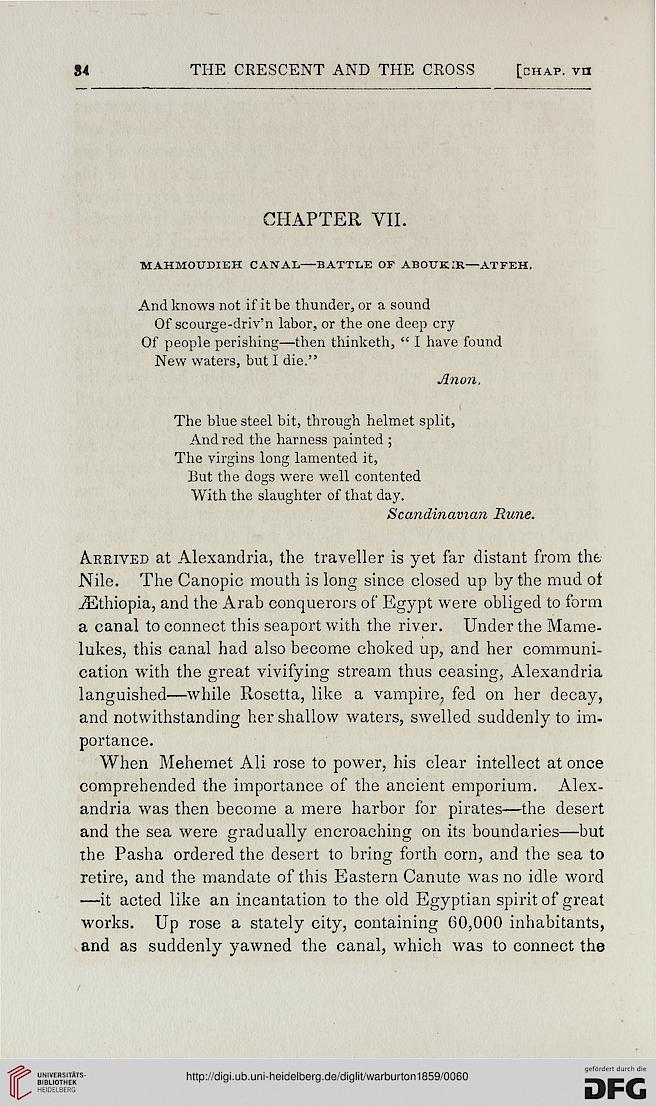 THE CRESCENT AND THE CROSS [chap, vn

And knows not if it be thunder, or a sound

Of scourge-driv'n labor, or the one deep cry
Of people perishing—then thinketh, " I have found

And red the harness painted ;
The virgins long lamented it,

But the dogs were well contented

With the slaughter of that day.

Arrived at Alexandria, the traveller is yet far distant from the
Nile. The Canopic mouth is long since closed up by the mud ot
^Ethiopia, and the Arab conquerors of Egypt were obliged to form
a canal to connect this seaport with the river. Under the Mame-
lukes, this canal had also become choked up, and her communi-
cation with the great vivifying stream thus ceasing, Alexandria
languished—while Rosetta, like a vampire, fed on her decay,
and notwithstanding her shallow waters, swelled suddenly to im-
portance.

When Mehemet Ali rose to power, his clear intellect at once
comprehended the importance of the ancient emporium. Alex-
andria was then become a mere harbor for pirates—the desert
and the sea were gradually encroaching on its boundaries—but
the Pasha ordered the desert to bring forth corn, and the sea to
retire, and the mandate of this Eastern Canute was no idle word
—it acted like an incantation to the old Egyptian spirit of great
works. Up rose a stately city, containing 60,000 inhabitants,
and as suddenly yawned the canal, which was to connect the