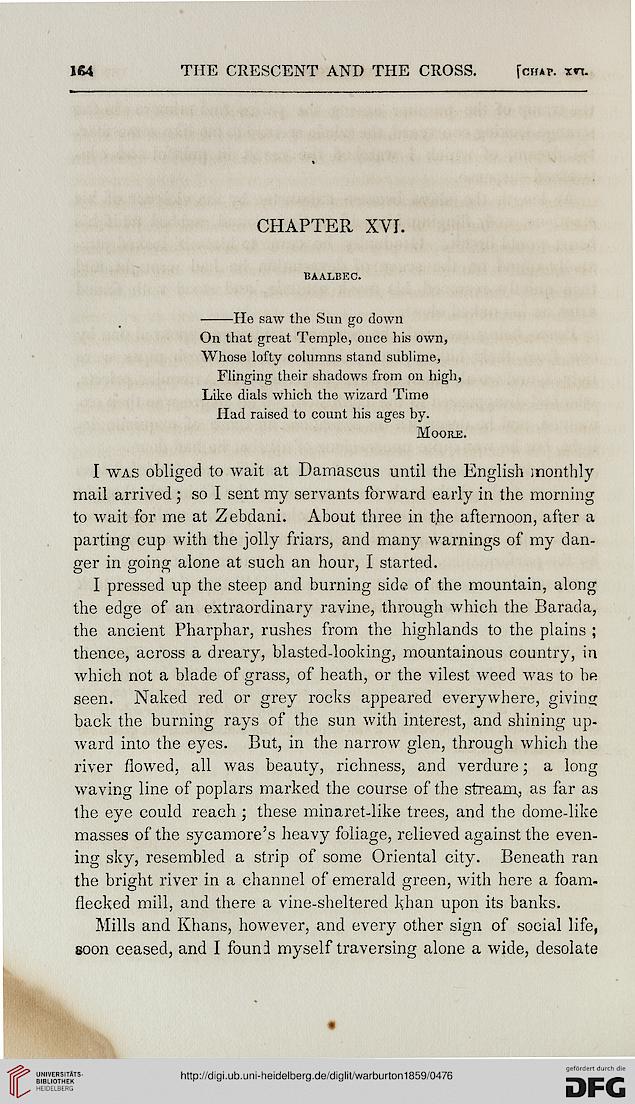 -He saw the Sun go down

On that great Temple, once his own,
Whose lofty columns stand sublime,

Flinging their shadows from on high,
Like dials which the wizard Time

Had raised to count his ages by.

I was obliged to wait at Damascus until the English monthly
mail arrived ; so I sent my servants forward early in the morning
to wait for me at Zebdani. About three in the afternoon, after a
parting cup with the jolly friars, and many warnings of my dan-
ger in going alone at such an hour, I started.

I pressed up the steep and burning side of the mountain, along
the edge of an extraordinary ravine, through which the Barada,
the ancient Pharphar, rushes from the highlands to the plains ;
thence, across a dreary, blasted-looking, mountainous country, in
which not a blade of grass, of heath, or the vilest weed was to he
seen. Naked red or grey rocks appeared everywhere, giving
back the burning rays of the sun with interest, and shining up-
ward into the eyes. But, in the narrow glen, through which the
river flowed, all was beauty, richness, and verdure; a long
waving line of poplars marked the course of the stream^ as far as
the eye could reach ; these minaret-like trees, and the dome-like
masses of the sycamore's heavy foliage, relieved against the even-
ing sky, resembled a strip of some Oriental city. Beneath ran
the bright river in a channel of emerald green, with here a foam-
flecked mill, and there a vine-sheltered khan upon its banks.

Mills and Khans, however, and every other sign of social life,
soon ceased, and I found myself traversing alone a wide, desolate