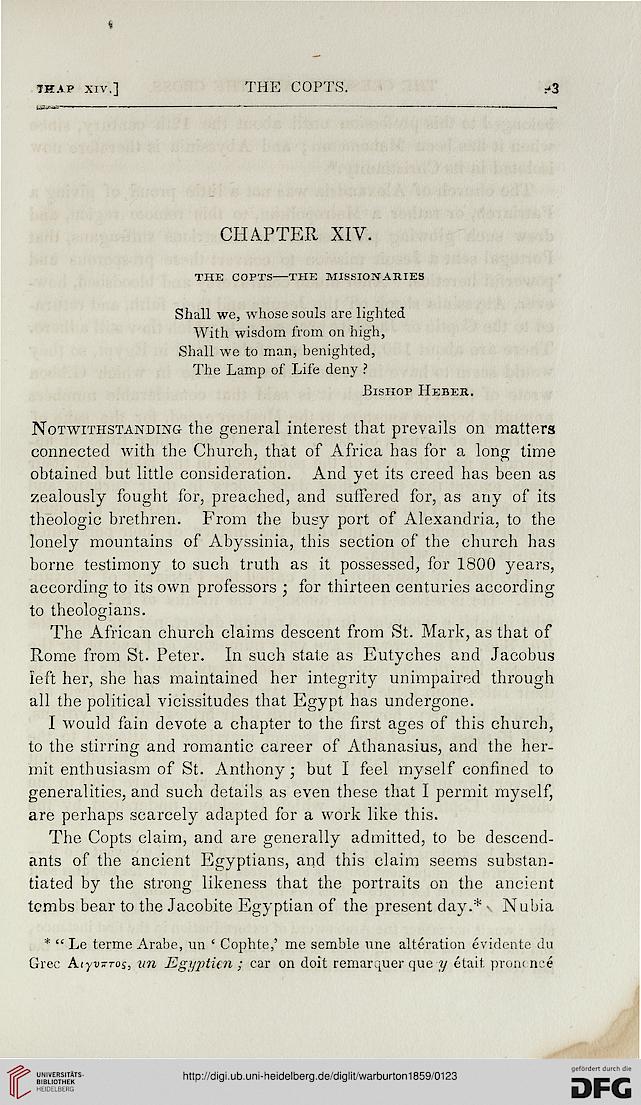 Shall we, whose souls are lighted

With wisdom from on high,
Shall we to man, benighted,

The Lamp of Life deny ?

Notwithstanding the general interest that prevails on matters
connected with the Church, that of Africa has for a long time
obtained but little consideration. And yet its creed has been as
zealously fought for, preached, and suffered for, as any of its
theologic brethren. From the busy port of Alexandria, to the
lonely mountains of Abyssinia, this section of the church has
borne testimony to such truth as it possessed, for 1800 years,
according to its own professors ; for thirteen centuries according
to theologians.

The African church claims descent from St. Mark, as that of
Rome from St. Peter. In such state as Eutyches and Jacobus
left her, she has maintained her integrity unimpaired through
all the political vicissitudes that Egypt has undergone.

I would fain devote a chapter to the first ages of this church,
to the stirring and romantic career of Athanasius, and the her-
mit enthusiasm of St. Anthony; but I feel myself confined to
generalities, and such details as even these that I permit myself,
are perhaps scarcely adapted for a work like this.

The Copts claim, and are generally admitted, to be descend-
ants of the ancient Egyptians, and this claim seems substan-
tiated by the strong likeness that the portraits on the ancient
tcmbs bear to the Jacobite Egyptian of the present day.* Nubia