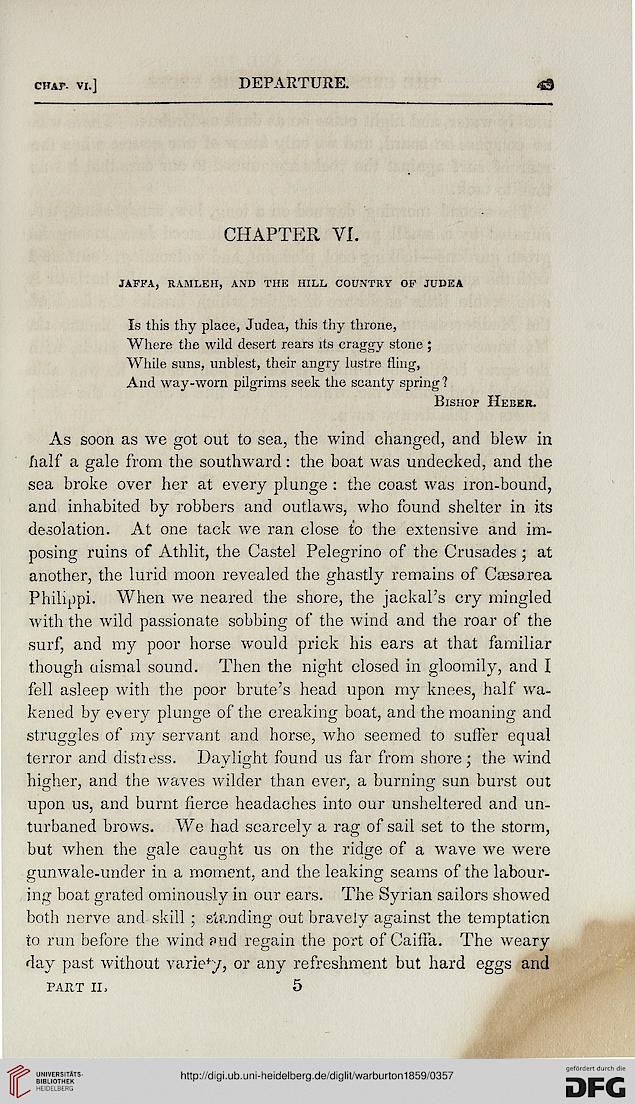 jaffa, ramleh, and the hill, country of judea

Is this thy place, Judea, this thy throne,
Where the wild desert rears its craggy stone ;
While suns, unblest, their angry lustre fling,
And way-worn pilgrims seek the scanty spring ?

As soon as we got out to sea, the wind changed, and blew in
half a gale from the southward: the boat was undecked, and the
sea broke over her at every plunge : the coast was iron-bound,
and inhabited by robbers and outlaws, who found shelter in its
desolation. At one tack we ran close to the extensive and im-
posing ruins of Athlit, the Castel Pelegrino of the Crusades ; at
another, the lurid moon revealed the ghastly remains of Cassarea
Philippi. When we neared the shore, the jackal's cry mingled
with the wild passionate sobbing of the wind and the roar of the
surf, and my poor horse would prick his ears at that familiar
though aismal sound. Then the night closed in gloomily, and I
fell asleep with the poor brute's head upon my knees, half wa-
kened by every plunge of the creaking boat, and the moaning and
struggles of my servant and horse, who seemed to suffer equal
terror and distress. Daylight found us far from shore; the wind
higher, and the waves wilder than ever, a burning sun burst out
upon us, and burnt fierce headaches into our unsheltered and un-
turbaned brows. We had scarcely a rag of sail set to the storm,
but when the gale caught us on the ridge of a wave we were
gunwale-under in a moment, and the leaking seams of the labour-
ing boat grated ominously in our ears. The Syrian sailors showed
both nerve and skill ; standing out bravely against the temptation
to run before the wind fmd regain the port of Caiffa. The weary
day past without variety, or any refreshment but hard eggs and