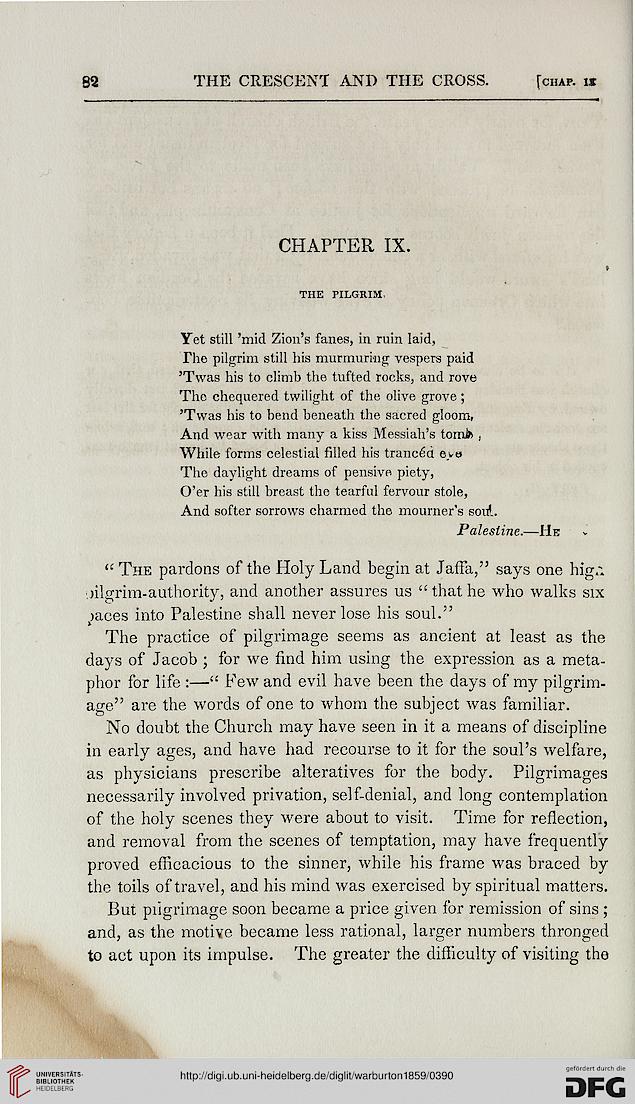 Yet still 'mid Zion's fanes, in ruin laid,
The pilgrim still his murmuring vespers paid
'Twas his to climb the tufted rocks, and rove
The chequered twilight of the olive grove ;
'Twas his to bend beneath the sacred gloom,
And wear with many a kiss Messiah's tom> ,
While forms celestial filled his tranced e>a
The daylight dreams of pensive piety,
O'er his still breast the tearful fervour stole,
And softer sorrows charmed the mourner's soul.

" The pardons of the Holy Land begin at Jaffa," says one higr,
nlgrim-authority, and another assures us " that he who walks six
mces into Palestine shall never lose his soul."

The practice of pilgrimage seems as ancient at least as the
days of Jacob ; for we find him using the expression as a meta-
phor for life :—" Few and evil have been the days of my pilgrim-
age" are the words of one to whom the subject was familiar.

No doubt the Church may have seen in it a means of discipline
in early ages, and have had recourse to it for the soul's welfare,
as physicians prescribe alteratives for the body. Pilgrimages
necessarily involved privation, self-denial, and long contemplation
of the holy scenes they were about to visit. Time for reflection,
and removal from the scenes of temptation, may have frequently
proved efficacious to the sinner, while his frame was braced by
the toils of travel, and his mind was exercised by spiritual matters.

But pilgrimage soon became a price given for remission of sins ;
and, as the motive became less rational, larger numbers thronged
to act upon its impulse. The greater the difficulty of visiting the