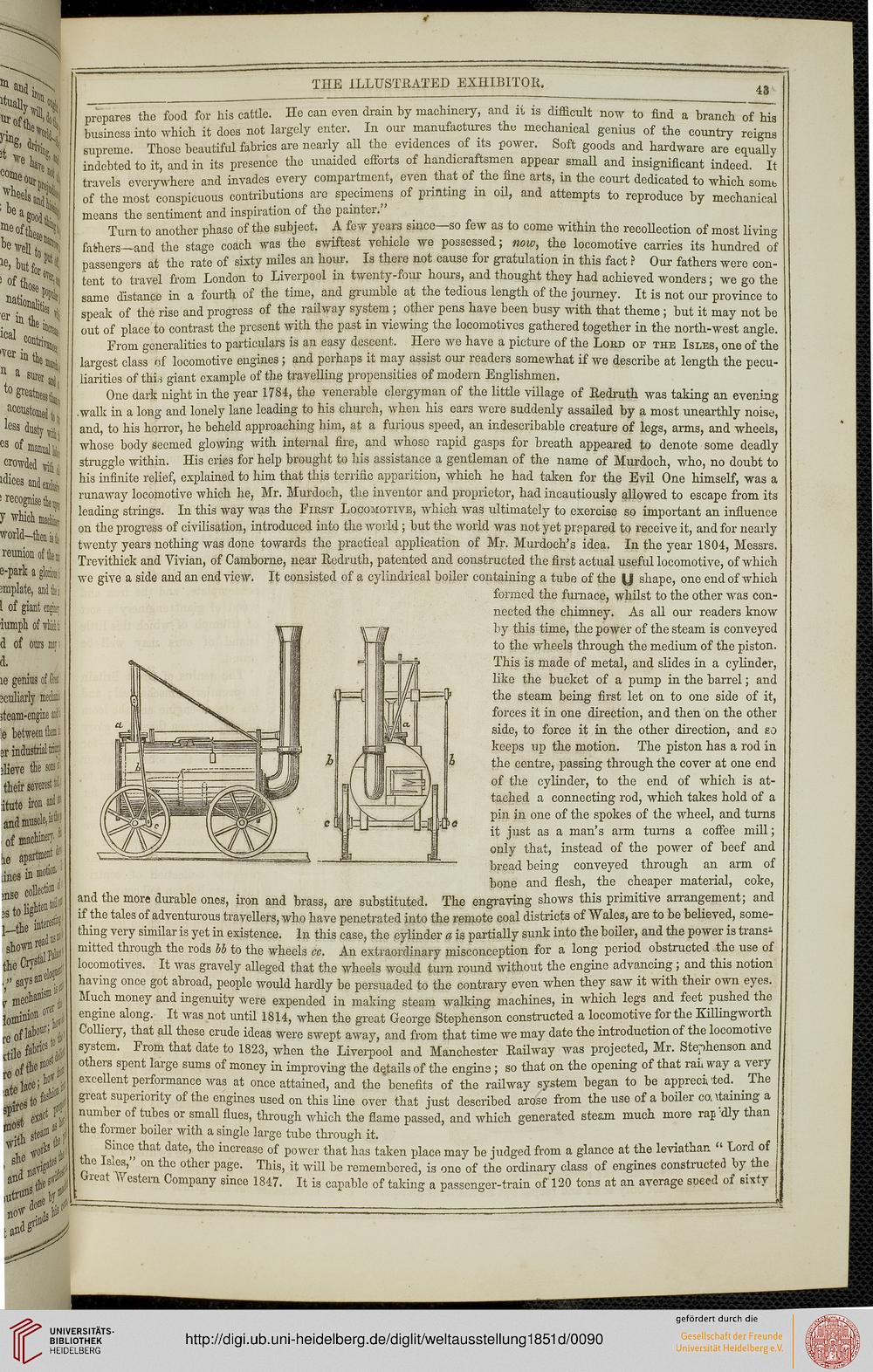 I of giant enginf-
iumph of \ritti
d of ours mji
d.

i of machine'
he apartment fc

prepares the food for his cattle. He can even drain hy machinery, and it is difficult now to find a branch of his
business into which it does not largely enter. In our manufactures the mechanical genius of the country reigns
supreme. Those beautiful fabrics are nearly all the evidences of its power. Soft goods and hardware are equally
indebted to it, and in its presence the unaided efforts of handicraftsmen appear small and insignificant indeed. It
travels everywhere and invades every compartment, even that of the fine arts, in the court dedicated to which somb
of the most conspicuous contributions are specimens of printing in oil, and attempts to reproduce by mechanical
means the sentiment and inspiration of the painter."

Turn to another phase of the subject. A few years since—so few as to come within the recollection of most living
fathers—and the stage coach was the swiftest vehicle we possessed; now, the locomotive carries its hundred of
passengers at the rate of sixty miles an hour. Is there not cause for gratulation in this fact ? Our fathers were con-
tent to travel from London to Liverpool in twenty-four hours, and thought they had achieved wonders; we go the
same distance in a fourth of the time, and grumble at the tedious length of the journey. It is not our province to
speak of the rise and progress of the railway system; other pens have been busy with that theme; but it may not be
out of place to contrast the present with the past in viewing the locomotives gathered together in the north-west angle.
From generalities to particulars is an easy descent. Here we have a picture of the Lord op the Isles, one of the
largest class of locomotive engines; and perhaps it may assist our readers somewhat if we describe at length the pecu-
liarities of thii giant example of the travelling propensities of modern Englishmen.

One dark night in the year 1784, the venerable clergyman of the little village of Redruth was taking an evening
.walk in a long and lonely lane leading to his church, when his ears were suddenly assailed by a most unearthly noise,
and, to his horror, he beheld approaching him, at a furious speed, an indescribable creature of legs, arms, and wheels,
whose body seemed glowing with internal fire, and whose rapid gasps for breath appeared to denote some deadly
struggle within. His cries for help brought to his assistance a gentleman of the name of Murdoch, who, no doubt to
his infinite relief, explained to him that this terrific apparition, which he had taken for the Evil One himself, was a
runaway locomotive -which he, Mr. Murdoch, the inventor and proprietor, had incautiously allowed to escape from its
leading strings. In this way was the First Locomotive, which was ultimately to exercise so important an influence
on the progress of civilisation, introduced into the world; but the world was not yet prepared to receive it, and for nearly
twenty years nothing was done towards the practical application of Mr. Murdoch's idea. In the year 1804, Messrs.
Trevithick and Vivian, of Camborne, near Redruth, patented and constructed the first actual useful locomotive, of which
we give a side and an end view. It consisted of a cylindrical boiler containing a tube of the |J shape, one end of which

formed the furnace, whilst to the other was con-
nected the chimney. As all our readers know
by this time, the power of the steam is conveyed
to the wheels through the medium of the piston.
This is made of metal, and slides in a cylinder,
like the bucket of a pump in the barrel; and
the steam being first let on to one side of it,
forces it in one direction, and then on the other
side, to force it in the other direction, and so
keeps up the motion. The piston has a rod in
the centre, passing through the cover at one end
of the cylinder, to the end of which is at-
tached a connecting rod, which takes hold of a
pin in one of the spokes of the wheel, and turns
it just as a man's arm turns a coffee mill;
only that, instead of the power of beef and
bread being conveyed through an arm of
bone and flesh, the cheaper material, coke,
and the more durable ones, iron and brass, are substituted. The engraving shows this primitive arrangement; and
if the tales of adventurous travellers, who have penetrated into the remote coal districts of Wales, are to be believed, some-
thing very similar is yet in existence. In this case, the cylinder a is partially sunk into the boiler, and the power is trans*
mitted through the rods bb to the wheels cc. An extraordinary misconception for a long period obstructed the use of
locomotives. It was gravely alleged that the wheels would turn round without the engine advancing; and this notion
having once got abroad, people would hardly be persuaded to the contrary even when they saw it with their own eyes.
Much money and ingenuity were expended in making steam walking machines, in which legs and feet pushed the
engine along. It was not until 1814, when the great George Stephenson constructed a locomotive for the Killingworth
Colliery, that all these crude ideas were swept aw ay, and from that time we may date the introduction of the locomotive
system. From that date to 1823, when the Liverpool and Manchester Railway was projected, Mr. Stephenson and
others spent large sums of money in improving the details of the engine; so that on the opening of that ran way a very
excellent performance was at once attained, and the'benefits of the railway system began to be appreciated. The
great superiority of the engines used on this line over that just described arose from the use of a boiler containing a
number of tubes or small flues, through which the flame passed, and which generated steam much more ran'dry than
the former boiler with a single large tube through it.

Since that date, the increase of power that has taken place may be judged from a glance at the leviathan " Lord of
the Isles," on the other page. This, it will be remembered, is one of the ordinary class of engines constructed by the
toat \, estem Company since 1847. It is capable of taking a passenger-train of 120 tons at an average speed of sixty