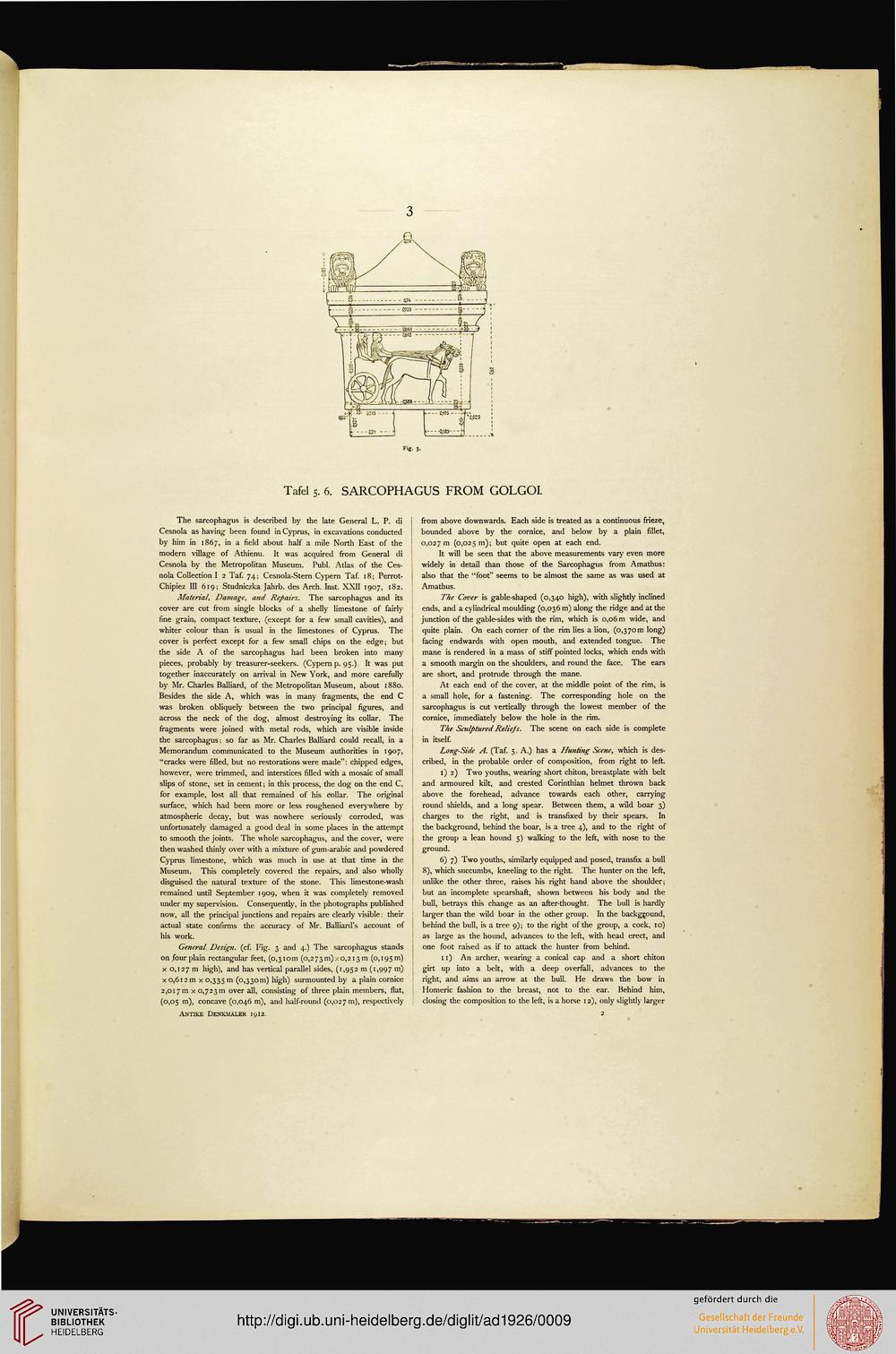 The sarcophagus is described by the late General L. P. di
Cesnola as having been found in Cyprus, in excavations conducted
by him in 186;, in a field about half a mile North East of the
modern village of Athiemi. It was acquired from General di
Cesnola by the Metropolitan Museum. Publ. Atlas of the Ces-
nola Collection I 2 Taf. 74; Cesnola-Stern Cypern Taf. 18; Perrot-
Chipiez III 619; Studniczka Jahrb. des Arch. Inst. XXII 1907, 182.

Material, Damage, and Repairs. The sarcophagus and its
cover are cut from single blocks of a shelly limestone of fairly
fine grain, compact texture, (except for a few small cavities), and
whiter colour than is usual in the limestones of Cyprus. The
cover is perfect except for a few small chips on the edge; but
the side A of the sarcophagus had been broken into many
pieces, probably by treasurer-seekers. (Cypern p. 95.) It was put
together inaccurately on arrival in New York, and more carefully
by Mr. Charles Balliard, of the Metropolitan Museum, about 1880.
Besides the side A, which was in many fragments, the end C
was broken obliquely between the two principal figures, and
across the neck of the dog, almost destroying its collar. The
fragments were joined with metal rods, which are visible inside
the sarcophagus: so fax as Mr. Charles Balliard could recall, in a
Memorandum communicated to the Museum authorities in 1907,
"cracks were filled, but 110 restorations were made": chipped edges,
however, were trimmed, and interstices filled with a mosaic of small
slips of stone, set in cement; in this process, the dog on the end C,
for example, lost all that remained of his collar. The original
surface, which had been more or less roughened everywhere by
atmospheric decay, but was nowhere seriously corroded, was
unfortunately damaged a good deal in some places in the attempt
to smooth the joints. The whole sarcophagus, and the cover, were
then washed thinly over with a mixture of gum-arabic and powdered
Cyprus Hmestone, which was much in use at that time in the
Museum. This completely covered the repairs, and also wholly
disguised the natural texture of the stone. This Hmestone-wash
remained until September 1909, when it was completely removed
under my supervision. Consequently, in the photographs published
now, all the principal junetions and repairs are clearly visible: their
actual State confirms the aecuraey of Mr. Balliard's aecount of
his work.

from above downwards. Each side is treated as a continuous frieze,
bounded above by the cornice, and below by a piain fillet,
0,027 m (°)°25 m); but quite open at each end.

It will be seen that the above measurements vary even more
widely in detail than those of the Sarcophagus from Amathus:
also that the "foot" seems to be almost the same as was used at
Amathus.

The Cover is gable-shaped (0,340 high), with shghtly inclined
ends, and a cylindrical moulding (0,036 m) along the ridge and at the
junetion of the gable-sides with the rim, which is 0,06 m wide, and
quite piain. On each corner of the rim lies a Hon, (0,370 m long)
facing endwards with open mouth, and extended tongue. The
mane is rendered in a mass of stiff pointed locks, which ends with
a smooth margin on the Shoulders, and round the face. The ears
are short, and protrude through the mane.

At each end of the cover, at the middle point of the rim, is
a .small hole, for a fastening. The corresponding hole on the
sarcophagus is cut vertically through the lowest member of the
cornice, immediately below the hole in the rim.

The SculpturedReliej's. The scene on each side is complete
in itself.

Long-Side A. (Taf. 5. A.) has a Hunting Scene, which is des-
cribed, in the probable order of coniposition, from right to left.

I) 2) Two youths, wearing short chiton, breastplate with belt
and armoured kilt, and crested Corinthian helmet thrown back
above the forehead, advance towards each other, carrying
round shields, and a long spear. Between them, a wild boar 3)
charges to the right, and is transfixed by their spears. In
the background, behind the boar, is a tree 4), and to the right of
the group a lean hound 5) Walking to the left, with nose to the
ground.

6) 7) Two youths, similarly equipped and posed, transfix a bull
8), which suecumbs, kneeling to the right. The hunter on the left,
unlike the other three, raises his right hand above the Shoulder;
but an incomplcte spearshaft, shown between his body and the
bull, betrays this change as an after-thought. The bull is hardly
larger than the wild boar in the other group. In the background,
behind the bull, is a tree 9); to the right of the group, a cock, 10)
as large as the hound, advances to the left, with head erect, and
one foot raised as if to attack the hunter from behind.

II) An archer, wearing a conical cap and a short chiton
gilt up into a belt, with a deep overfall, advances to the
right, and aims an arrow at the bull. He draws the bow in
Homeric fashion to the breast, not to the ear. Behind him,
closing the composition to the left, is a horse 12), only slightly larger