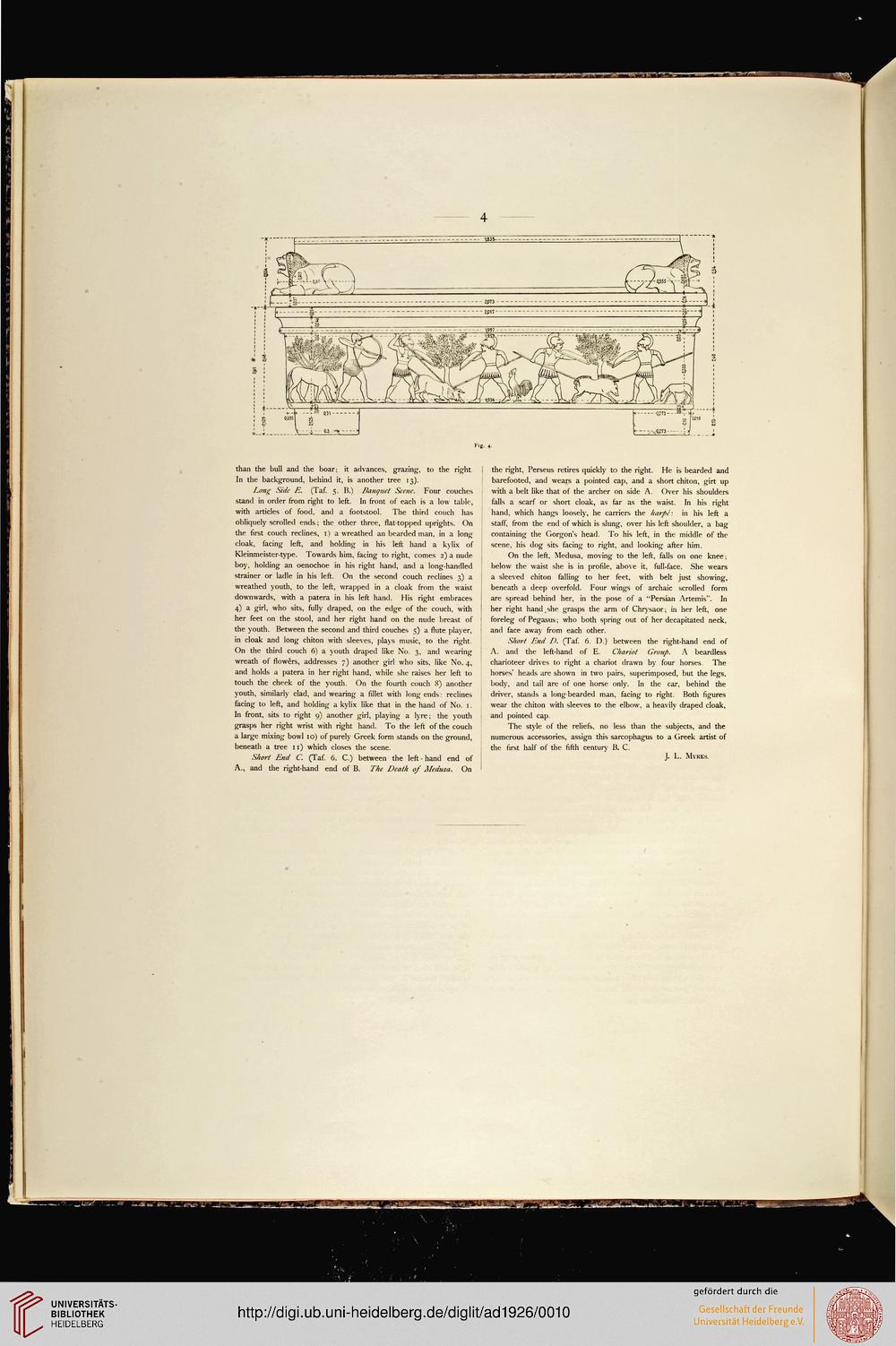 Information about OCR text
than the bull and the boar; it advances, grazing, to thc right
In the background, behind it, is another tree 13).

Lang Side F.. (Taf. 5, B.) Hauquet Scene. Four couches
stand in order from right to left. In front of each is a low table,
with articles of food, and a footstool. The third couch has
obliquely scrolled ends; thc other thrce, Hat topped uprights. (In
the first couch reclines, 1) a wrcathed an bearded man, in a long
cloak, facing left, and holding in bis left band a kylix of
Kleinmeister-type. Towards him, facing to right, comes 2) a nude
boy, holding an oenochoe in his right band, and a long-handled
strainer or ladle in his left. On the second couch reclines 3) a
wreathed youth, to the left, wrapped in a cloak from the waist
downwards, with a patera in his left hand. His right embraces
4) a g'r'. wh° sits, fu"y draped, on the edge of the couch, with
her feet on the stool, and her right hand on the nude breast of
the youth. Between the second antl third couches 5) a flute player,
in cloak and long chiton with sleeves, plays music, to the right.
On the third couch 6) a youth draped like No, 3, and wcaring
wreath of flowers, addresses 7) another girl who sits, like No. 4,
and holds a patera in her right hand, while she raises her left to
touch the check of the youth. On the fourth couch S) another
youth, similarly clad, and wearing a fillet with long ends reclines
facing to left, and holding a kylix like that in the hand of No. 1.
In front, sits to right 9) another girl, playing a I>re; the youth
grasps her right wrist with right hand. To the left of the couch
a large mixing bowl 10) of purely Greek form Stands on the ground,
beneath a tree 11) which closes the scene.

the right, Perseus retires quickly to the right. Hc is bearded and
barefooted, and wears a pointed cap, and a short chiton, girt up
with a belt like that of the archer on side A Over his Shoulders
falls a scarf or short cloak, as far as the waist. In his right
hand, which hangs loosely, he carriers the hmfc: in his left a
staff, from the end of which is slung, over his left Shoulder, a bag
containing the Gorgon's head. To his left, in thc middle of the
scene, his dog sits facing to right, and looking after him.

On the left, Medusa, moving to the left, falls on one knee;
below the waist she is in profile, above it, full-face. She wears
a sleeved chiton falling to her feet, with belt just showing,
beneath a deep overfold. Four wings of archaic scrolled form
are spread behind her, in the pose of a "Persian Artemis". In
her right hand.she grasps the arm of Chrysaor; in her left, one
foreleg of Pegasus; who both spring out of her decapitated neck,
and face away from each other.

Short F.nd />. (Taf. 6 D.) between the right-hand end of
A. and the left-hand of E. Chariot Croup. A beardless
charioteer drives to right a chariot drawn by four horses. The
horses' heads are shown in two pairs, superimposed, but the legs,
body, and tail are of one horse only. In the car, behind the
driver, Stands a long bearded man, facing to right. Both figures
wear the chiton with sleeves to the elbow, a heavily draped cloak,
and pointed cap

The style of the reliefs, no less than the subjects, and the
numcrous accessories, assign this sarcophagus to a Greek artist of
the first half of the fifth Century B. C.