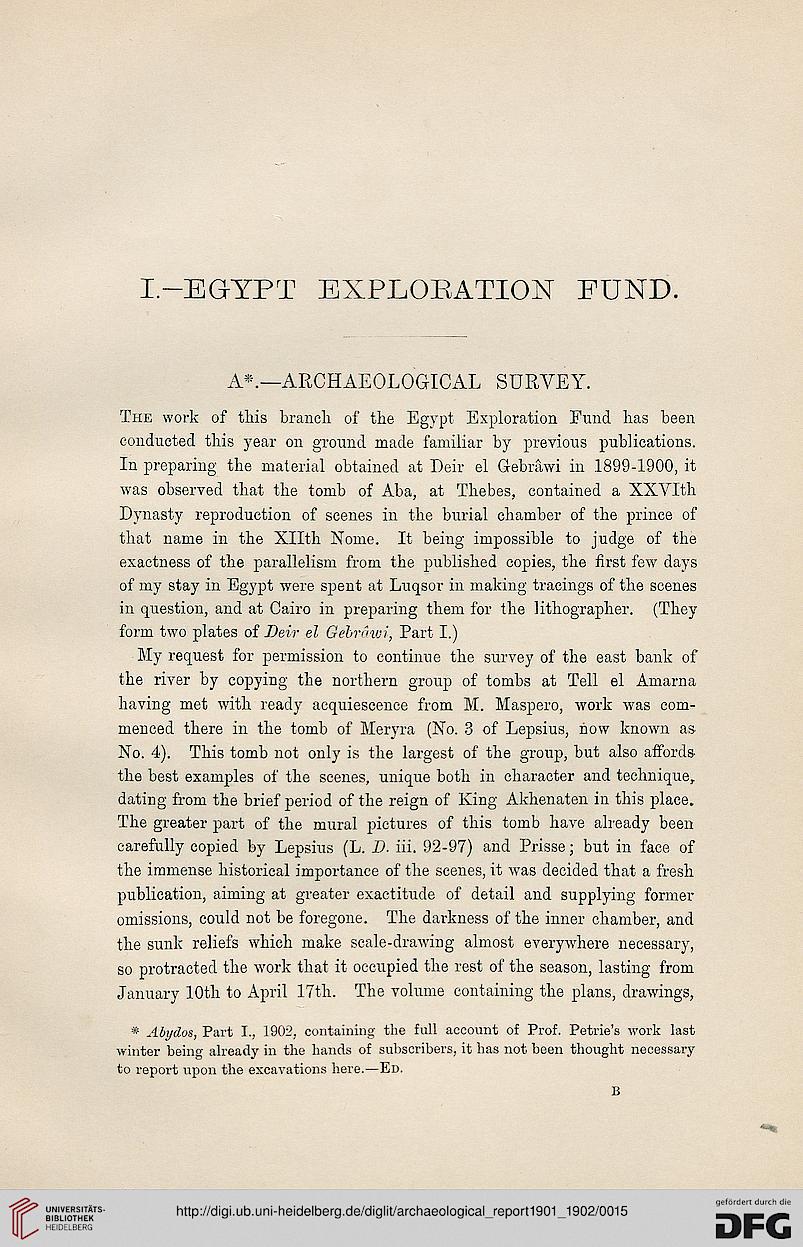 The work of this branch of the Egypt Exploration Fund has been
conducted this year on ground made familiar by previous publications.
In preparing the material obtained at Deir el Gebrawi in 1899-1900, it
was observed that the tomb of Aba, at Thebes, contained a XXVIth
Dynasty reproduction of scenes in the burial chamber of the prince of
that name in the Xllth Nome. It being impossible to judge of the
exactness of the parallelism from the published copies, the first few days
of my stay in Egypt were spent at Luqsor in making tracings of the scenes
in question, and at Cairo in preparing them for the lithographer. (They
form two plates of Deir el Gebraivi, Part I.)

My request for permission to continue the survey of the east bank of
the river by copying the northern group of tombs at Tell el Amarna
having met with ready acquiescence from M. Maspero, work was com-
menced there in the tomb of Meryra (No. 3 of Lepsius, now known as
No. 4). This tomb not only is the largest of the group, but also affords
the best examples of the scenes, unique both in character and technique,
dating from the brief period of the reign of King Akhenaten in this place.
The greater part of the mural pictures of this tomb have already been
carefully copied by Lepsius (L. D. iii. 92-97) and Prisse; but in face of
the immense historical importance of the scenes, it was decided that a fresh
publication, aiming at greater exactitude of detail and supplying former
omissions, could not be foregone. The darkness of the inner chamber, and
the sunk reliefs which make scale-drawing almost everywhere necessary,
so protracted the work that it occupied the rest of the season, lasting from
January 10th to April 17th. The volume containing the plans, drawings,

* Abydos, Part I., 1902, containing the full account of Prof. Petrie's work last
winter being already in the hands of subscribers, it has not been thought necessary
to report upon the excavations here.—Ed.