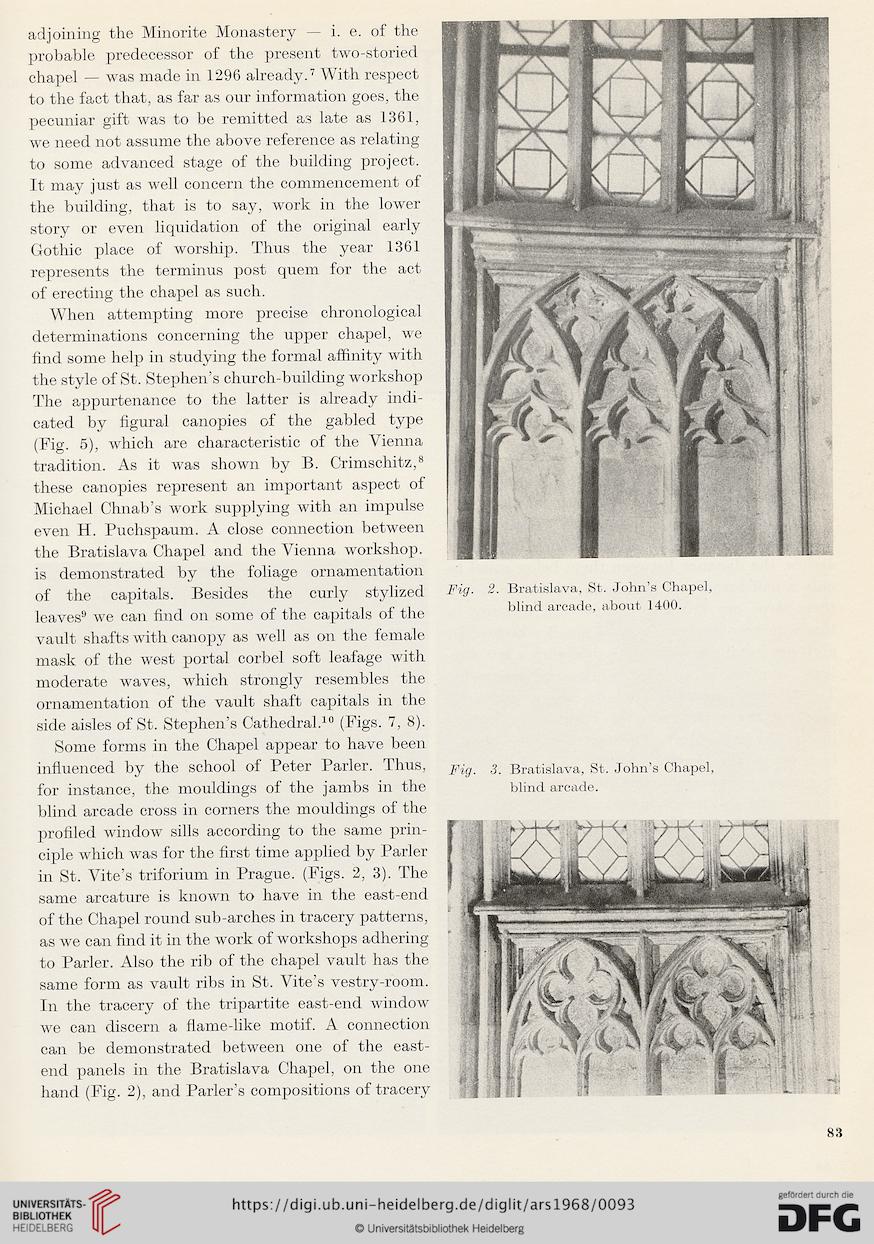 Information about OCR text
adjoining the Minorité Monastery — i. e. of the
probable predecessor of the present two-storied
chapel — was made in 1296 already.7 With respect
to the fact that, as far as our information goes, the
pecuniar gift was to be remitted as late as 1361,
we need not assume the above reference as relating
to some advanced stage of the building project.
It may just as well concern the commencement of
the building, that is to say, work in the lower
story or even liquidation of the original early
Gothic place of worship. Thus the year 1361
represents the terminus post quem for the act
of erecting the chapel as such.
When attempting more précisé chronological
déterminations concerning the upper chapel, we
find some help in studying the formai affinity with
the style of St. Stephen’s church-building workshop
The appurtenance to the latter is already indi-
cated by figurai canopies of the gabled type
(Fig. 5), which are characteristic of the Vienna
tradition. As it was shown by B. Crimschitz,8
these canopies represent an important aspect of
Michael Chnab’s work supplying with an impulse
even H. Puchspaum. A close connection between
the Bratislava Chapel and the Vienna workshop.
is demonstrated by the foliage ornamentation
of the capitals. Besides the curly stylized
leaves9 we can find on some of the capitals of the
vault shafts with canopy as well as on the female
mask of the west portai corbel soft leafage with
moderate waves, which strongly resembles the
ornamentation of the vault shaft capitals in the
side aisles of St. Stephen’s Cathédral.10 (Figs. 7, 8).
Some forms in the Chapel appear to hâve been
influenced by the school of Peter Parler. Thus,
for instance, the mouldings of the jambs in the
blind arcade cross in corners the mouldings of the
profiled window sills according to the same prin-
ciple which was for the first time applied by Parler
in St. Vite’s triforium in Prague. (Figs. 2, 3). The
same arcature is known to hâve in the east-end
of the Chapel round sub-arches in tracery patterns,
as we can find it in the work of workshops adhering
to Parler. Also the rib of the chapel vault has the
same form as vault ribs in St. Vite’s vestry-room.
In the tracery of the tripartite east-end window
we can discern a flame-like motif. A connection
can be demonstrated between one of the east-
end panels in the Bratislava Chapel, on the one
hand (Fig. 2), and Parler’s compositions of tracery