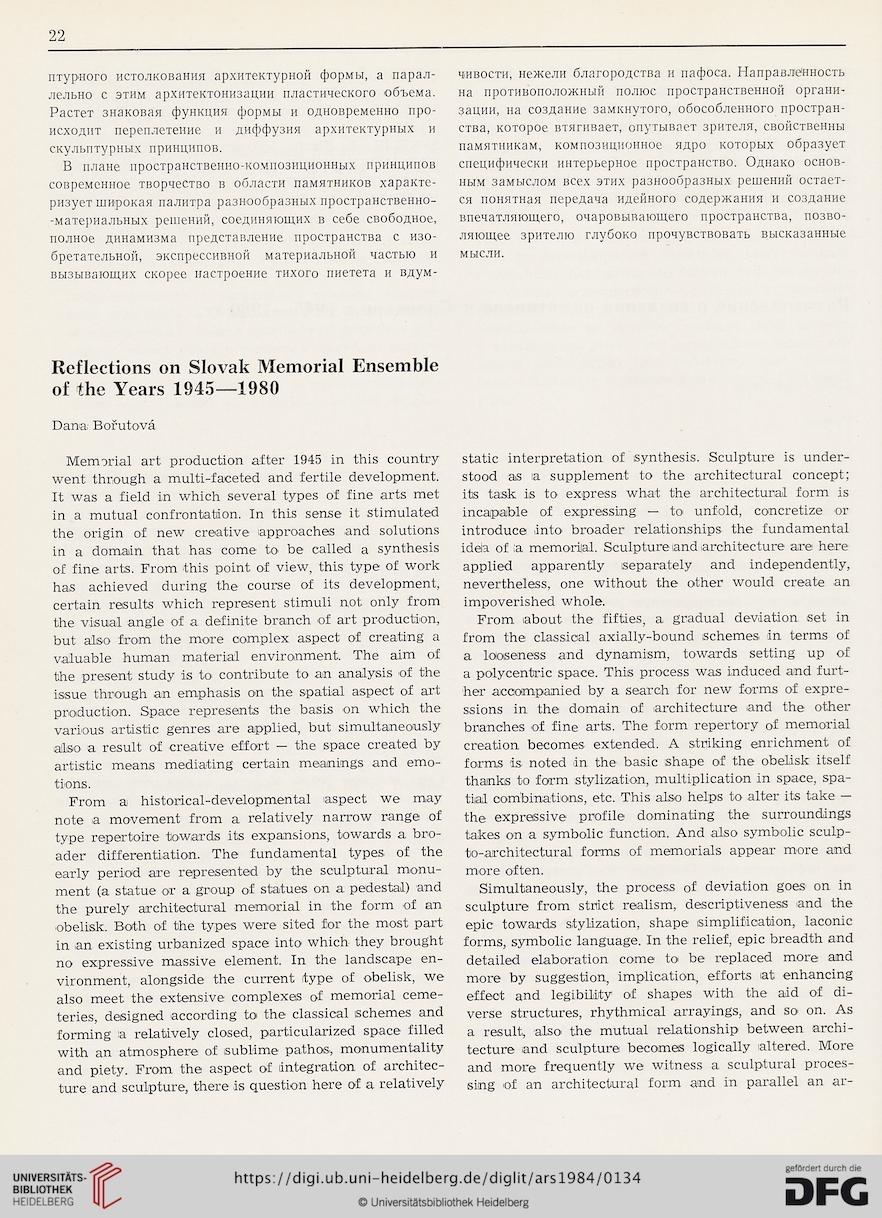 Reflections on Slovák Memorial Ensemble
of the Years 1945—1980
Dana Bořutová
Memorial art production after 1945 in this country
went through a multi-faceted and fertile development.
It was a field in which several types of fine arts met
in a mutual confrontation. In this sense it stimulated
the origin of new créative approaches and solutions
in a domain that has corne to be called a synthesis
of fine arts. From this point of view, this type of work
has achieved during the course of its development,
certain results which represent Stimuli not only from
the Visual angle of a definite branch of art production,
but also from the more complex aspect of creating a
valuable human material environment. The aim of
the present study is to contribute to an analysis of the
issue through an emphasis on the spatial aspect of art
production. Space représente the basis on which the
various artistic genres are applied, but simultane ously
also a resuit of créative effort — the space created by
artistic means mediating certain meanings and émo-
tions.
From a historical-developmental aspect we may
note a movement from a relatively narrow range of
type répertoire towards its expansions, towards a bro-
ader différentiation. The fundamental types of the
early period are represented by the sculptural monu-
ment (a statue or a group of statues on a pedestal) and
the purely architectural memorial in the form of an
obelisk. Both of the types were sited for the most part
in ,an existing urbanized space into which they brought
no expressive massive element. In the landscape en-
vironment, alongside the current type of obelisk, we
also meet the extensive complexes of memorial ceme-
teries, designed according toi the classical ischemes and
forming ia relatively closed, particularized space filled
with an atmosphère of sublime pathos., monumentality
and piety. From the aspect of intégration of architec-
ture and sculpture, there is question here of a relatively

static interprétation of synthesis. Sculpture is under-
stood as ia supplément to the architectural concept;
its task is to express what the architectural form is
incapable of expressing — to unfold, concretize or
introduce Into· broader relationships the fundamental
ideia of ia memorial. Sculpture and architecture are here
applied apparently iseparately and independently,
nevertheless, one without the other would create an
impoverished whole.
From about the fifties, a graduai déviation set in
from the classical axially-bound schemes. in ternis of
a loioseness and dynamism, towards setting up of
a polycentric space. This process was induced and furt-
her accompanied by a search for new forms of expre-
ssions in the domain of architecture and the other
branches of fine arts. The form repertory of memorial
création becomes extended. A striking enrichment of
forms is noted in the basic shape of the obelisk itself
thainks to form stylization, multiplication in space, spa-
tial combinations, etc. This also helps to alter its take —
the expressive profile dominating the surroundings
takes on a symbolic function. And also symbolic sculp-
to-architectural forms of memorials appear more and
more often.
Simultaneously, the process of déviation goes on in
sculpture from strict realism, descriptiveness and the
epic towards stylization, shape simplification, laconic
forms, symbolic language. In the relief, epic breadth and
detailed élaboration corne to be replaced more and
more by suggestion, implication, efforts iat enhancing
effect and legibility of shapes with the aid of di-
verse structures, rhythmical arrayings, and so on. As
a resuit, also, the mutual relationship between archi-
tecture >and sculpture becomes logically altered. More
and more frequently we witness a sculptural Proces-
sing of an architectural form and in parallel an ar-