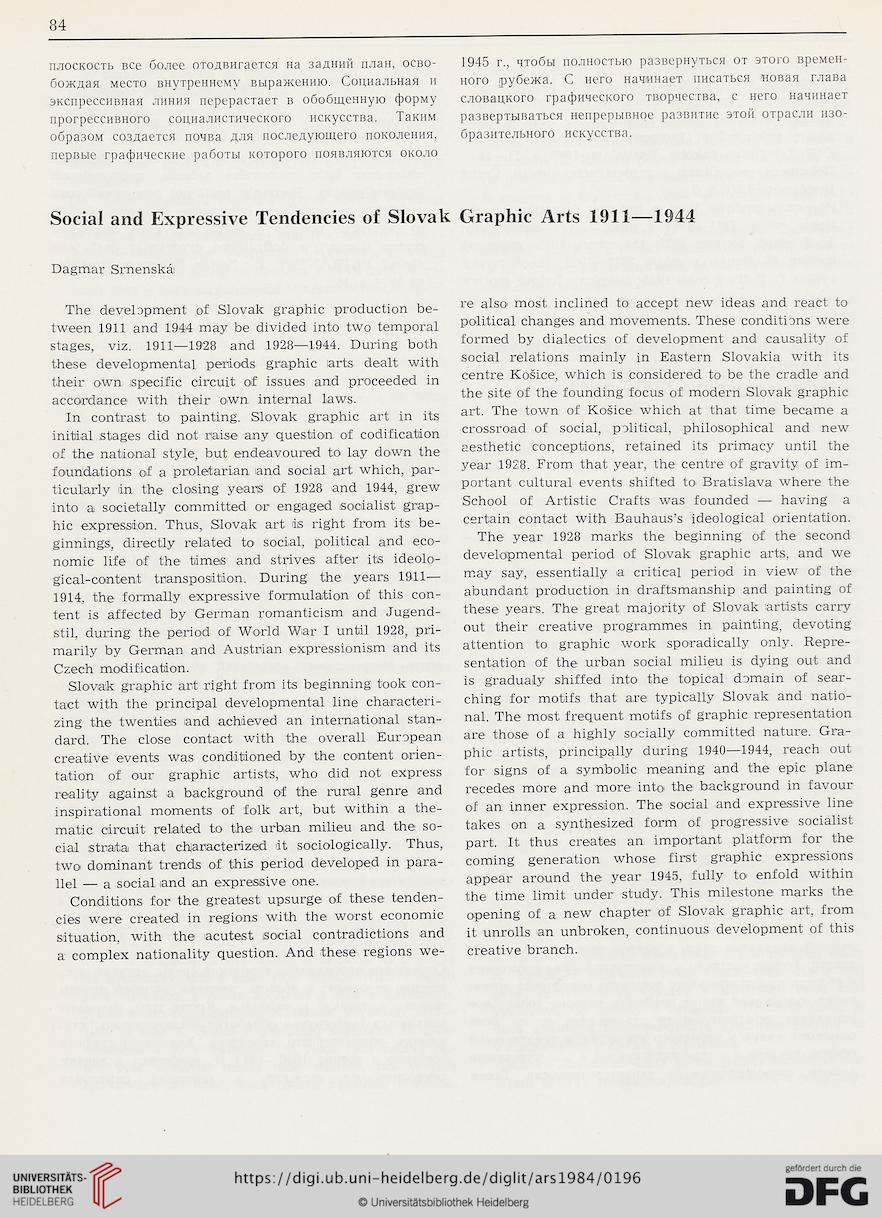 Dagmar Srnenská
The development of Slovák graphie production be-
tween 1911 and 194'4 may be divided into two temporal
stages, viz. 1911—1928 and 1928—1944. During both
these developmental pernods graphie larts dealt with
their own spécifie circuit of issues and proceeded in
accordance with their own internal laws.
In contrast to painting. Slovák graphie art in its
initial stages did not naise any question of codification
of the national style, but endeavoured to lay down the
foundations of a proletarian and social art which, par-
ticularly in the closing years of 1928 and 1944, grew
into a societally committed or engaged socialist grap-
hie expression. Thus, Slovák art is right from its be-
ginnings, direetly related to social, political and éco-
nomie life of the times and strives after its ideolo-
gical-content transposition. During the years 1911—
1914, the formally expressive formulation of this con-
tent is affected by German romanticism and Jugend-
stil, during the period of World War I until 1928, pri-
marily by German and Austrian expressionism and its
Czech modification.
Slovalk graphie art right from its beginning took con-
tact with the principal developmental line characteri-
zing the twenties and achieved an international stan-
dard. The close contact with the overall European
créative events was conditioned by the content orien-
tation of our graphie artists, who did not express
reality against a background of the rural genre and
inspirational moments of folk art, but within a the-
matic circuit related to the urban milieu and the so-
cial strata that characterized it sociologically. Thus,
two dominant trends of this period developed in para-
llel — a social iand an expressive one.
Conditions for the greatest upsurge of these tenden-
cies were created in régions with the worst économie
situation, with the acutest social contradictions and
a complex nationality question. And these régions we-

re also, most inclined to accept new ideas and react to
political changes and movements. These conditions were
formed by dialectics of development and causality of
social relations mainly in Eastern Slovakia with its
centre Košice, which is considered to be the cradle and
the site of the founding focus of modern Slovák graphie
art. The town of Košice which at that time became a
crossroad of social, political, philosophical and new
aesthetic conceptions, retained its primacy until the
year 1928. From that year, the centre of gravity of im-
portant cultural events shifted to· Bratislava where the
School of Artistic Crafts was founded — having a
certain contact with Bauhaus’s ideological orientation.
The year 1928 marks the beginning of the second
developmental period of Slovák graphie arts, and we
may say, essentially a critical period in view of the
abundant production in draftsmanship and painting of
these years. The great majority of Slovák artists carry
out their créative programmes in painting, devoting
attention to graphie work sporadically only. Repre-
sentation of the urban social milieu is dying out and
is gradualy shiffed into the topical domain of sear-
ching for motifs that are typically Slovák and natio-
nal. The most frequent motifs of graphie représentation
are those of a highly socially committed nature. Gra-
phie artists, principally during 1940—1944, reach out
for signs of a symbolic meaning and the epic plane
recedes more and more into the background in favour
of an inner expression. The social and expressive line
takés on a synthesized form of progressive socialist
part. It thus créâtes an important platform for the
coming génération whose first graphie expressions
appear around the year 1945, fully to enfold within
the time limit under study. This milestone marks the
opening of a new chapter of Slovák graphie art, from
it unrolls an unbroken, continuons development of this
créative branch.