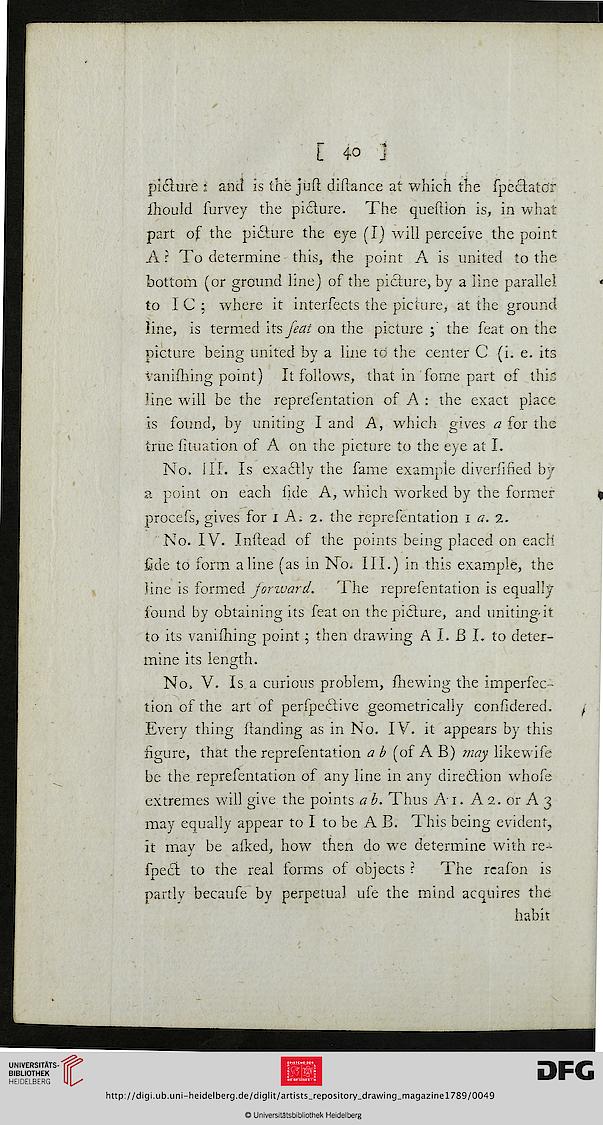 Information about OCR text
pidlure i and is the just distance at which the speclator
should survey the picture. The question is, in what
part of the picture the eye (I] wall perceive the point
A? To determine this, the point A is united to the
bottom (or ground line) of the picture, by a line parallel
to I C ; where it intersects the picture, at the ground
line, is termed its feat on the picture ; the seat on the
picture being united by a line to the center C (i. e. its
vanishing point) It follows, that in sorne part of this
line will be the representation of A : the exact place
is found, by uniting I and A, which gives a for the
true siliation of A on the picture to the eye at I.
No. III. Is exactly the same example diversified by
a point on each side A, which worked by the former
process, gives for x A. 2. the representation 1 a. 2.
No. IV. Instead of the points being placed on each
side to form aline (as in No. III.) in this example, the
line is formed forward. The representation is equally
found by obtaining its seat on the picture, and uniting-it
to its vanishing point; then drawing A I. B I. to deter-
mine its length.
No, V. Is a curious problem, shewdng the imperfec-
tion of the art of perspeclive geometrically considered.
Every thing (landing as in No. IV. it appears by this
figure, that the representation a b (of A B) may likewise
be the representation of any line in any diredlion whose
extremes will give the points a b. Thus Ai. A 2. or A 3
may equally appear to I to be A B. This being evident,
it mav be asked, how then do we determine with re-
spect to the real forms of objects ? The rcason is
partly because by perpetual use the mind acquires the
habit