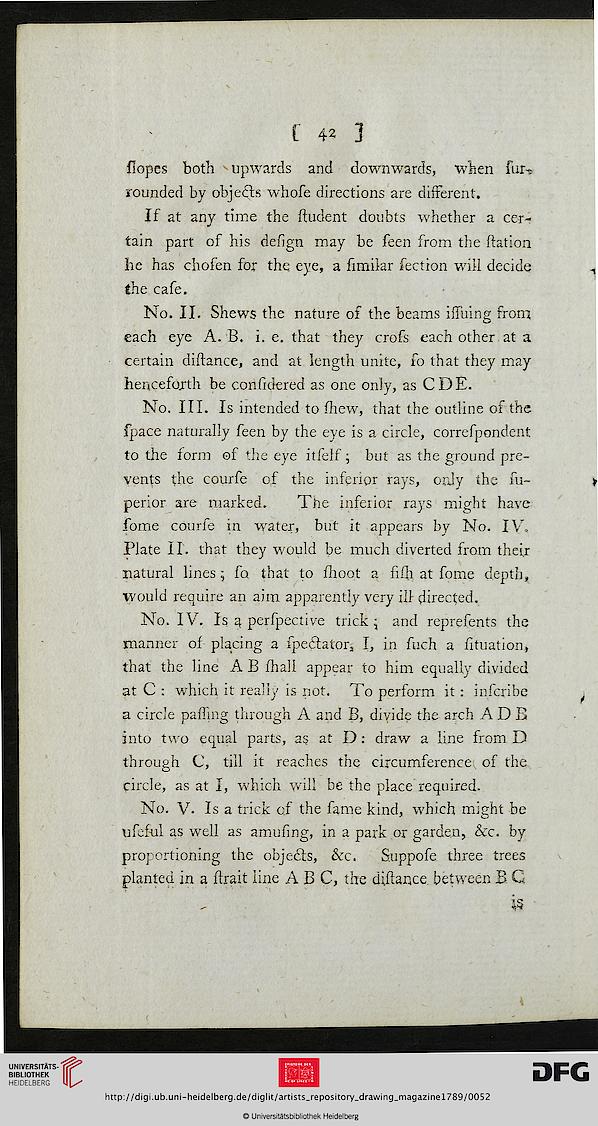 Information about OCR text
C 42 3
{lopes both upwards and downwards, when sur-*
rounded by objects whose directions are different.
If at any time the student doubts whether a cer-
tain part of his design may be seen from the station
he has chofen for the eye, a similar section will decide ^
the case.
No. II. Shews the nature os the beams isTuing from
each eye A. B. i. e. that they crofs each other at a
certain distance, and at length unite, so that they may
henceforth be considered as one only, as CDE.
No. III. Is intended to shew, that the outline of the
space naturally seen by the eye is a circle, correspondent
to the form of the eye itself; but as the ground pre-
vents the course of the inferior rays, only the su- *
perior are marked. The inferior rays might have
some course in W'ater, but it appears by No. IV.
Plate II. that they would be much diverted from their
natural lines; so that to shoot a fisti at some depth,
would require an aim apparently very ill directed.
No. IV. Is a perspective trick ; and represents the
manner of placing a spedlator, I, in such a sttuation,
that the line A B shall appear to him equally divided
at C : which it really is not. To perform it: inseribe ,
a circle palling through A and B, divide the arch A D B
into two equal parts, as at D: draw a line from D
through C, till it reaches the circumference of the
circle, as at I, which will be the place required.
No. V. Is a trick os the same kind, which might be
useful as well as amusmg, in a park or garden, Sec. by
proportioning the objects. Sec. Suppose three trees
planted in a sfrait line ABC, the distance between B C
is