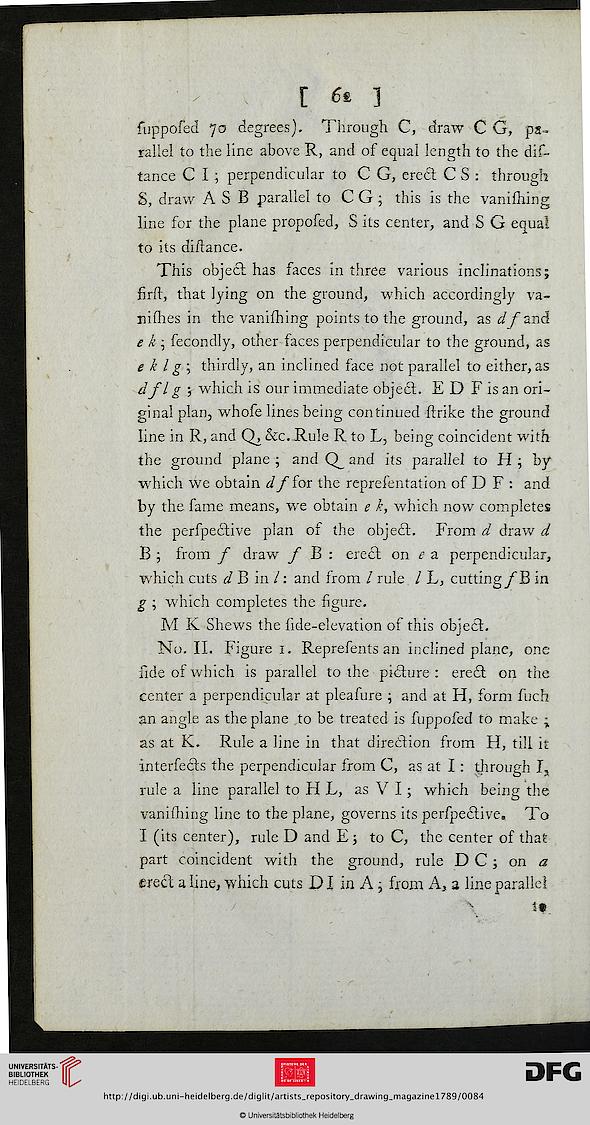 Information about OCR text
[ 6* ]
supposed 70 degrees). Through C, draw C G, pa-
rallel to the line above R, and of equal length to the dis-
tance C I ; perpendicular to C G, erect C S : through
S, draw A S B parallel to CG; this is the vanishing
line for the plane proposed, S its center, and S G equal
to its distance.
This object has faces in three various inclinations;
first, that lying on the ground, which accordingly va-
nishes in the vanishing points to the ground, as d f and
e k ; secondly, other faces perpendicular to the ground, as
e k Ig\ thirdly, an inclined face not parallel to either,as
df I g ; which is our immediate object. E D F is an ori-
ginal plan, whose lines being continued strike the ground
line in R, and &c. Rule R to L, being coincident with
the ground plane ; and Q_ and its parallel to H ; by
which we obtain d f for the reprefentation of D F : and
by the same means, we obtain e k, which now completes
the perspedtive plan of the object. From d draw d
B ; from f draw f B : erect on ea perpendicular,
which cuts d B in /: and from / rule I L, cutting_/B in
g ; which completes the figure.
M K Shews the side-elevation of this object.
No. II. Figure 1. Represents an inclined plane, one
side of which is parallel to the picture : eredt on the
center a perpendicular at pleasure ; and at H, form such
an angle as the plane to be treated is supposed to make ;
as at K. Rule a line in that direction from FI, till it
intersects the perpendicular from C, as at I : through I,
rule a line parallel to H L, as V I; which being the
vanishing line to the plane, governs its perspective. To
I (its center), rule D and E; to C, the center of that
part coincident with the ground, rule DC; on a
erect a line, which cuts DI in A; from A, a line parallel
\ ts